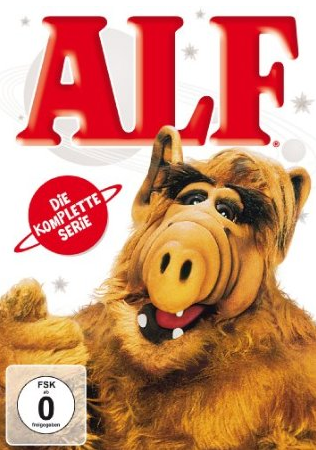 A few weeks ago, when I finished my reviews of season one, I opened the floor to donations to buy the ALF Complete Set of German Funfun. The reason was that this set, as far as I could tell, was the only one that contained uncut episodes, and I thought it might be a little more fair to the show to review those versions moving forward.

Of course, I didn’t actually expect there to be much interest, but there were four brave little toasters who pitched in:
– Casey Roberson
– Eric Lemoine
– Alessandro Arzilli
– Kevin Loy

A fifth asked if he could send me a donation through the post. Nothing’s come through yet, but if it does I’ll be sure to thank him as well.

Between those four, nearly the entire cost of the box set was covered. I was happy to pitch in the rest, and, as you saw from my review of “Working My Way Back to You,” it did indeed arrive in time for me to cover season two.

So, as a way of saying thanks, I figured I’d do a little mini-review of the physical contents themselves. I don’t know if there are any bonus features, but if there are I’ll cover them at some point. The episodes, of course, will be covered in sequence SO DON’T RUSH ME. 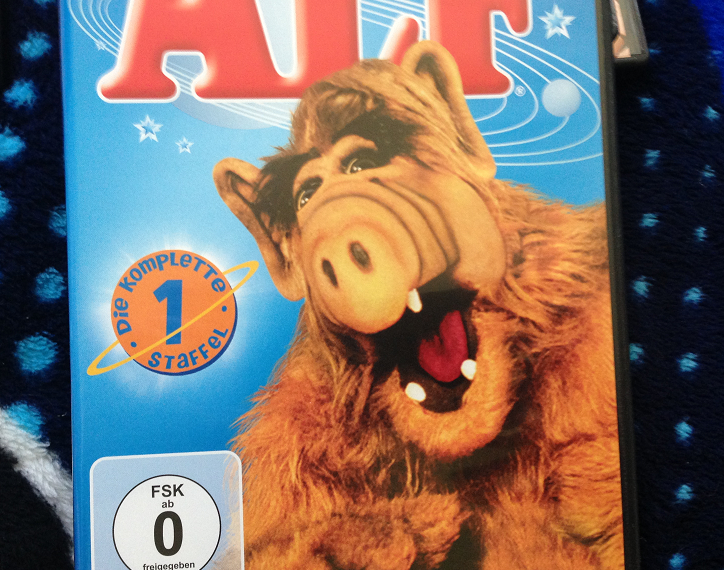 The box itself is just a cardboard slip that houses copies of the individual season releases. These are standard-width cases, and there’s a nice little hinge in there that lets you flip through the four DVDs that each case contains.

Why is it that crappy shows make these much more convenient packaging decisions? As much as I love those super deluxe mega awesome rockem-sockem collector’s releases of the things I actually enjoy, I sure do hate having to fold things out and dig through envelopes and packing bonuses to get to the fucking disc.

Speaking of which, I know the individual season releases here in the States are much thicker than this. Does anyone have one of those? Do they come with booklets or something?

For some reason, every single picture of ALF that they chose to use is terrifying.

Seriously, the puppet isn’t scary. So why is every photo of it the stuff of nightmare? 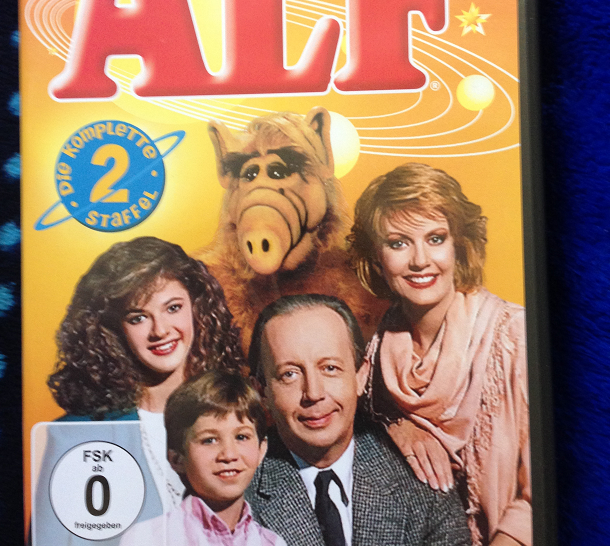 Here’s the DVD for season two. It’s the only one I’ve done anything with so far, but eventually I’ll have to circle back around to season one to review the scenes cut from syndication.

This picture of ALF makes him look like he’s seriously beefed up. That’s a terrifying prospect for reasons I’d prefer not to put into words.

Additionally, each of the season boxes contains one of these: 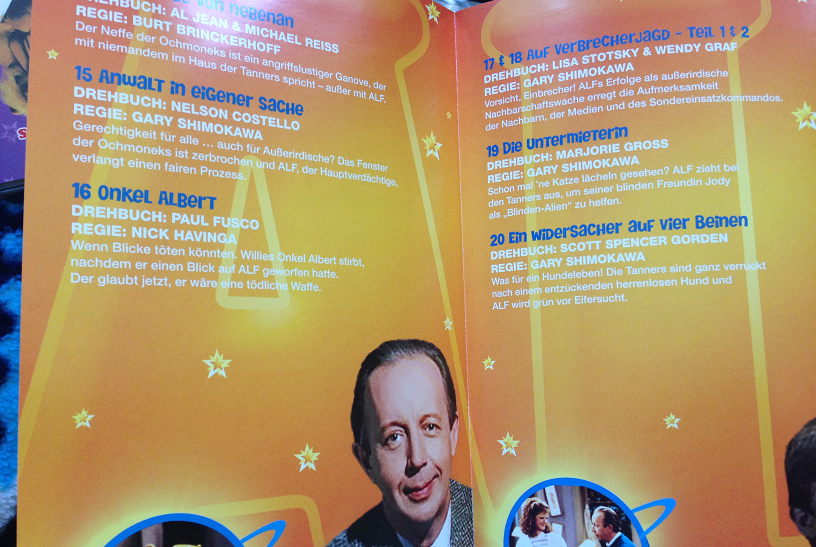 It’s nothing special, just a little foldout card that lists the episodes and a brief description of each. At least, I assume it does; I can’t read this scary Melmacian script.

I also notice that at least one of the episode titles is not a straight translation. “We’re So Sorry, Uncle Albert” is truncated here to what I’m sure translates as just “Uncle Albert.” Maybe at some point I’ll pump these into a translator (or ask commenter Marleen, our German correspondent) so that I can find out if other changes were made from the original titles. Maybe certain puns or song titles wouldn’t work with a straight translation into German. Either way I’m a nerd and I am curious so get out of my way. 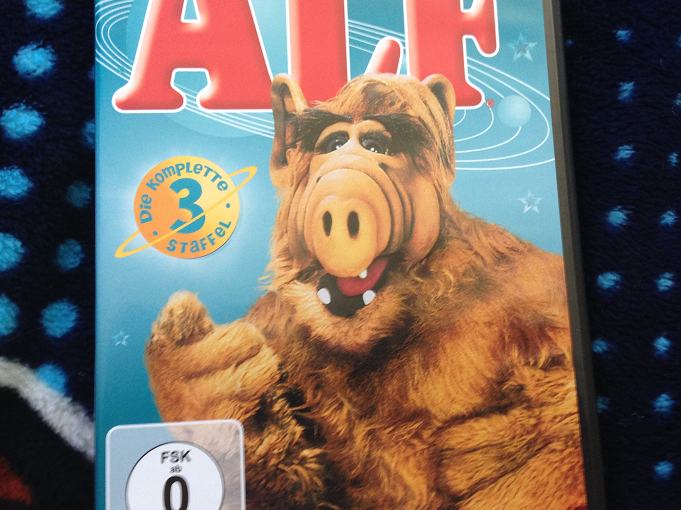 The cover for season three makes it look like he’s beckoning me into the back of a van. 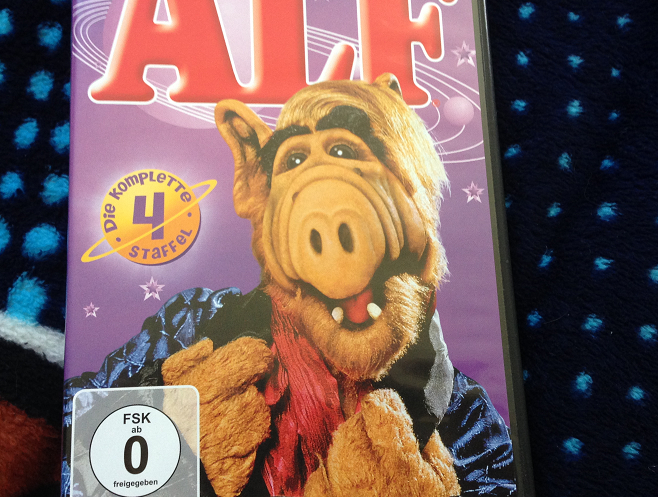 The cover for season four definitely looks a bit stupid, but it’s the least terrifying, so I’ll take it. The funny thing comes when you flip that one over: 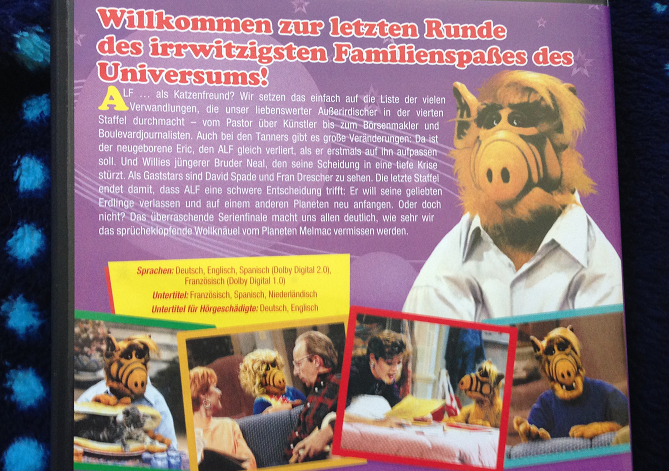 Man, does ALF not look like even he’s fed up with this show? Such a stench of defeat wafting off of that puppet there.

There’s not much to say about the backs of the cases because I can’t read them, but I will point out because I’m a pedantic shit that the pictures on each do not reflect the actual contents of that season and I’m really sad that I know that.

Each season is spread across four discs, and something about the images they chose really bothers me. For every disc they use a different promotional shot of one of the characters. But each time, it’s ALF, Willie, Brian and Lynn.

Granted, I know there are only four discs in each season, but they couldn’t cycle Kate into at least one set? Or even use a shot of both her and Willie together or something? I can’t exactly say why, but this rubs me the wrong way. Of course, if I had it my way I’d exclusively use pictures of Kate, Mr. Ochmonek, the little girl that wanted to kill ALF and the scampering midget, so what do I know. 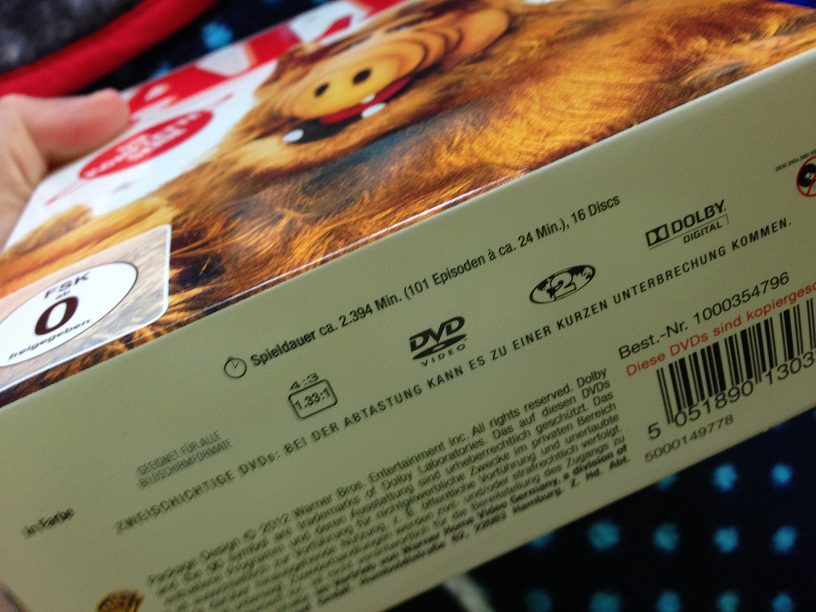 The bottom of the box helpfully identifies exactly how much of my life I’ll waste watching this shit. 2,394 minutes.

That makes me sad, thinking about how much I could do with 2,394 minutes. Then I realize that I wouldn’t actually do any of it, so whatever.

It also lists 101 episodes. I’m only aware of 99, plus the Project ALF movie, which I don’t believe is included here. Maybe there are some episode-length featurettes or something. We’ll find out.

Anyway, as an additional thanks to those who donated to the cause, I have a gift. 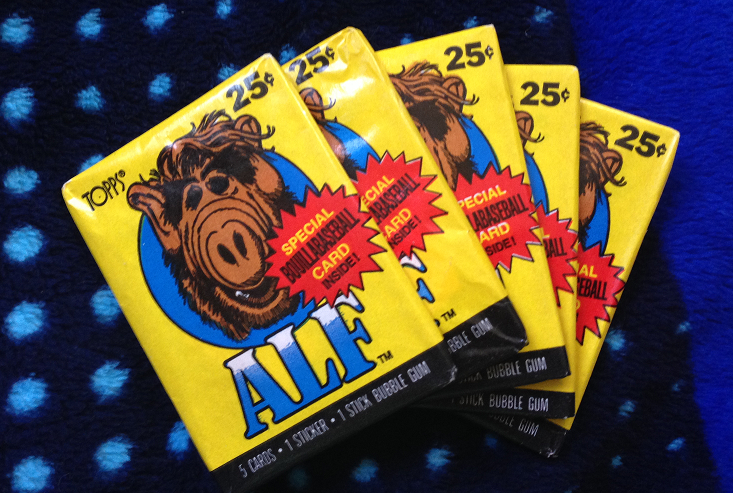 Courtesy of reader / tormentor Jon Wahlgren, I’ve come into the possession of five sealed packs of ALF trading cards. If any of you four generous donators would like one, shoot me a message with your mailing address. Each of them comes with a stick of gum, which I’m positive is delicious.

I’ll keep the fifth pack and review that at some point. Or if (FOR SOME REASON) you are entitled to a pack of cards and don’t want them, I’ll keep those to review as well.

Anyway, thanks, everyone. Casey, Eric, Alessandro and Kevin especially, but a sincere thanks to everyone else who reads these, makes funnier jokes in the comments than I do, and occasionally calls me an asshole.

I love you all.