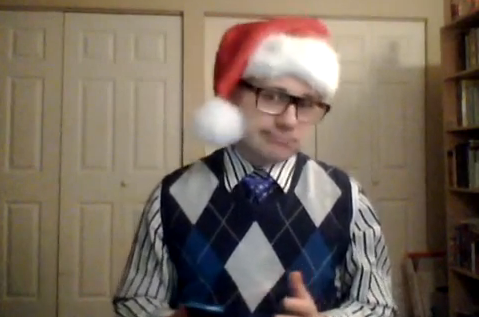 As a reminder, tune in right here on Wednesday, December 24, at 8 p.m. Eastern time. That’s Christmas Eve, and I’ll be hosting the Second Annual Noiseless Chatter Xmas Bash. Just visit this page and join us.

I’m still working on getting everything set up. It’s a lot of work, so I wanted to take a moment to explain why I’m doing this, and why I appreciate everyone who participates.

Many of you were probably not around this time last year. I’ve gained a lot of momentum with this site in the past 12 months, and I couldn’t be happier about that. If that’s the case for you, what you missed was a night of terrible Christmas specials streamed live, with a chat room, and some host segments recorded by me.

There wasn’t much to it. Everything I streamed came right from my Hulu account. Difficulties took the form of everything from echoing sound to the entire stream being taken down before its proper conclusion. And the host segments were off the cuff and probably boring as all fuck.

So why am I doing it again?

Because something crazy happened last year: people actually showed up.

See, I didn’t invest much time or effort in the stream (at least not in comparison to this year’s) because I had no clue if anyone would bother tuning in. Worst case scenario is that I and a few friends would watch some shitty TV together, so it’s not like there was much at stake, but as the night went on and the number of viewers hit the hundreds and stayed there…I was genuinely amazed.

The chat room became the unexpected highlight of the stream. Not only were people there…funny people were there. They kept the momentum going while I struggled to get my technical issues sorted out. They provided funnier commentary on the host segments than anything I was doing in the host segments. (My particular favorite observation came early, the suggestion that I looked and sounded like I was running an NPR pledge drive. It became my favorite running joke of the night…if only because it relieved me of the responsibility of creating minutes-long stretches of painful anticomedy.)

In short, it was a bigger success than I expected. Another stream the following year was a foregone conclusion.

But then…well…we had this year.

And this year, I think it’s safe to say, fucking sucked.

I’m not kidding. This has been a terrible year on a global scale. Whether it’s innocent people getting their personal information and / or private photographs leaked, artists being openly threatened by their audiences with murder and rape, beloved funnymen killing themselves and having years of alleged sexual assault uncovered, shootings by the week, fatal reminders that racism is not only still a very serious issue but is somehow getting worse…

Those are just the, for lack of a better term, highlights. Part of the reason I haven’t been as active in writing for this site over the course of the past year is…well, Jesus Christ, just read that last paragraph again. What kind of world is this?

My year — and I feel almost guilty for admitting this — has been pretty great by contrast. I found an excellent job, was a very busy and productive writer, pitched a few book ideas, collected and published two volumes of The Lost Worlds of Power, got my own place (again!), and entered into a relationship with a beautiful, brainy, supportive woman that I care about deeply. Again, those are the highlights. And because I’m an endlessly neurotic mess, my first thought when realizing how good I’ve had it is that so many others are having it much worse.

And I have evidence of this. After Robin Williams took his own life, I opened the floor to others who suffered from depression. The response was heartbreaking.

Here were people I didn’t know, opening up not only to a stranger (me) but to everybody who would ever see what they wrote. They were taking their deepest, most painful feelings and sharing them, openly.

I know that isn’t an easy thing to do. I was touched. I run some dumbass website that reviews ALF for Christ’s sake. Maybe now and then I say something worth reading. Maybe not. But if the small number of visitors / readers / passers-by had so much to share along those lines, it’s staggering to imagine how much people are going through (silently, internally) on a larger scale.

Offline, as a result, I tossed around the idea of a Mental Health Scholarship. I ran through the logistics with some friends and professionals. What I wanted to do was put some money aside (my savings), and offer it to somebody so that they could afford to pay for a therapist, or medication, that they otherwise couldn’t.

It meant a lot to me. I wanted to do this more than anything, and I spent months trying to make it work. Ultimately, however, there were too many obstacles. The one that bothered me most was that people would have to apply for this, and then while I might have been helping someone, there would have a lot of other someones who wouldn’t receive the scholarship. This would have been one more thing they needed that they weren’t getting, and I’d have felt terribly responsible for that.

Then there was the fact that someone could falsely apply for and receive the scholarship, then get the money and spend it on video games or candy or god knows what. Those were the two most troublesome concerns to me, but they were by no means the only ones.

One of my friends and supporters — Emily Suess, whom I’ve never met, but whom I value deeply, and whom I am richer for knowing — gave me the cleanest piece of advice I had during that whole time: don’t worry about it. You’re not a charity. Find an actual charity that does what you’d like to do, and give the money to them.

Sometimes it takes someone on the outside to help you see how simple a solution really is.

And I did exactly that. I knew I wanted to benefit a mental health charity — for personal reasons — and The Trevor Project was exactly what I was looking for.

Or, no. It wasn’t. It was a lot better, because it’s not a one-off scholarship program; it’s ongoing help, assistance, and counseling for LGBTQ youths that suffer from depression and other mental health issues. Within a few days I was on the phone with one of their outreach coordinators, and we spoke about how we could make this work (officially) as part of this year’s Xmas stream. They’d handle all the logistics of actually collecting and handling the donations, and they were grateful for the offer. (I was twice as grateful, I’m sure, in return.)

I still intend to donate that money. (I won’t mention the amount, because it’s embarrassingly paltry.) Only by attaching this to the stream, I’m increasing the amount of that donation, hopefully significantly. I’m taking some small piece of good that I could have done, and turning it into something larger, to benefit more people, to make a bigger impact. And I’m allowing others to join in that gesture of kindness, to help make this world — this dangerous, frightening, cruel world — more liveable for those who might otherwise find themselves unhappily at the end.

The spirit of the stream, I hope, will remain the same. Yes, it’s attached to a charity, and yes, I encourage you to donate if you can afford to do so. Beyond that?

It’s still a collection of terrible Christmas specials. It’s still a drunk and rowdy chatroom. It’s still hosted by a guy who’s much funnier in print than he is in person.

But last year, the holiday miracle was that we got together at all. And it was something I valued (and continue to value) very much.

This year we can pull off a much larger miracle, and help a lot of people who won’t be having as merry a Christmas, by doing the exact same thing.

That is why I’m handling the second stream the way that I am. I feel obligated to make that known, and I hope you join in the fun.

4 thoughts on “Live Stream Wednesday; but why?”