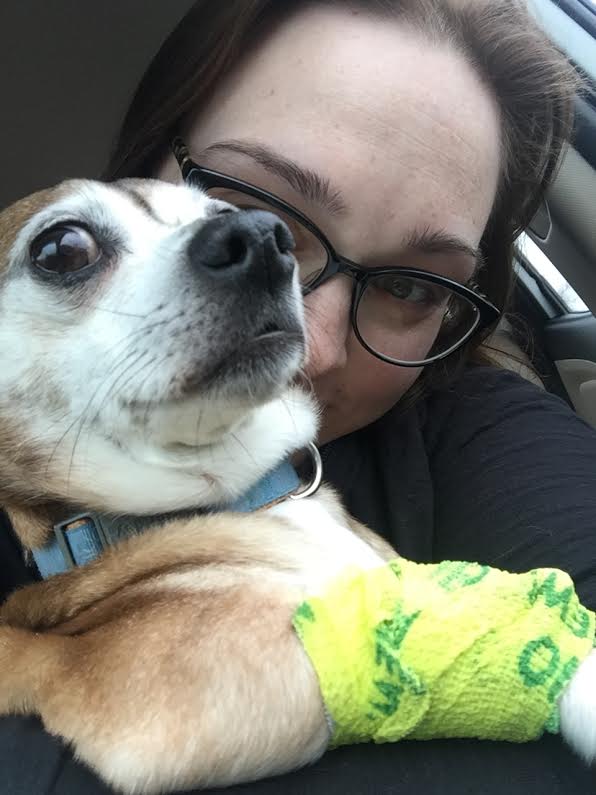 Above you’ll find a picture of Bono. The dog, not the human. (The human Bono is not pictured.)

A few days ago we received some unfortunate news.

Bono stopped eating. My girlfriend made an appointment for him with the vet. In the meantime, he started eating again. That was good, but then, just as suddenly, he stopped a second time. And he stopped having bowel movements as well.

He went to the vet. They weren’t sure what the issue was. He didn’t seem to be in pain, and he seemed healthy otherwise.

They X-rayed him. They saw nothing.

They asked if we wanted them to perform an ultrasound. We didn’t really have a choice. Not that the vet was pressuring anybody…it’s simply that it was either have an ultrasound, or be okay with the fact that Bono wasn’t eating or going to the bathroom. In short, we’d have to be okay with knowing he was slowly dying. We went with the ultrasound.

They found that he had an obstruction. They wouldn’t be sure what it was until they opened him up. Did we want them to operate on him?

Yes, we wanted them to operate on him.

The vet said that the squeaker had been in him for around six weeks. The plastic by the time it was removed was black and warped. His body tried to process it. For a good while, he was able to eat and digest more or less normally, though he was probably feeling some amount of discomfort. Finally, at some point, it shifted, and it blocked him up. He could no longer eat.

The squeaker was in him long enough to do a lot of damage to his insides. He’s eating again, but we need to watch him to make sure he doesn’t throw it back up. If he does well for the next two weeks they’ll remove his staples…but there could still be other surgeries in his future, depending on how he heals.

Now I’ll tell you a little bit about Bono.

Bono’s a good dog. And a good friend.

But Bono’s been through a lot.

My girlfriend and I believe that when he was a puppy, somebody tried to kill him.

She adopted him from a rescue without knowing his history, but there was something clearly wrong. His back legs don’t function very well; instead of walking normally he uses them to hop, like a rabbit. His front legs are huge and muscular, as they do all the work of keeping him upright and mobile. He has at least one rib that was broken and which healed out of place. His eye, at some point, had popped out of his head and had to be replaced surgically.

I don’t know what he went through, but I know it was bad.

When he meets somebody new, he hides. He’s friendly, but he’s too afraid to act on that friendliness. He retreats from affection. He doesn’t trust people. I don’t blame him one bit.

He even took a long time to warm up to me. He’d come close, but when I reached out to pet him he’d flee. He clearly wanted the affection, but he couldn’t be sure that I wouldn’t betray him the way he’d been betrayed in the past. When you let somebody in and they hurt you like that, you don’t forget it.

Eventually he came to trust me. He’s a sweet dog with a big heart. He’s safe now, even if he carries with him memories that keep him scared.

I don’t want to lose Bono. My girlfriend wants to lose him even less.

He’s an important part of our family. He has a place there. He gets to live a life of love and comfort that he probably never thought he’d have.

And now…he may not live.

It was sad enough to find out that he needed surgery. But it didn’t end there. It was successful, but he still might succumb to infection or complications. And even if he doesn’t…he might simply not heal the way he needs to heal. His digestive tract was torn up pretty badly. It could be a matter of time.

The vet bill was around $3,000. That’s money that neither she nor I really have. But he’s family. We had to try. The vet said he was otherwise healthy. He could have another 10 years of life left in him. We had to try, even if we couldn’t afford it.

And more bills could be on the horizon, depending on how he heals. Or fails to heal.

I feel for the little guy. We have a lot in common.

Today I turn thirty-six. As I do so, this blog enters its sixth year of operation. In many ways, I wouldn’t have bet on either of us reaching these milestones.

I started Noiseless Chatter as an escape. I don’t mean that at all in a romantic sense; I mean that I had something — some things — that I needed to escape from. This was a way of…of continuing, really. Of keeping myself grounded, mentally and emotionally. Of having something to focus on that wasn’t the literal nightmare I was facing every day.

It was — and proudly remains — a profoundly unimportant site. Nothing here is urgent. Little of it is even timely. The world wouldn’t spin any differently tomorrow if there were no longer any of my wordy, meandering essays cluttering it up.

And yet, in a very real way, it saved me. It gave me something that I needed then. Not that I wanted, or desired, or wished for…but something that I really needed. Today, I don’t need it in that same way. Today, I’m better. Hell, I’ve been better for the overwhelming bulk of this site’s life.

But it’s still here. I don’t intend to quit. Because it still feels important to me. Important in its very unimportance.

On Inauguration Day I changed my mind about something. I had a silly post scheduled to go live. It was a bit satirical, but mainly silly. It was an obviously false essay about Donald Trump’s (invented) favorite films. That’s it. There’s probably the opportunity to get truly biting and vicious with that topic, but I thought the better joke would be something more like an anti-joke. Something that didn’t go for the easy targets…or, indeed, any targets. It was just there. It was the kind of thing where you’d read the headline and immediately guess what followed…except that none of it actually followed.

That’s what I changed my mind about on Inauguration Day. I didn’t post it. I just didn’t feel right about it. Not that I thought it was insulting or idiotic or rude or anything negative at all. I just knew that a lot of people would have strong feelings that day, and would open important dialogues, and would seek a kind of understanding…and I wasn’t going to (and couldn’t hope to) provide anything they might actually need.

I opted for silence over silliness.

I posted something to that effect on the Facebook page, to explain the lack of a post for the week.

Longtime reader and important human being Sarah Portland said this in response:

Don’t trivialize your work, even if it seems to pale in comparison to other things going on. Somewhere in your readership is someone looking for pause and breathe, a tiny corner of the world that isn’t screaming. It’s okay to be that corner.

I didn’t reply to that. I still don’t know that I effectively can. But it struck a chord deep inside of me.

That’s what Noiseless Chatter was to me, too, way back when I started it. A space to pause and breathe. A tiny corner of the world that wasn’t screaming.

I started this site to escape a nightmare. The topics I covered included just about everything apart from that nightmare. Because I needed the distance. And maybe other people do, too.

People now and then contact me thanking me for something I wrote. Sometimes they thank me for something I don’t even remember writing. One specific message came from somebody who was feeling deeply depressed…so he went all the way back to the beginning of the ALF reviews and started reading them again because he knew they’d make him laugh.

I’ve written some intensely trivial stuff on this blog. But to paraphrase Sarah, I shouldn’t trivialize the trivial.

It’s not there one day. It’s there another.

You go through things that should, by all rights, kill you. Then, maybe, they don’t. And things are dark for a while, and scary. You rear back from people that don’t intend to hurt you. You hide inside a shell that you promise yourself you’ll never break for anybody. Your life becomes an ongoing, perpetual response to whatever trauma it is that scarred you in the first place.

But then you meet someone. Or you find something. Or you’re touched in a way you didn’t expect to be touched by something you see, read, hear, or play.

Your life can change. You can open up. A little bit, anyway.

I still see a lot of reluctance in Bono. If I reach out too quickly to pet him, he’ll flinch. That’s because he remembers something. Something I wish I could take away from him.

All I can do is offer a little space for anyone who needs it. A place without fear or hate…or anger that isn’t directed at a farting, tapdancing alien.

I created that space for myself six years ago. The fact that anyone else, at all, turns to it now is important to me.

Let’s have a great year.

5 thoughts on “Six and Thirty-Six”