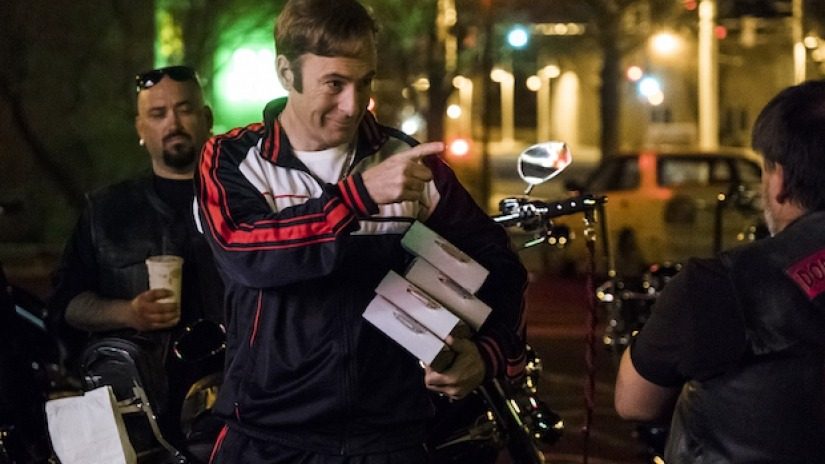 I’d have to rewatch to be sure, but it seems as though Better Call Saul hits its stride at about the mid-point of each season. The first few episodes tie up some old plot threads and introduce new ones. The final few build toward the concluding moments that will haunt us through the gap between seasons.

Or, in Jimmy’s case, where we know he ends up. “Quite a Ride” isn’t content to do what most episodes do, which is assume that we remember Breaking Bad well enough that every step Jimmy takes toward becoming Saul is going to register. Here, instead, we open with a definitive vision of the future.

For the first time in Better Call Saul, the shows overlap. Saul, in a panic, gathers some cash and a few necessities (including the shoebox that we know contains some important mementos), and has Francesca dispose of evidence. Walter White doesn’t make an appearance, but the tiny apocalypse he kicked off is in full swing. The scene ends with Saul placing the phone call that will turn him into Gene.

“It was a good scene” goes without saying. Of course it was. For a few minutes, we were actually watching a new piece of Breaking Bad. More interesting to me, though, was the idea that these two shows could, at least potentially, coexist.

Until now, Breaking Bad occupied one stretch of time, and Better Call Saul occupied the stretch before and after it.

“Quite a Ride” demonstrates that the show is willing, at least this once, to occupy that middle period. Which, in theory, could mean that Better Call Saul continues beyond the point at which it links up with Breaking Bad. While Walt and Jesse are off doing one thing, we can watch Saul do something else.

I don’t know if that approach excites or worries me more. Personally, I do love this show, but I don’t know how effective it will remain if it continues beyond the firm, definitive establishment of Saul Goodman. That feels like an important termination point for the Jimmy McGill we know. It’s as conclusive as Walter White bleeding on the floor. Once we get to that point, the story’s been told.

We’ll see. I’m inventing possibilities and worrying about them. That’s what I do.

In “Quite a Ride,” we find almost every character at a low ebb. Kim is possibly rediscovering her love of the law, but one client demonstrates to her that her hard work is not appreciated and the other (unknowingly) prevents her from fulfilling her obligations to Mesa Verde. Something’s going to give. She promises Mesa Verde that it won’t happen again. Whether she’s correct or not, something important to her is going to be lost. Kim fenced herself into a no-win situation.

Howard is still reeling from Chuck’s death, and the responsibility Jimmy allowed him to bear for it. We only got one scene with Howard, but it was plenty. It was funny and harrowing by turns, and I’m interested to see where the show takes the character.

And then there’s Jimmy, whose cellphone gambit last week indeed paid off. He gets the further idea this week to purchase a trunkload of them himself and peddle them at a high markup on the streets…which also pays off. He pushes his luck a little further with some burly bikers and…that pays off, too.

At some point in this sequence, something clicked for me. I had the realization that this was an important factor in Jimmy becoming Saul. He keeps testing his boundaries, seeing what he can get away with…and he keeps getting away with it. He’s tempting fate to intervene, and as long as fate doesn’t, it’s easier and easier for him to let his morality go.

Then, of course, Jimmy is mugged by people he tried to sell to earlier in the night. In a much more brutal reflection of Kim’s situation (mirrors are an important visual motif in “Quite a Ride”) Jimmy ended up manufacturing his own conflict.

He goes home and washes his face and gives Kim roughly half the story. Which, I suspect, is more than Kim shares with him about her story. Neither of them are talking about what they’re really up against, what they’re really facing, what’s really keeping them from being happy.

And, of course, because fate intervened, he spends his next day at work scraping his latest scam off the windows.

I keep hoping that Kim’s exit from Jimmy’s life will be something along the lines of her waking up one morning and realizing she needs a change. She piles her stuff into a car, leaves a note for Jimmy, and disappears forever.

Narratively, that wouldn’t satisfy at all. I realize that.

But I care about Kim. Shit, I care about Jimmy, too, but as this episode reminded me, I already know where he ends up. I love him and I want him to hold on but I already know he doesn’t. He won’t. Better Call Saul, so far, is a show designed to assure us that he could have and chose not to.

Kim, though…I don’t want to see Kim become her own equivalent of Saul. And I don’t want her breaking down at a bathroom sink. And I don’t want her dying in a house fire. Seeing Francesca again was absolutely great, but it was yet another reminder of what Jimmy McGill reduces people to. In Better Call Saul‘s timeline, she’s still a sweet, bubbly, supportive human being. The flash-forward here reminds us that Jimmy broke her, shattered her sense of ethics, introduced her to the wonders of greed.

At the end of “Quite a Ride,” Jimmy has his monthly check-in with the Probation and Parole Division. He’s asked about his plans for the future, and he glides without thinking into a monologue about starting another law firm with Kim…a bigger one…a better one…building his reputation so much that people will recognize him as a damned good lawyer…

His PPD representative cuts him off. “Lawyer” was all he needed. But Jimmy so easily told that tale because he really believes it.

He knows what he did. He knows he resold his store’s product illegally. He knows he manipulated people at best and actively supported their own illegal dealings at worst. And he knows he got the living shit kicked out of him in a cold parking lot at one-thirty in the morning.

But he still thinks he can get this right.

When he sees the future, he sees that Kim’s still there.

“Quite a Ride” showed us the actual future for a reason.

One thought on “Better Call Saul Reviews: “Quite a Ride” (season 4, episode 5)”