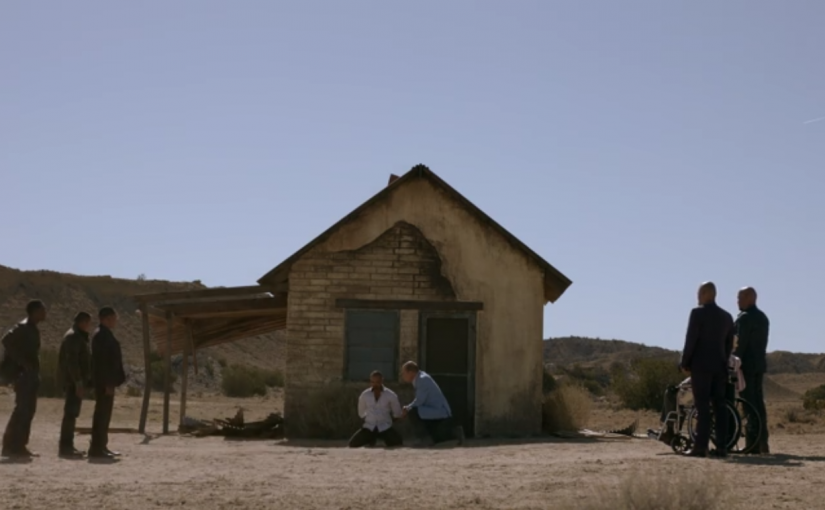 There are good deaths and there are bad deaths.

A main character has died. Someone who has been with the show from the start is no more. A man who, just a few episodes ago, probably believed he could find a way out now knows that there is no way forward.

His story is over. This was his final chapter. He saw the end closing in on him, and he let it come, because he made all of his decisions long ago and all he’s left with are the consequences.

He only has one decision left to make. There are good deaths and there are bad deaths. He can’t change the end of the story, but he can choose how to punctuate it.

Last week, I spoke about the way in which Better Call Saul often feels like a series of disconnected stories. I wondered if those stories would all be brought together for the show’s climax. I also wondered if, instead, they wouldn’t, and they’d all just resolve themselves separately.

“Rock and Hard Place” proves that the show is willing to let them resolve separately. I presented that as the lesser option, and I stand by that in a broad sense, but if these smaller endings are even half as impactful as “Rock and Hard Place” was, then I concede that Better Call Saul knows what it’s doing, and I am more than content to watch it play out.

Here’s the thing with Nacho: We watched him make nearly all the decisions that brought him to this point. We were there. We didn’t see the start of his drug-dealing journey, but we learned everything that mattered. We watched him get in deeper, we watched him realize he was in too deep, and now we watch him accept responsibility for what he’s done.

He’s there, alone, on his knees in the dirt, hands bound, surrounded by those who will make sure that he does not leave alive. The closest thing he has to a friend in the entire world beat the living shit out of him last night.

And, of course, we keep flipping over to Saul and Kim. We see them continue to make their choices. “Rock and Hard Place” assures us, by sheer virtue of proximity, that their choices bring them closer to this kind of end than another.

Thanks to Breaking Bad, that’s not all we know. We know that Saul makes it to that show and survives it. For how long? That’s a fair question, and it’s still not impossible that he eventually meets a similar, if longer-deferred, end for himself. Kim, though, is another story. Kim’s ending hasn’t been written yet. We’re moving closer to whatever her final chapter is, though, and she’s making her own decisions about how to behave, how deep to get, how much to compromise whatever is left of her conscience.

Nacho showed us what can happen. He led by example. He knew better, and so do Saul and Kim. They’ve still got 10 episodes to get it together. We know at least one of them won’t. Time is running out.

The real choice in this episode, of course, is Saul’s. Some legal minds behind the scenes have figured out that they let Eduardo slip away, and it was thanks to Saul’s handiwork. Kim presents him with an easy way out: He can claim that he didn’t know about Eduardo’s real identity, and he’ll be off the hook in exchange for whatever information he can provide about his ex-client.

Jimmy, almost touchingly, feels lost. It’s such an easy out that it hurts to see him conflicted like this. That faint, possibly final, flicker of Jimmy inside leaves him confused. One choice brings him more money from very wealthy clients. The other choice brings him back onto the correct and safer side of the law.

He turns to Kim, pleading with his eyes for guidance. He already knows the answer, I’m sure, but he needs to hear it.

Realizing he was near the end of his story, Nacho did what he could to make things right. He confirmed that his father was okay and said, in his own way, his farewell. He bargained with Gus and Mike for the safety of the man. He offered up his own life, knowing that it was the only thing he had left. He allowed himself to be captured, beaten, and humiliated. He willingly stepped into the lions’ den to come face to face with his own killers.

He didn’t make the right choices, but he set the right example. He understood the severity of the situation. He respected the consequences that he brought upon himself. He made sure that nobody else would be hurt, and then he faced those consequences. Nacho accepted responsibility for what he did. Kim, by contrast, is steering Saul away from doing that.

Nacho could have kept running, leaving his father to fend for himself. Kim could have told Saul to give it up, exchanging a bigger payday for a safer life. But that’s not how it happened. When the show started, I don’t think any of us would have been able to predict that Nacho would show us the right way at the same time that Kim showed us the wrong way.

There are good deaths and there are bad deaths. Nacho doesn’t want either of them, but he’s left himself with nothing else. It doesn’t matter how lucrative the drug trade is when you end up dead, alone in the dirt. He knew better, but he gave it a shot anyway. On some level, he understood that it would have to end like this, but he made those decisions anyway, and now he is dead.

He does manage to turn a good death into a better death, at least going out on his own terms. Gus offered him one way out. The Salamancas offer him a worse way out. He found a third option, but that third option still, in the end, looks a lot like the first two. He died with a little more dignity, but what use is dignity when you’re dead?

Kim’s decisions are bringing her — and Saul — closer to a situation in which there’s only one choice left to make, at best. There are good deaths and there are bad deaths. She knows better, but she’s giving it a shot anyway. We’ve seen many characters across this show and Breaking Bad who didn’t even get the luxury of that final choice. If she pisses off the wrong people, she won’t, either.

This is our second week in a row without Eduardo. We know, ultimately, where he’s headed, but it will be interesting to see who he visits first.