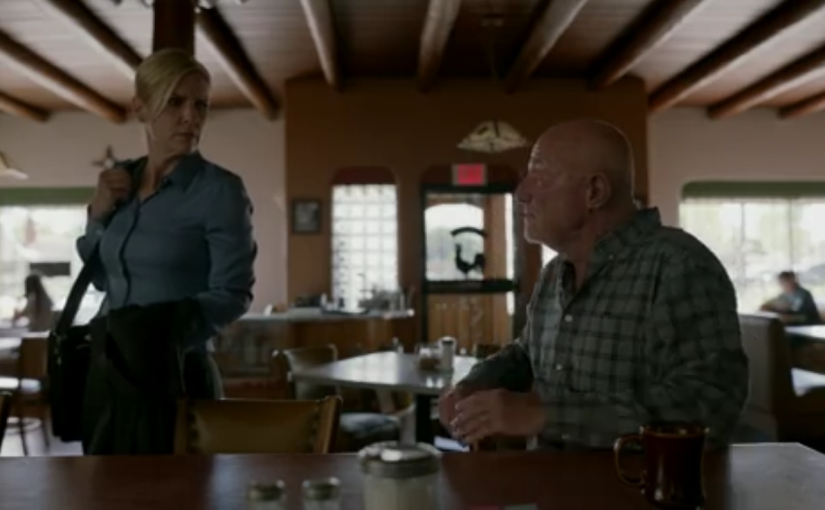 Last week, I closed out my review of “Rock and Hard Place” with this observation: “This is our second week in a row without Eduardo. We know, ultimately, where he’s headed, but it will be interesting to see who he visits first.”

I obviously had no idea that that would be the central question of “Hit and Run,” but I feel pretty darn satisfied that it was! Of course, this is now three weeks without Eduardo showing up, and every second that ticks by only increases the tension for everyone who is waiting for him. In the audience, yes, but also in the show.

I am now wondering if, in “Wine and Roses,” Eduardo telling someone to shave so that he’d resemble him was a slight mislead. I and others were led to believe that Eduardo would use the man as a corpse, tricking people — at least briefly — into thinking that he himself had died.

This ploy would have to fall at numerous hurdles that Better Call Saul (like Breaking Bad) is typically good at navigating, though. The man’s dental records, fingerprints, blood type, DNA and god knows what else would establish that he weren’t Eduardo. Of course, the guy could be burned or killed in some other way that would make him impossible to identify, but then that would defeat the purpose of having matching facial hair.

“Hit and Run” might have shown us what Eduardo’s real plan is. Here, Saul dresses as and makes himself up to resemble Howard just enough for someone to believe it really was Howard in passing, from a distance. Eduardo might have the same idea: Have his doppelganger pop up somewhere, alive, so that word gets around. That would cause Mike or whomever else to start looking for him in the wrong place. Like a magician, he’d direct their attention somewhere, while doing whatever he plans on doing somewhere else.

I don’t know. Maybe the Howard impersonation thing was coincidental. (Side note: Considering this episode’s title and the fact that Saul had access to his car, I was anticipating much more horrific things to go down.) Then again, Gus has a double in this episode as well, so maybe I’m not completely out of my mind. Either way, we’ll find out, but it did make me wonder if that will be our ultimate payoff to that setup.

Speaking of “Wine and Roses,” I’ve been thinking back on the opening sequence to that episode. It is almost certainly meaningful, but I wasn’t quite able to figure out why. It’s got to amount to more than “Saul held on to that bottle stopper all these years.” That does mean something, but I don’t think it’s everything.

Dealing with that first, it at least suggests that he and Kim don’t part on horrendous terms. She could still be killed. Things could still go wrong. Anything could happen…but they don’t part ways as two people who never want to think about each other again. Saul, at the very least, can remember the good times.

And that’s nice to know! But I don’t think it’s everything.

I think the bigger, more important takeaway from that opening was that Jimmy McGill isn’t a man who cares about having a golden toilet.

Right now, by the time of “Hit and Run,” I think we’re in Saul territory, but not firmly. There’s still a little bit of Jimmy in the character. By the time of Breaking Bad, however, there isn’t. Or, at least, there’s not enough of it. Saul is a man who comes home to a golden toilet. Jimmy isn’t that man and wouldn’t ever really care to be. I think that that opening sequence was our reminder that there is still a long journey ahead of this character, even as we open the final season.

That’s significant, but also worrying. Part of my disappointment with the final season of Breaking Bad was that we started glossing over things. Walt was somewhere at the start of the season and needed to be somewhere else at the end. Well, sure, that’s how stories work. But without enough chapters to get him there at the same deliberate pace the show had usually maintained, we started skipping things. The show was fast-forwarding itself to the highlights.

Did that ruin the final season? Of course not. But the final few episodes had narrative requirements to fulfill that did not allow Breaking Bad to adhere to its own style of storytelling.

Breaking Bad and Better Call Saul take their time. They let you dwell on both consequences of previous actions and the encroachment of threats to come. We can flash ahead or flash back, but when we return to the present, we are still in the present. There’s no escape from what we have wrought, nor should there be. I think that the entire ethos of both shows is based on that. Skipping steps means skipping the time during which we live with the consequences of what we’ve done. Do that, and it’s not the same show anymore. It can still be good. In theory, it can be even better. (Breaking Bad wasn’t, but it’s possible.) It just won’t be the same.

With Saul still having so long a road to travel, and the show reminding us of how long that road is, I worry a bit that Better Call Saul will accelerate its pace rather than retain its identity.

We’ll see. “Hit and Run” does give us a clear reminder of how one character becomes another: He enjoys becoming other characters. Saul is, himself, a character who Jimmy plays. And Jimmy, however much is left of Jimmy, enjoys it. He enjoys planning, scheming, learning scripts, playing dress up. We’ve seen him do all of these things in this season already. It’s a thrill for him. Even when things go wrong, he gets to go home with a funny anecdote to make Kim laugh.

Jimmy’s environment is shrinking while Saul’s is expanding. One of them, necessarily, will die as the other flourishes. It’s no coincidence that “Hit and Run” sees his career on one side of the justice system gradually close off from him while a new career on the other side opens up massively. Jimmy enjoys playing a role and the universe is telling him, very clearly, to keep playing the role.

In fact, it’s telling him that he doesn’t have a choice, and we watch the many ways in which it tells him, over and over again, that he’s robbed himself of an entire possible future due to his own actions. He is forced to deal with the consequences of what he’s done. We watch him observe, absorb, and process those consequences. Then we watch him find another path for himself…one that leads to familiar territory for us, but which for him represents a world of possibility.

That’s much more effective (and better, and more interesting, and more satisfying) than skipping ahead three months and hearing Saul tell Kim that nobody likes him at the courthouse anymore.

Deliberate storytelling is part of what makes this show work, and it’s part of what made its predecessor work. Breaking Bad fumbled a bit in its endgame. Better Call Saul might not. I sure hope it doesn’t.