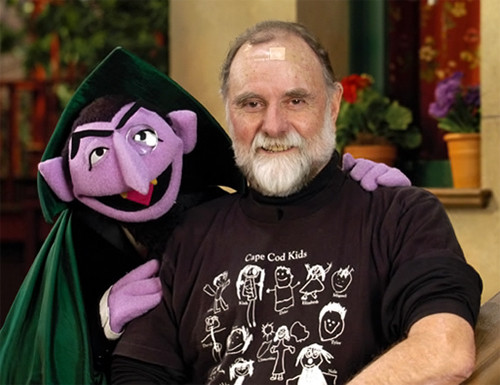 When I was a little boy, I loved Jim Henson.

He was probably the first person I knew as an artist behind the material he produced. Certainly I enjoyed other TV shows, and songs and films, but I always saw them in isolation. As products distinct from whatever anonymous forces breathed life into them.

Not so with Henson’s work. I don’t know why that is, but I knew his name. I knew what he looked like. I know not only that there was a human being out there bringing all of this wonderful stuff to life, but I knew who it was. He was the first artist I knew as an artist, and that’s either a cause or symptom of how important his work was to me.

He was also a less exciting first for me: his was the first death that hit me personally…and it hit me hard.

I guess I was fortunate that, by nine years old, I hadn’t had a family member die. Or a close friend. Or a beloved pet. But when Jim Henson died, it felt like I was losing all of those things at once.

I was devastated. If I choose to look back to that news, I find I’m still devastated.

Losing a friend is tragic because that friend isn’t there anymore. There is now a hole in your life where somebody you cared about used to be. It’s not easy, and shouldn’t be easy, to move forward from there. The world has changed, and one special person is no longer there.

When Henson died, though, the world didn’t just lose one special person; it lost an entire, powerful, selfless, incomparable creative force. A man who conjured up so much magic and wonder from nothing. A man who could make you laugh or cry with a piece of felt, and — what’s more — make you fall to your knees in sorrow when he’s no longer around to carry that felt.

Partway through The Crying of Lot 49, the protagonist takes out a notebook and writes to herself, “Shall I project a world?”

That’s a line I keep returning to in regards to Henson. From his lone, singular, gifted vantage point, he projected a world. In fact, he projected three worlds. Sesame Street. Fraggle Rock. The Muppet Theater. He seemed bottomless in his capacity for invention. He willed entire universes full of unique, rich and complex individuals to life. He treated them with love and respect by handing them off to great writers and even better performers. Henson’s vision was a serious one, even when it was silly. It was a life-affirming one, even when it was breaking your heart.

To this day I think it was Henson that inspired me to create. After all, what Henson did with cloth and plastic is what any artist should be doing all the time. Whether it’s words, or sounds, or colors, or anything else that brings you joy, an artist takes these small, insignificant things and assembles them into something life-changing. Henson and his team may have been constructing their characters from common materials, but when you look at Kermit the Frog you don’t see green felt and ping-pong ball eyes. You see Kermit the Frog. That’s because Henson was a success as an artist. He used small, insignificant things to build characters we not only believed in, but with whom we wanted to share our lives.

When I write, I try to do the same thing with words. If could ever be fortunate enough to create anything as rich or important as Kermit the Frog, I’d probably die of shock. Henson created characters that rich and important routinely. It really was some kind of magic, and it’s a magic that died with him, that the world lost, and that I lost at the age of nine.

By that point I was probably a bit too old for Sesame Street, and so I could have moved my affection over to reruns of The Muppet Show, or Fraggle Rock. But I found that I preferred Sesame Street in some way that I couldn’t understand then, even though I understand now: it was longer. Each episode was an hour compared to the half-hours of its sister programs. And that’s why I preferred it: it wasn’t that I wanted to watch these characters; I wanted to spend time with them.

I wanted to be part of that world of Henson’s. Be privy to that vision. Be able to touch, and feel, and interact.

I don’t know. Maybe my particular childhood cried out for escapism more than others. Whatever it was, the Muppets helped me through some really difficult times, be sheer virtue of their existence. They taught me that magic was real, only it was called creativity. And with it, you really could change the world.

Jerry Nelson’s death isn’t like Jim Henson’s or Richard Hunt’s, because Jerry Nelson lived a long and full life. He was faced with an impossible legacy to carry on…and yet he carried it on anyway. (That’s another kind of magic.) I’m not sad because an old man has laid down to rest, but simply that one of the last threads connecting me to my childhood, to my early sense of wonder, to three distinct and safe places I was always allowed to visit when I needed an escape, has disappeared.

Up to the very end Jerry was an enormously talented man. He may not have had a Kermit or a Fozzie or a Gonzo or a Scooter…but he had a Gobo. And a Robin. And a Count von Count. And a blue businessman destined always to be disappointed by Grover. He had characters that could fill out these worlds, and make them more real. Everybody who worked on those shows did me — and countless other children, and adults — a service for which they can sincerely never be repaid.

The fact that my sadness at the passing of Jerry Nelson leads me to think about the larger universes Henson created isn’t meant to be a slight at Jerry…but rather a loving acknowledgement of what larger, unforgettable, culture-defining things he helped bring to life.

There’s no shame in being remembered as part of a team. And there’s probably no team more impressive to have been a part of.

Thank you Jerry. Sincerely, thank you.