Let me take you on a journey through the past, to a magical time in our great planet’s history. I’ll set the scene for you:

A bleary-eyed world disconnects from Facebook for two and a half hours in order to watch a film about Facebook. An animated show called The Simpsons celebrates 20 years on the air, eight and a half of which were worth watching. A young Jessica Simpson releases an album of warbling Christmas standards in the hopes that it will generate enough money that she can do her own holiday shopping. And America comes, at last, to the tragic realization that their new president isn’t a Magic Negro after all…but is rather, disappointingly, just an extremely intelligent leader with his nation’s best interests at heart.

Yes, it’s 2010. And no I did not use a time machine to get us here…I simply inserted a dollar into Steam and downloaded World Basketball Manager 2010, the absolute best 2010 simulator I have ever played.

I haven’t played it yet…I’m about to play it for the first time which is kind of the whole point of this series…but I don’t think I’ve played any other ones so I think that’s a fair assessment no matter how it goes. (And as always, click the images for full-size. It’s funnier that way, I hope.) 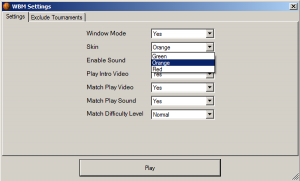 On booting up the game I am presented with an option to run it in windowed mode, which automatically makes it a better game than Vegas: Make it Snappy. I also have an option to choose my skin color. I’ll go with orange, so that nobody will be able to tell whether or not I’m holding the ball.

There’s also a tab called EXCLUDE TOURNAMENTS. When I click it I get a list of around 50 different countries with check-marks next to them. I guess I can deselect any of the nations against whose races I am so prejudiced that I can’t even bring myself to play a game of basketball with them. 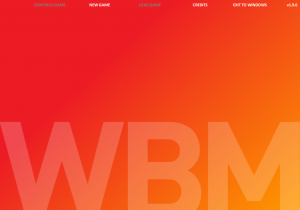 I told the game — explicitly told! — to play the intro movie, but I guess that was just a short, choppy animation for the Ice Hole developer logo, because I’m immediately dumped onto this title screen that leads me to believe the entire game was developed in Microsoft Paint.

I click NEW GAME and it asks me for a “game name.” It helpfully suggests the game name “New Game.”

I sure as heck can’t improve on perfection so New Game it is! 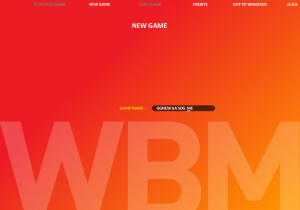 Except I can’t get the game to start. I press Enter and nothing happens.

I press other buttons and things do happen, yes, but the game starting isn’t one of them. I just mess up my extremely well-chosen game name with garbage characters.

I can click CREDITS and read about all the wonderful people who made this title screen, but I can’t play the game.

Doing something I never thought I’d have to do, I navigate to the game’s section on the Steam forums to see if anyone was discussing how to get the fucking thing started.

What I find instead: 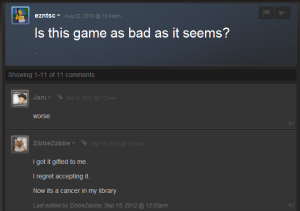 There are only two discussions, both of which are baffled by the awfulness of this game. This screengrab comes from the more active of the two threads. The other is titled, simply, “wat.”

I don’t know what to do. Everyone’s talking about how bad the game is, which I guess should make me at least somewhat happy that I can’t play it, but certainly they had to get further than the title screen in order to make that determination.

Maybe not. I’m stuck at the title screen and I’ve sure as cock made that determination. 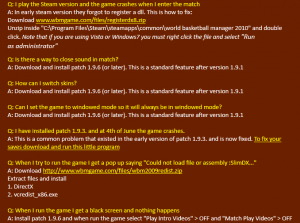 I find the website for the game, in the hopes that there will be some instruction on how to START PLAYING THE THING. Nothing, but their FAQ is crawling with concerns about game-crashing issues and the answers to simple questions (such as how to activate and deactivate basic features) tend to be “install this patch to keep your computer from catching fire when you try to run this horse shit.” Promising.

BUT I STILL CAN’T PLAY IT.

I finally look for some footage of the thing on YouTube to see if anyone has actually successfully started the game. Sure enough when the guy in the video — whose disgust for this game is already palpable — types in the name of his game, a little CREATE button appears in the lower right.

What’s that? You don’t see that in the screen grab above?

It was under the Windows task bar.

Of course it’s not their fault…how were they to know that literally everybody ever has their task bar locked to the bottom of their screen?

Everybody but me that is, because I now had to move mine to the right in order to make room for World Basketball Manager 2010. I expect that’s something you won’t hear many other people say today. 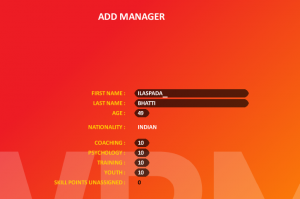 The game has helpfully auto-completed the appropriate fields with my personal information. Or its best guess, which is that I’m a middle-aged Indian man who coaches exactly as well as he psychologizes. He also somehow has a perfect 10 in youth, despite the fact that he’s five years away from being eligible for residency in a retirement home.

I name myself Philip Reed, 32, U.S.A. Don’t ask me where I got all that…it just sort of came to me. I leave all of my stats at 10 because that’s the maximum and why the hell wouldn’t I?

Even with the task bar moved I can’t see where I need to click, but if I move my cursor just off the bottom of the screen I can click whatever it is anyway.

Did I mention you can’t resize the window? This is truly stellar stuff, Ice Hole. 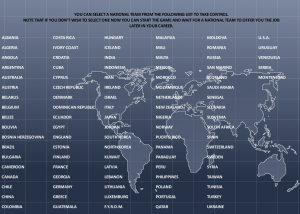 This grammatically-troublesome invitation is also the least inviting thing imaginable to me right now. Pairing it with a geography test isn’t helping to get me in the mood for fun. I don’t know where half these places are. (Okay, more like a quarter, but go along with it please.) Even less do I know / care about their historical basketball skills. 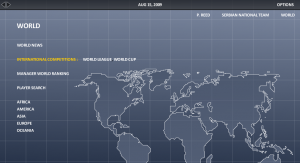 I don’t know what to do. 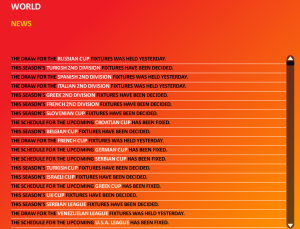 I click blindly through some menus with the vague hopelessness that precedes any upcoming basketball game, I guess, and try to pick a fight — that’s what they call it in sports, right? — with Canada.

I don’t get this.

What does this mean.

What does any of this mean.

Are these basketball words?

I honestly don’t know how to start a game. I click through to my own team info and I see that I’ve already won some Olympic medals. 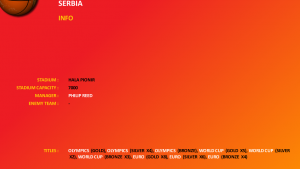 While I was reading the evening headlines and mindlessly poring over Canada’s dayplanner, my team went out and won a shitload of medals and awards!

I’m tempted to just end this “playthrough” here (though it’s more of a read-through I guess…my earlier presumption that this game was developed in Paint has yet to be shaken) with the joke that I WON THE OLYMPICS GAME OVER but, in the course of blindly clicking around (which passes for strategy in World Basketball Manager 2010) I clicked on the date and found that you can advance to the next match day.

So I will do that, obviously, and give the game an actual chance. Let’s just advance to the next match day and… 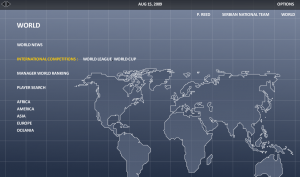 How did I go four days back in time? What the hell is World Basketball Manager 2010 trying to pull? It’s bringing me even further away from 2010!

Why on Earth did the game wind back the clock? I just wanted to jump to, I dunno, A DAY ON WHICH I COULD FUCKING DO SOMETHING but instead it brought me backward.

To a day on which basketball is still not happening.

Let me just take a look around here to confirm…hmm…yep…no basketball. No basketball. Just me standing in front of the map from Dr. Strangelove‘s war room, waiting for something, anything, to happen.

Look, I know this is a management game. I don’t expect to be slam dunking and free throwing and ball dribbling and penalty stroking and whatever the hell else athletes do. But doesn’t managing a team entail more than sitting around with a world atlas open in your lap, waiting for your team to win some things so you can read about them?

I can click through to different countries but all it lets me do is look to see what games they’re playing while I sit around, doing nothing, waiting to be invited to a game.

Look. It’s insulting. Everyone else in the world — literally! — is having so much fun, but all I get to do is sit around fantasizing about what it must be like to ACTUALLY DO THE JOB I DOWNLOADED THIS GAME TO DO.

I can click on the names of the teams, including the Baston Ciltics a-fuckin-har-har, but that still doesn’t let me challenge them. It just lets me check out their roster and peek into their bank accounts for some reason. I guess that would be really helpful in Identity Theft King 2010 but for now it’s just a further reminder that somebody out there is getting paid to do the thing I thought I’d also be doing. Why am I just clicking on meaningless words over and over, like I’m being forced to navigate some middle-schooler’s hypertext poetry project?

I give up on this thing. If you want to play World Ass-Sitter Nobody “2010” then be my guest. Maybe you’ll even get it to work.

But for both of our sakes, I hope you don’t.

And with that, I’m putting my task bar back at the bottom of my screen. Where God intended it to be, Ice Hole.

World Basketball Manager 2010
Released: April 21, 2010
Price on Steam: $0.99
Regular Price on Steam: $4.99
Price It Should Be on Steam: You should have your credit cards taken away if you attempt to buy this game through Steam.