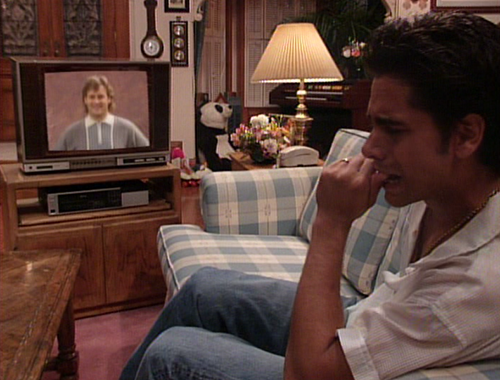 So lest anyone fears this is turning into a Breaking Bad fan blog…I’ll write about another show.

LOL JK. But I’ll write about someone else who is writing about another show: the guy over at Full House Reviewed.

Go check it out. Because it’s incredibly funny.

I used to love Full House when I was a kid. Looking back I have no idea why…even then there was far better stuff on television. But, whatever, I liked it. I thought Jesse was cool, I thought Joey was funny, and I even thought Kimmie Gibbler was attractive. (Was I really the only one??) I guess I was all kindsa fucked up as a kid.

But rewatching this show now? Jesus.

Some shows and films and songs age a bit poorly, and you might feel a bit silly for having enjoyed them unironically at some point, but man oh man was Full House just total and utter garbage. A lot of these ongoing review blogs end up reaching for jokes to make and downplaying something’s effectiveness, because they kind of have to. The stopped clock ends up being right at a certain time of day but the blog must go on.

Not so here; Full House never gets anything right. It’s an absolute perfect target, and I end up feeling ludicrously proud when he points out some of the same issues I’ve had when I happen to catch a re-run as an adult. (And seriously…why is that show re-run at all?)

I’m working pretty hard on Detective Fiction right now, and I couldn’t be happier to report that. For those of you who don’t stalk me, that’s my novel, and it’s around three or four years in the writing now. I’ve got a good draft complete…and now I’m at the point in the process that sees me getting it into some kind of shape that I wouldn’t be ashamed to send to an agent or a publisher.

But I’m excited. I’m very happy with how it came out…so while it still needs a lot of work, I can’t wait to get it out there and see how folks react to it. That’s going to be the really fun part.

I’ll talk more about it some other time, for sure, but I have a little story about Full House.

I stopped watching it in fifth grade or so…whatever year that would have been for me. And in sixth grade, my friend Lucas Monaco (which is a name I wish I invented) mentioned some new episode over the weekend or something. I said, “You still watch Full House?”

I was a huge bully back then, as I am today. I always beat people up and make fun of them for the things they enjoy, and then I give them a purple nurple. So he was terrified!

…no. It wasn’t meant to be confrontational at all. I was just surprised. But he sort of hesitated and said, “Yeah. But it’s not as good now that Jesse owns the Smash Club.”

I don’t know what happened to Lucas Monaco.