On the ninth day of Christmas Philip (that’s, uh…me…) gives to us… 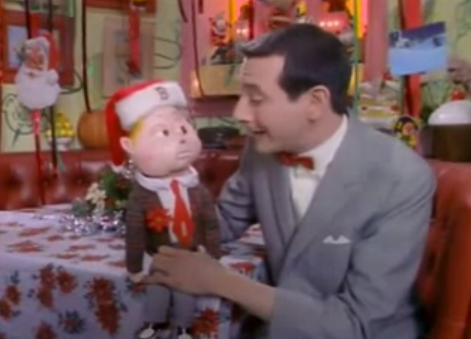 When I was little, I loved Pee-wee Herman. And looking back, I’m pleased that I don’t have to wonder why.

The show was, and is, a sheer delight. As Pee-wee, Paul Reubens taps into everything great about being a kid. The limitless wonder of daily life, the magic inherent in the world around us, and the sheer addictiveness of simple imagination. The concept that Pee-wee wasn’t a kid, but was an adult, was revolutionary to me; this was a grownup who understood.

It wasn’t dad, or a teacher, or an uncle. They had jobs and responsibilities and things to do…and so no matter how much you might love them, they didn’t understand. There was always going to be a barricade, an age-defined breaking point between youth and adulthood. Pee-wee Herman didn’t bridge that gap so much as he simply existed in isolation. He was a glorious, addictively cheerful exception to reality. He epitomized something we, as children, always wanted to believe, but hadn’t really been able to: the fact that you didn’t have to grow up.

Every Saturday morning I would get out of bed and watch Pee-wee’s Playhouse. It was an escape for me in very much the same way as the Muppets…from a sad and frustrated childhood I could find myself, through the magic of a television screen, transported into another world. A world where things weren’t scary, weren’t upsetting, and weren’t dangerous. A world where people were laughing, and having fun. A world dictated and shaped entirely by the bounds of our own creativity. I wanted that, and I feel as though I’ve spent, in some way, the rest of my life trying to recapture it…that elusive vision from the past, long faded and gone.

I was fortunate growing up to have two great shows — this one, and Muppet Babies — that both preached and demonstrated the value of imagination. I’m not sure how much of that exists anymore, but every Saturday morning I could count on being reminded of how important creativity really was, and I don’t think it’s an overstatement to say that this shaped me, in enormous part, into the individual I am today.

Pee-wee’s Playhouse apparently had only 45 episodes. I almost can’t believe it…I must have seen each one a dozen times, because it feels like I spent a lifetime in the Playhouse. I still remember all the puppets by name. I remember Jambi’s incantation. I remember what to do whenever somebody says the secret word.

I remember vividly one morning when I must have been about eight. My friend had spent the night, and he was a Pee-wee fan too. We woke up and turned on the television and sat on the floor waiting for the show to come on. My bedroom door opened, and it was my mother, asking what we were doing awake at five in the morning. We hadn’t realized it was so early. We hadn’t even thought to look at a clock. We just woke up and immediately turned the television on, so that we wouldn’t miss Pee-wee. 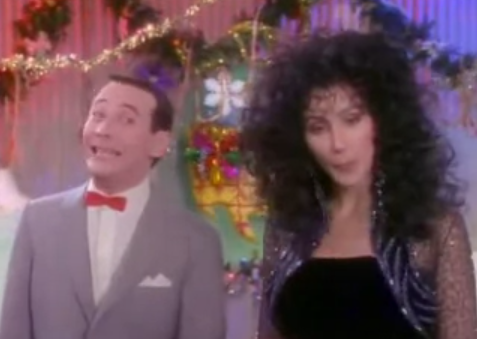 “Pee-wee’s Christmas Special” doesn’t stand out to me at all. Perhaps that’s because every episode was like Christmas to me. It was all a gift beyond value…a missive from an imaginary world that offered invaluable escape. It really was the best gift of all, and I got to re-experience it weekly. I’d tune in to Pee-wee’s Playhouse and that was all I needed. They say that Christmas comes only once per year, but for me it came weekly.

Looking back on the show now I’m amazed by how quaint it feels. Pee-wee was a throwback I’d never, as a child, have recognized as a throwback. His rebelliousness was that of a 1950s school child. He was bratty, but wore a bowtie and a smartly pressed suit. His hair was immaculate and his smile bright. He was both significantly older than me, and was also my peer. He was someone you could look up to, and yet conspire with. And while I’d have never recognized the Playhouse as an absurd subversion of the tropes of children’s programming, I loved it for what it was. Pee-wee’s mocking was gentle. Adults could laugh at the inane undercutting of the shows they grew up with, and children could be proud to grow up with this one. Pee-wee didn’t exclude.

In “Pee-wee’s Christmas Special,” there’s a deliberate desire to overwhelm. Pee-wee is so overbooked with celebrities that he needs to turn Whoopi Goldberg away, and he hosts a conference call with Oprah Winfrey and Dinah Shore just to get them both out of the way at once. Magic Johnson is crammed into Magic Screen (they’re cousins) to help Pee-wee “connect the Christmas dots,” and when Grace Jones is delivered accidentally to the Playhouse (she was supposed to go to the White House) Pee-wee quickly orders her back in the box.

It’s overstuffed by design, so that even the opening list of celebrity cameos becomes a joke. With Pee-wee’s Playhouse, the simple act of putting a television show together offers a wealth of opportunities for comedy. The main joke is that the show itself exists, and literally everything else is just a continuous heightening of comic fulfillment.

As a kid I’m sure I didn’t care that Cher was on hand to help reveal the secret word, or that Frankie Avalon and Annette Funicello became Pee-wee’s indentured Christmas servants…I was just glad to have Pee-wee holding the show together. 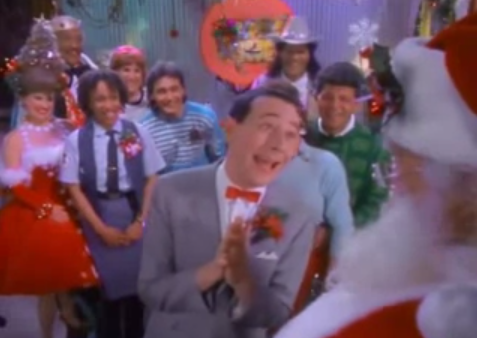 Of course, in the end, we did have to grow up. The promise of Pee-wee was lost, forever, in 1991. That, I say without any trace of irony, was the moment my generation lost its innocence.

There was no more. The dream was over.

I don’t begrudge Reubens his choices. I don’t think he’s a bad person. He committed the crime of pleasuring himself in an adult theater — a crime I have a hard time of seeing in any way as criminal — and, all at once, it was over. I carry the scar of that forcibly lost world today, but it’s not a scar inflicted by Reubens…it’s a scar inflicted by the witch hunters that barred him from television and decimated his career. It’s a scar inflicted by the very watchdog groups that claim to be helping children, and keeping them safe. I think it’s a similar thing that children today are experiencing with Kevin Clash. Congratulations, kids. You’re all grown up.

The world is a cruel and dangerous place. That’s the unintentional lesson Pee-wee’s Playhouse taught children my age. Imagination can keep it at bay for only so long. Whatever time you spend at the top only pulls you closer to your fall back to the bottom.

I miss being a kid. I miss the things I’ll never see through that youthful filter again — Christmas certainly among them. I miss the world and how it looked before the curtain fell away and I saw the ugly, grinding mess of gears that kept everything operational.

I never wanted to grow up. Nobody did. But everybody had to. Pee-wee and Santa Claus appear together in this special, making the world a happier place for children everywhere, but their days were numbered. Children were getting older. Reality was intruding. Dreams were fading and promises were being broken. We’d have to grow up after all, and, what’s more, we had to do it quickly. There’s no time to get your coat, and there’s no sense looking back. We all fled together.

And the fact that we weren’t alone failed to make it any easier.

Tomorrow: The healing power of music.