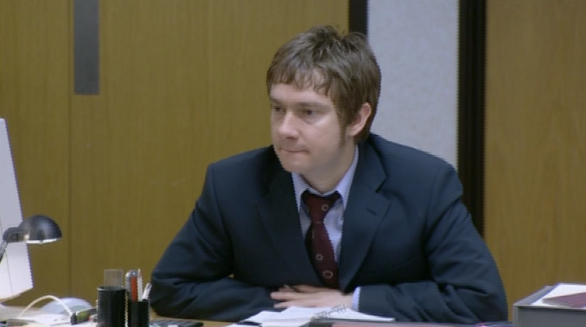 I haven’t written a Valentine’s Day post (that statement will obviously be false by the time you read this), simply because I forgot to. Maybe I could have had some fun with it, but it’s now or never so I thought I’d make a little list of what I thought were some of the most romantic moments in films and television shows that I love.

But, as always, I kept getting hung up on one of them…my absolute favorite of them: Tim taking off his microphone.

I love The Office. I can’t say that enough. (But I can say it exactly as often as I hasten to add “the UK version” to that statement.) And this moment, this one moment of a minute or two throughout the whole of its 12 standard episodes and two longform Christmas specials, is exactly why I love it. It’s everything about the show that resonated with me, and it’s everything I’ve always wanted television to be.

Yet it’d probably be my pick for the single most romantic moment of anything I’ve ever seen. Why is that?

Well, romance takes many forms. There’s the standard falling in love, yes, but there’s more than that. There’s Edward G. Robinson lighting Fred MacMurray’s cigarette at the end of Double Indemnity. There’s Shaun and Ed playing video games after a near-apocalypse in Shaun of the Dead. There’s Scoutmaster Ward reaching out to compliment a distraught young Sam on his campsite in Moonrise Kingdom. There’s — as Thomas Pynchon observes in Vineland — the persistent romance of Sylvester and Tweety. And there’s Kermit and Miss Piggy fighting over whose acting is worse and realizing, somehow, as their tempers flare most violently that, at heart, they will always love each other.

Romance is not singular, and it wears a new face in every situation. And in this case, it’s the darkly necessary heartache of Tim taking off his microphone.

Tim’s is a life of regular disappointment (at least if we are to take the documentary crew’s editing choices as faithful to reality, but that’s a subject for a whooole other post). He doesn’t like his job, lives with his parents, wants to go back to school but can’t bring himself to do it, and, above all, yearns for a woman he can’t have: Dawn, the receptionist.

But with Dawn leaving for America with her fiance, he takes action. For the first time that we’ve seen him, Tim attempts to take command of his own life.

He loses track of his own thoughts. He begins to question his own explanation, and it unravels entirely, to the point that he stands up, excuses himself, and walks out of the room.

Tim’s stumbling makes it real. His words fail him, and when they do, it’s as though a spell has been broken. Tim realizes that he doesn’t have to be sequestered in a little room in an office he hates while the woman he loves drifts away forever. So he stands up. He takes control. And the camera crew follows him down a corridor we’ve never seen before. He’s broken down the barricade, and walked us into a new and more honest world. It’s a jarring moment…because it has to be.

And it gets even more jarring when Tim commits a cardinal sin of broadcasting: he takes of his microphone.

I can’t repeat that short description enough. Tim takes off his microphone.

The implications of that moment are profound. He is controlling his own destiny at this point. The documentary crew, as long as we’ve known the characters here, have been giving The Office shape but now Tim’s done something that no amount of editing could change. He’s made everything go silent.

And he stands with Dawn in the meeting room, behind closed doors. And the camera struggles to see them through the blinds. Focus is lost. Lips can’t be read, but he’s saying something to her. And she hugs him. And they separate. And she says something to him, too.

He leaves us with six words, and I break into tears every time: “She said no, by the way.”

And that is romance. Romance makes us do stupid things. It makes us behave in ways we normally wouldn’t because if we didn’t then how could we ever change? How can we ever move forward if we don’t let ourselves try to break out of the same circle now and again?

It won’t change anything, most of the time. And it can’t. Because life is circular. But, at some point, if you don’t make an effort to shift your orbit even slightly, then you have to wonder what you are doing.

And Tim made an effort to shift his orbit. Internally — though we can clearly see it in his eyes — he’s made a decision. He has to throw his weight, every ounce of it, into this. He has to try. He can’t let her go because if she goes then what will he have? If she goes, with as much as she means to him, and he lets it happen, then what hope could he have for anything? He has to do this.

And he fails. She said no, by the way.

And it’s all on camera. And it’s preserved in amber, for future generations to watch and wince through. And Tim knows that. He’s made himself into a fool. And that’s there forever.

But that’s romance. Because if he hadn’t tried, he wouldn’t have had anything. He did try, and he still has nothing. So what does that say? I don’t know, but I do know that that’s what made The Office The Office.

Tim couldn’t, but that doesn’t make his gesture any less romantic. If anything, it gets more romantic for being doomed. After all, it doesn’t take love to move forward together…it takes love to stand up alone and make your declarations in the face of looming dissolution. It takes love to go down with a ship. It takes love to lay your feelings out in public so that they can be shattered on camera. After all, if it’s not love, then what is it?

Of course, things do work out for Tim and Dawn…at least in the sense that they get another chance in the Christmas specials. But Tim doesn’t know that now. And knowing that, however many times I watch it, doesn’t detract from that sense of devastated finality. Tim made the effort to stand up for himself, and the universe shoved him right back down in his chair.

She said no, by the way.

But we had a second chance, too. And Tim’s grand gesture meant only that he was reminded of his place in the universe. That’s what I was reminded of, too.

But in both cases, something happened. A chance, a coincidence, and we got another shot.

Maybe throwing your weight against your orbit doesn’t seem to work. Maybe it even hurts. But when enough time has passed, you might find that your trajectory was changed after all. It might have taken years. It did for Tim. It did for me. But eventually you might realize that you have changed something. Some memory or dream that never quite went away when everything else did, some shadow of the future that took its time meeting up with reality. You never know the changes you’ve made in your own life…you never know, because there’s never an ending. You never “arrive” anywhere…another great theme that The Office handled so well…you just are.

And life goes on. And that can be a bad thing, or that can be the greatest, most reassuring thing imaginable.

Tim was shattered. So was I, and so were you…whoever you are. But life carries on. And what feels like an ending only feels like an ending. Because ultimately, it’s up to you to make that foolish decision. To walk into the burning house to save the one you love most. To step into the cockpit of a crashing plane because that’d be the only chance you have. To be, even on your own terms and within your own life, a hero.

That’s romance. That’s love. And it’s more painful than words have ever been able to express, which is why The Office expressed it in complete, literal silence.

But things can work out. You may always have farther to fall, but ultimately that only means that you’ve got that much more space above you that you can climb. Nobody said it would be easy. If it were easy, it wouldn’t be love.

I love you babe. Thank you for everything. I couldn’t be happier that we were able to circle back around. It’s what made this real, and I’m more grateful for that than I can even express.

8 thoughts on “In Which Tim Takes off His Microphone”