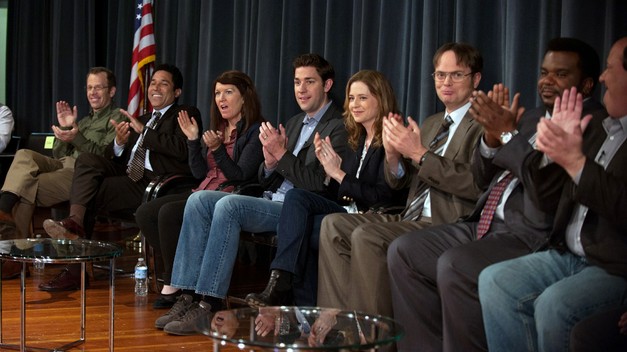 Well, I didn’t expect to catch the final episode of The Office, but I did. I was looking for something to watch, saw a retrospective documentary on the show followed by a new episode, and remembered — oh yeah… — this show is ending now.

So I tuned in, and the format of the episode kind of suited the fact that I hadn’t been watching for a while. I saw a few episodes of season 9 (up to the point where one of the new guys tries to date rape Erin and nobody has a problem with that) and then tuned out. But “Finale” is structured to check in on these characters after an artificial absence. We’re catching up with everyone, even as we’re saying goodbye. The fact that there really was an absence for me might have worked in its favor, or maybe it didn’t. But it should have. It also probably should have been a little better than it was.

The episode’s central conceit is that the documentary crew has finished filming and the series has aired. Now, for whatever reason, they’re filming extra footage for the DVDs…ignore, I guess, the fact that they’ve been filming these people for nine solid years and should already have plenty of “extra footage,” but this show lost touch with any semblance of reality ages ago.

And that’s kind of the problem. At some point you either throw up your hands and say, “Okay, this show is a cartoon with an impenetrable logic of its own that shifts not only from episode to episode but often from scene to scene, and I’m fine with that,” or you stop watching completely. (I did the second thing.) “Finale” only really works, though, if you see these characters as real people that are worth caring about. The episode tries its damnedest to make that stick, but ultimately the damage has been done. These aren’t real people, or anything like real people, and no amount of end-game pathos will retroactively redeem the mess.

That’s not to say it’s bad…it’s not. As an episode of television, it’s fine. As a permanent sendoff to a particular series, it’s better than The Office deserves. But it’s still a bit of a muddle, and one that tries to punctuate a story other than the one we’ve actually been told.

Maybe it’s the fact that I’ve been tuned out for almost a full season, but I really didn’t care at all about Dwight and Angela getting married. Compared to Jim and Pam, or even Phyllis and Bob, this didn’t register as a wedding. It was just a bunch of characters together. You don’t need to have real emotion at the core of every scene in a sitcom, but you need something, and if it’s not going to be particularly funny it might as well be charming, or touching, or dramatic. This was just…there. They’re married now. And since the episode split nearly all of its time between the wedding and the “cast reunion” or however I’m supposed to refer to that, one of those things really should have gone somewhere, or had some sort of narrative arc.

I did like a few things in the episode, though. For starters, maybe it’s just me, but seeing Dwight firing people as the new boss really suggested that he might be the best man for the job after all. How many offices do you know of in real life that had almost zero employee turnover for nine years?

So seeing Kevin and Toby fired, Stanley retiring, Nellie moving, Andy and Darrell following their dreams, Creed on the run from the cops, and ultimately Jim and Pam leaving as well…that made sense. But all it does is remind us that this sort of thing never happened before, which is a problem, and is probably how The Office settled so easily into stagnation in the first place. We need shakeups like this, and they can’t always come in the final episode. The half-hearted non-explanation that Toby always blocked people getting fired in the past only raised further questions. (Such as…uh…why?)

As you can see, though, I can’t even praise the things I liked about the episode without it dredging up even more I didn’t like. And that’s what The Office has always been to me: great ideas and flashes of brilliance that fizzle far too easily. Great moments are undermined by reaching for lousy gags, emotional episodes are followed by everybody in the office having a dance party for no reason, and characters that finally begin to demonstrate some growth have their personalities rewired entirely the next time we see them. It’s disarming, and it’s impossible to form a bond.

Yes, I was moved by Andy’s closing thoughts about how he used to spent all of his time missing Cornell and now he spends all of his time missing Dunder-Mifflin, and how he wished it was possible to know when you were in the good old days, but which Andy is this? The career kiss-ass? The boiler waiting to blow? The hopeless romantic? The neutered nincompoop? The conniving villain? The spineless salesman? The words have meaning of their own, but they’re emanating from an empty shell that could have — and should have — been a rich and complicated character.

I don’t know. It had its touching moments, but that’s because it’s touching by default when two people who are in love do something nice for each other, or historical antagonists let down their guard to be friendly for a change, or people look back and realize they let good things slip away. That’s not down to the writing or the acting…that’s just human nature, and not much of a compliment for the episode itself.

So much of it, even for a presumably carefully-constructed capper, just feels tossed together. I’m not sure why Ryan and Kelly had to come back if all they could think to do with the characters is pair them off and have them be miserable again. I’m also not sure why they were at the wedding of two people who were never fond of them to begin with. Nor do I know why the writers would have put them there instead of the cast panel, where they would have had a logical reason to be.

And I don’t know why the two new guys were at the panel, when people who would have been watching the show would have had a lot more questions to ask someone like Todd Packer, or Karen, or even pointless Gabe who would have had more history with the production and its larger moments.

But, above all, I’m not sure why we didn’t get to hear much from Michael Scott. Yes, he was there. Yes, it was very nice that he was Dwight’s surprise best man. However I want to know what he thinks of the documentary that aired. I’m not sure why that was skirted entirely. Presumably he’s changed a lot and is no longer like the man he once was. That’s great. But for seven years he was documented being an obnoxious, domineering, broken asshole; now that’s aired…and he has nothing to say about it? Personally I’d have been happy with him saying, “I chose not to watch” and leaving it at that. I don’t need a monologue of embarrassment, I just want to know his reaction because that would help to shape him as a character.

Of course, nobody’s been a character here for a very long time. They’re costumes and zingers, so of course they can’t tell us what they think; the writers don’t even know.

Ah well. It had Dwight treating a stripper like a waitress, and I enjoyed Meredith for the first and last time when Li’l Jakey shows up to the bachelorette party. There was also a succession of progressively better moments with Creed, who has been a lone highlight of episodes for a long, long time.

His final song, a stretch of musical gentleness, suggested a much better episode than what actually preceded it. And his little reminiscence of being hired and choosing his desk, just before being led off in cuffs, was great too.

Goodbyes are messy. I know that. Maybe that’s the one thing that did make the episode real. But since these people haven’t been people for so long, I find the sendoff to be more a wistful love letter to what should have been, rather than a fitting cap to anything that actually was.

2 thoughts on “Review: “Finale,” The Office”