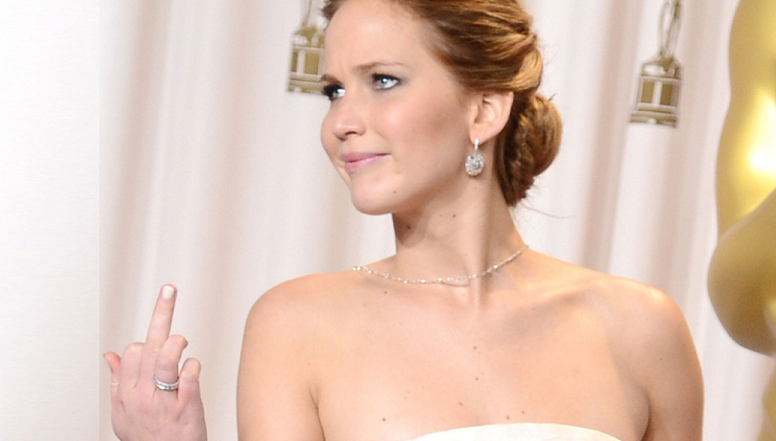 …but you’re not one of them.

It’s easy to see why. She’s at the height of fame. She’s popular with both critics and audiences. And she is — this is a fact; there is no room for argument — an incredibly beautiful woman.

Wait…did I forget to mention that she’s naked in the photos?

Because she is. Sorry, that was probably important to bring up.

Oh, and…actually, did I refer to the photos as leaked?

Ugh, sorry. I’m not paying attention at all today. I meant to say “stolen.” And that’s absolutely crucial to bring up.

I like Jennifer Lawrence. I’ve never seen The Hunger Games or, well, most of the stuff she’s been in. If I hear that she’s going to star in a film, that doesn’t make me much more likely to see it. And, really, if she retired from acting tomorrow, I can’t imagine my particular future as a movie-goer would be impacted at all.

She’s a charming human being. She has a natural wit and warmth. She’s intelligent and, by all accounts, friendly to a fault.

It’s rare that I’ll catch an interview with an artist (of any kind) that I don’t already follow and find myself won over. And yet, I hear her speak…I listen to her engage with her interviewers and fans…I see an honesty in a smile that has every right to be forced…and I think, “I respect you.”

She’s also beautiful. I’m positive that if we met in real life and she fell in love with me, I’d have no qualms about engaging in a sexual relationship with her.

This is also why it’s important to distinguish between “leaked” and “stolen.” A “leak” implies that somebody involved — deliberately or not — released into the public something that wasn’t scheduled to be released. Sometimes it will be an early cut of a film, a draft of a script, a record album that won’t be in stores for another month. In other words, things that eventually we would see, in some form, at some point, anyway. Other times it will be somebody’s private letters. A sex tape released by a jilted — or money-hungry — lover. A surreptitious recording of a politician quantifying the precise number of people in the country he doesn’t actually give a shit about.

Leaks can be noble, leaks can be selfish, leaks can be problematic. But, strictly speaking, a “leak” needs to occur somewhere along the chain of custody. Somebody involved takes a look at what they’ve been handed and says, for better or worse, “I’m supposed to do A with this, but I’m going to do B.”

Theft is different. Theft is overtly taking what you are full-well aware does not belong to you. And that’s what happened with these photos.

The distinction, I think, is important. Had Jennifer Lawrence taken nude photographs for a boyfriend who later, embittered, released them, that would be a leak. It would not make their circulation much less troublesome, but there’d be an element of accountability there. Charges could be pressed, for instance. Jennifer Lawrence could step back and think twice about the kinds of guys she trusts with these sorts of things. While the end result might seem the same to passive observers like me and you, there is still a degree of corrective action that can be taken. A chance to reflect upon the decisions made that caused something like this to happen.

Instead, somebody just took them. I don’t know the specifics, and I wouldn’t understand even if you laid them out for me, but, essentially, these photos were retrieved from data accessible through the cloud. Not directly, and not openly. Somebody sought these out, identified the things they would need to do, break, and exploit in order to get them, did those things, got them, and distributed them.

No breach of trust, no apology, no lesson to be learned. Unless, of course, you count the lesson that the world is full of assholes.

We can fingerpoint. We can say that she shouldn’t have stored those photos in the cloud to begin with. But…did she? It’s possible, but I doubt she deliberately stashed them there. More likely, something synched in some way she didn’t expect. The hacker who stole them, however, played his part in this game will the full knowledge of what he was doing. There is very clearly somebody at fault here. And it’s a thief.

To circulate, to save, or even to seek out these photos is an act of cruelty, and it’s one that dehumanizes an innocent woman.

You have every right to decide who does and does not see you naked.

Think about that. Imagine, now, a world in which that was not the case. That somebody, with enough work, could retrieve photos, videos, transcripts, phone conversations, love letters…or anything, really…that you shared with somebody. With one specific somebody. Somebody you trusted and cared about enough to share them. And that once those things were retrieved, that’s it. It’s over. From that point forward, you no longer have any control over who could see you naked. (In any sense of that word.)

And that’s pig-headed. Disgusting. And a pretty easy way to perpetuate the horrific rape culture we’ve so successfully built up around us. Sure, a woman might say she doesn’t want us doing this…but, really, how’s she going to stop us?

The disconnect here — preventing us from seeing this for what it really is — seems to be facilitated by the fact that she’s famous, as though that’s actually the key factor here. But it’s not; the key factor is that she is a human being who is now being exploited.

I haven’t seen the photos. I don’t want to see them, because that’s unfair. Jennifer Lawrence is one of many thousands of women I’m sure I’d enjoy seeing naked. But if they don’t actually want me seeing them naked, then that’s their choice, and I’m compelled to respect that.

I’ve never met her, and likely never will, but that doesn’t mean I shouldn’t — or can’t — respect her as a human being. Think of all the people you don’t know that, in the blink of an eye, could suddenly cease to respect you as a human being. What a cold and frightening new day you’d find yourself in. Could you willingly do that to somebody else?

Jennifer Lawrence managed to be wholesome. Maybe not personally (I wouldn’t know) but in terms of her image. That’s what I liked about her in those interviews; the sense that she was a person. Not a body. Not cleavage. Not veiled entendres and teases. Her body was not her language. She was a young, attractive woman in Hollywood who managed, against all odds, to build and maintain a career based on something other than sexuality.

That’s valuable to me. The moment a beautiful young woman enters the public eye is the moment that the clocks start ticking down until we successfully drive her to abandon all self-respect for the sake of our entertainment…at which point we chide her for being a slut, and move on to the next one.

If you want to see a woman like Jennifer Lawrence naked, work on making yourself worth her time. She dates. She flirts. She fucks. She’s a human being.

The least you can do is treat her like one.