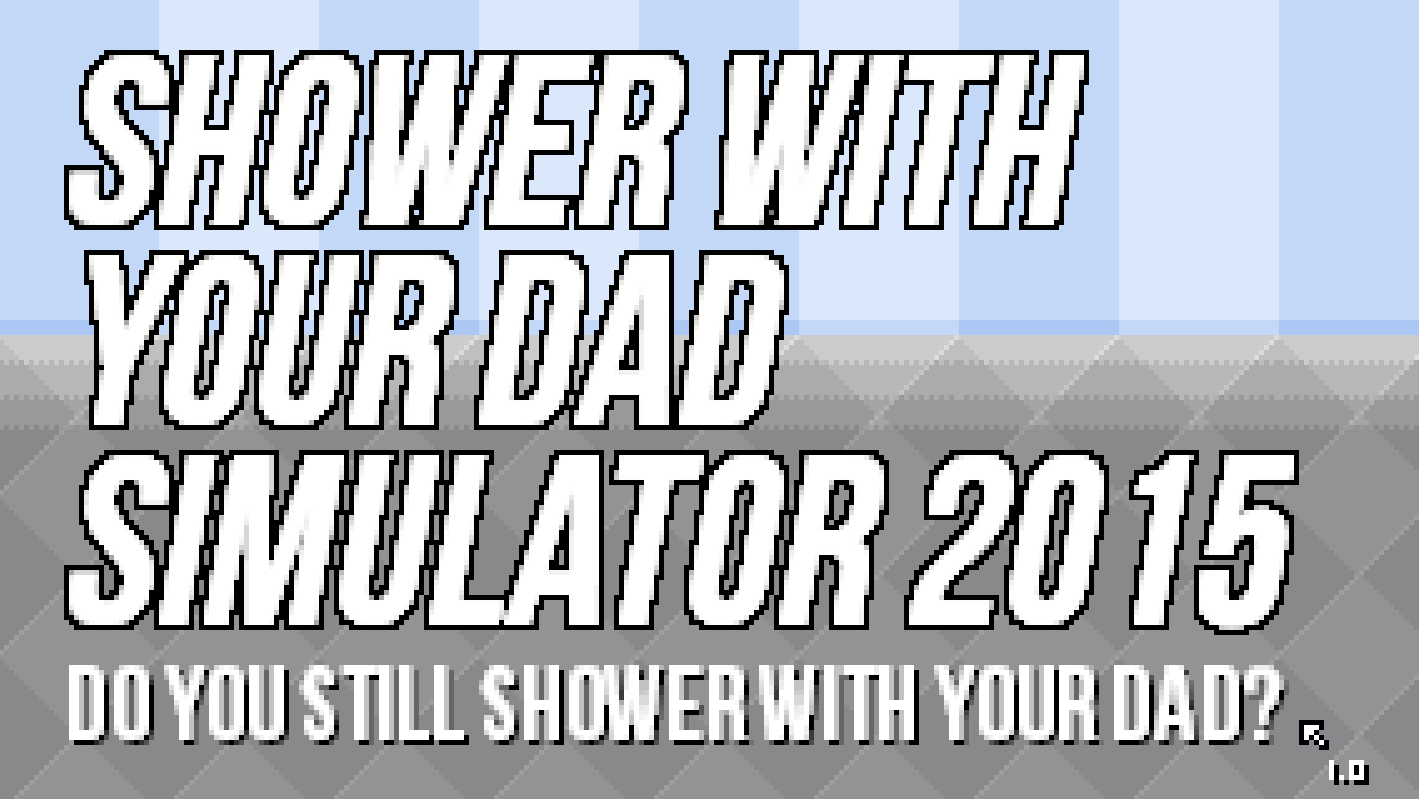 Hey, remember this series? It just goes to show that nothing ever dies here at Noiseless Chatter. I just stop writing and you stop visiting.

Anyway, an old coworker got in touch and told me that Shower With Your Dad Simulator 2015 was only 99 cents on Steam, and I should review it on my blog. So here I am!

See? You whiners complain about lack of content…but all you actually need to do is text me a polite request to cover something, and I will. It’s that simple, and you have no excuse for not doing it. (I’m not giving you my phone number.)

This one is…well, it has a title, and that title is Shower With Your Dad Simulator 2015, so that might as well be my review right there.

It’s obviously meant in a jokey sort of way (I hope); a riff on the influx of “Simulator” games that I guess are really common.

At least, I keep hearing that they’re really common, but I have to confess that for every actual simulator game I know of there seems to be four or five jokey ones making fun of the concept, so maybe people are just starved for ways to be funny.

I don’t know anything about this game beyond the thrilling promise of its title, so, like all $1 Adventures, I’ll be recording my reactions here as I go. That’s sort of the point of this series, but since even I forgot these stupid articles existed I can’t really hold it against you if you didn’t remember.

Unlike the other $1 Adventures, though, this one actually has a content warning. 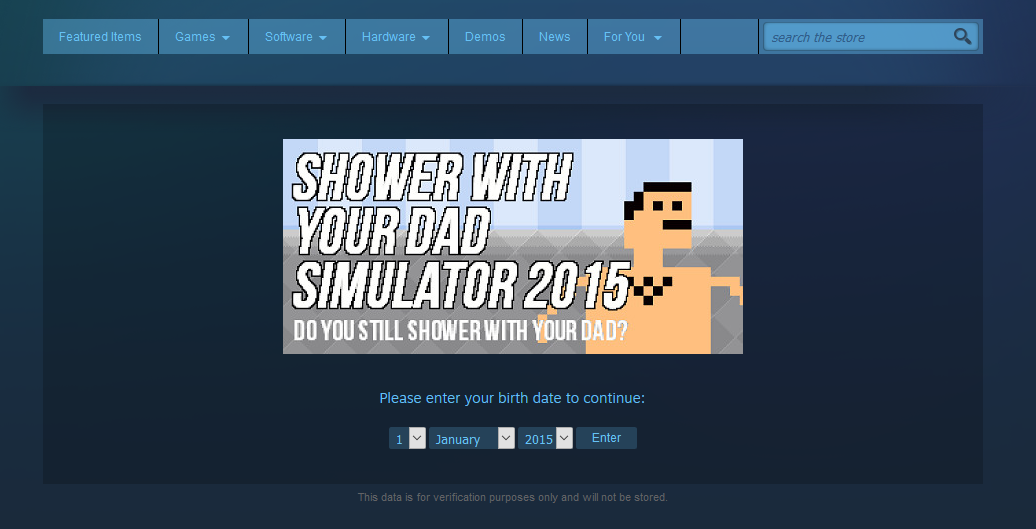 OH GOOD. Age restriction. I was worried that even though the game is called Shower With Your Dad Simulator 2015, I wouldn’t see any actual penises. Thank Christ we don’t get a gimped experience.

Wait a minute…wasn’t Bad Rats crawling with graphic violence and dismemberment? I mean, I guess it could have just been the first few levels because holy Jesus did that game suck cock, but this does seem a bit like one of those troubling nudity-is-bad-but-violence-is-okay examples of modern American hypocrisy.

Granted, I’m not saying that kids of all ages should be exposed to pixelated dad salamis, but if we’re going to erect an age restriction here, why should we not also do it for games that see you gorily gutting cartoon characters for your enjoyment?

Of course, that’s a much larger and more intelligent discussion than I could ever hope to ignite in a review of Super Soapy Dad 64, so forget I mentioned it.

Have I stalled enough? Do I really have to play this shit? 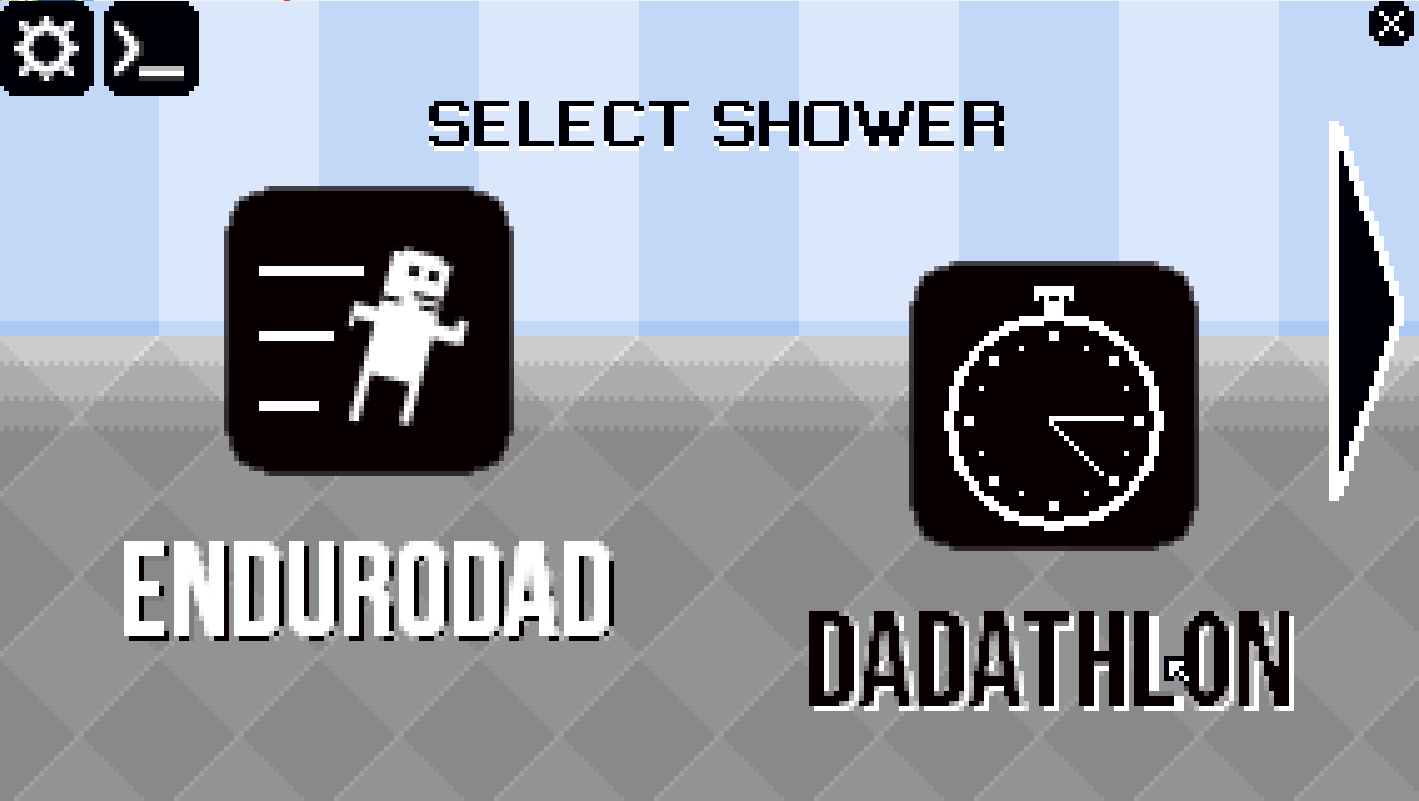 The first thing I notice is how fucking loud the title screen is. Like, embarrassingly so. You know when you watch a movie and you have to turn the volume all the way up to hear anything, but then it ends and for some reason the DVD menu music is about a thousand times louder than the film itself, and you feel terrible because all of your neighbors’ dogs are going apeshit?

Well, this is like that. And I’m really glad I don’t live with roommates anymore; the last question I’d want to answer right now is “What are you doing in there?”

The main menu invites me to choose between ENDURODAD and DADATHLON, which I assume are game modes. There are also a few other icons I don’t understand, but Shower With Your Dad Simulator 2015 isn’t exactly the kind of game that makes you feel comfortable with blind experimentation.

I’ll try ENDURODAD, because if I spend any longer trying to decide I’ll starve to death and the authorities will find me with this fucking thing on my computer screen. 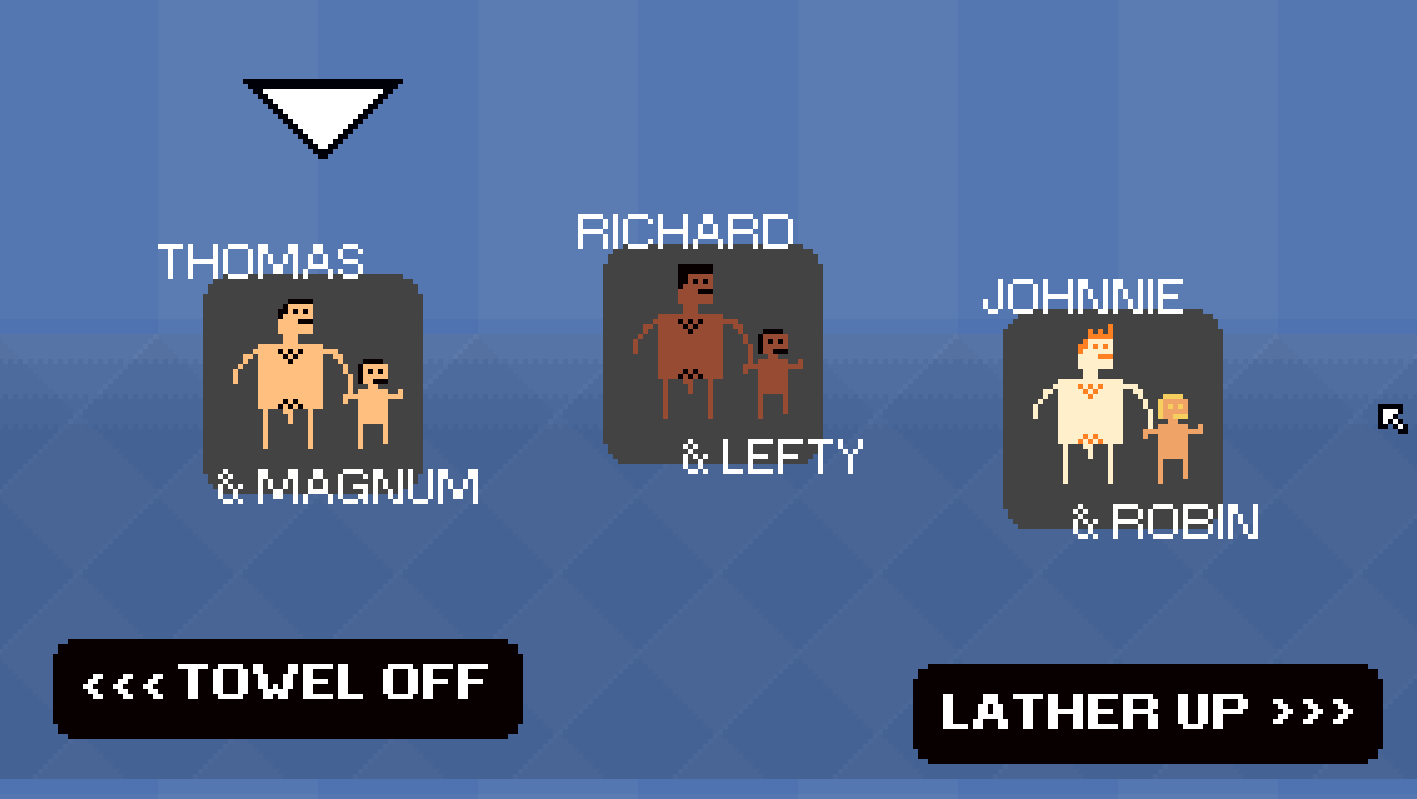 Well, those are certainly some dear old dad dicks.

Then there’s Lefty, which is only less horrifying because Lefty is a word other than Magnum.

At least Robin sounds normal. I’m tempted to pick him just because I’m not immediately convinced that his dad whores him out on Craigslist under that name.

Since I don’t see any character stats or anything here, I have to assume that the differences between couples (pairs? partners? there’s no way to describe this without feeling queasy…) is purely cosmetic, and in true simulator fashion you’re just picking the ones that most resemble yourself and your dad.

If anything, I’m choosing the ones that least resemble any real-world experience I might have. Richard & Lefty, let’s roll. 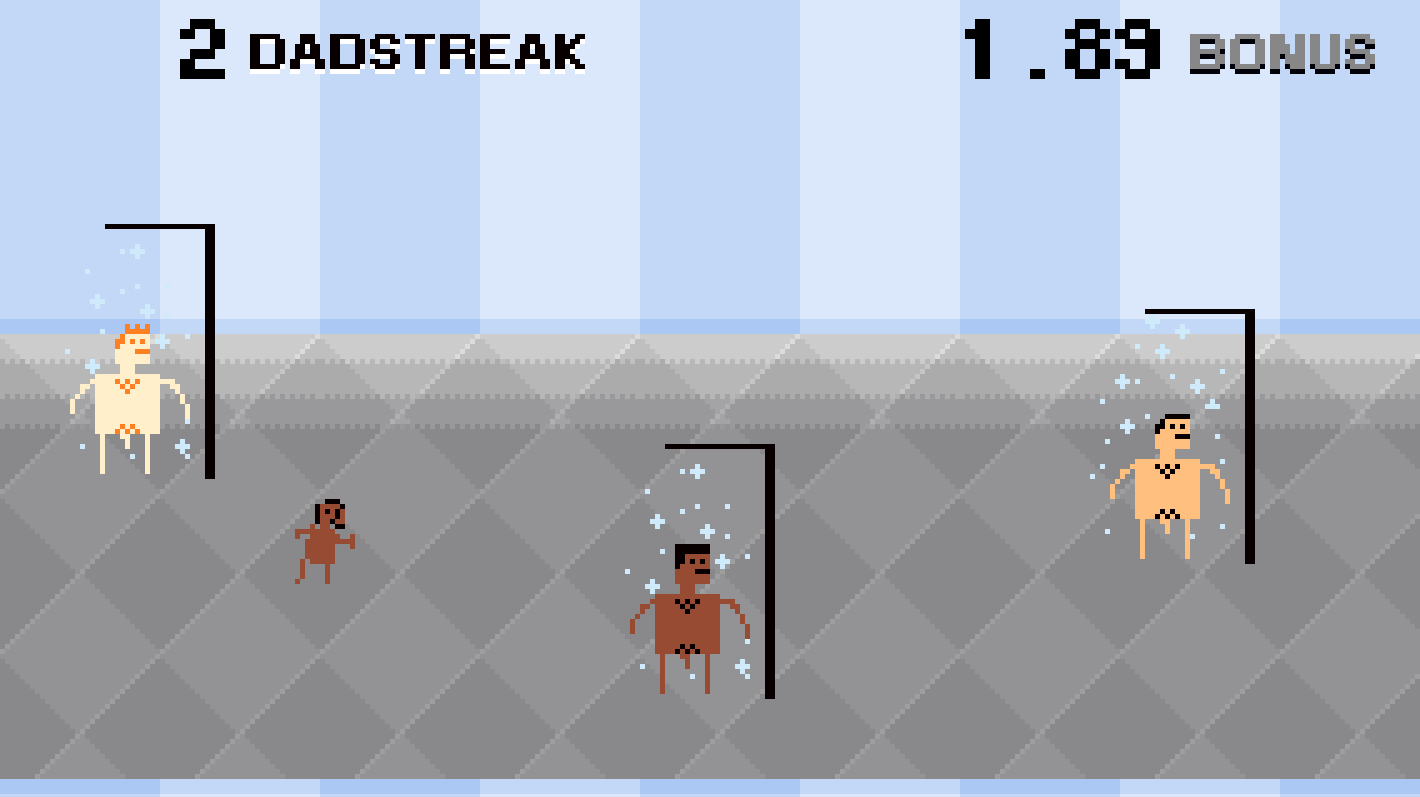 So the game begins, and those sure are some naked, showering dads. I’m controlling the little naked boy, and if you ever find out I’ve been arrested it’s because I typed this sentence.

You use the arrow keys to rocket junior (or…Lefty) around some massive, open shower room. It’s a pretty easy concept…you just need to guide him to his dad. And, not to be rude or anything, but it’s pretty easy to identify Richard, for the same reason you can always pick Ernie Hudson out of a line of Ghostbusters.

You get points when you reunite with your dad, then the scene resets, the dads scramble, and you need to do it again.

Two things are wrong with this. (ONLY TWO) First, why are you reuniting with your dad anyway? Where were you? I can only imagine that in any situation in which you and your naked dad need to shower together in a place full of other naked dads, your dad would keep you pretty fuckin’ close by. Why was this kid allowed to roam free through a forest of dicks?

And secondly: this isn’t a simulator. Don’t get me wrong…I need to sleep at some point in my life so I’m glad it’s not a simulator, but it’s also kind of disappointing that the game is as simple as “move from here to here, then do the same thing again.”

Unless what you’re simulating isn’t the actual showering, but the experience of running toward a shower. In that case, it’s more accurate…but you really shouldn’t be trotting at high speeds in a shower room. A true simulation along those lines would quickly see bits of Lefty’s teeth being carried gently toward the drain.

Anyway, I had to see what happened if I accidentally paired Lefty up with the wrong naked adult male. 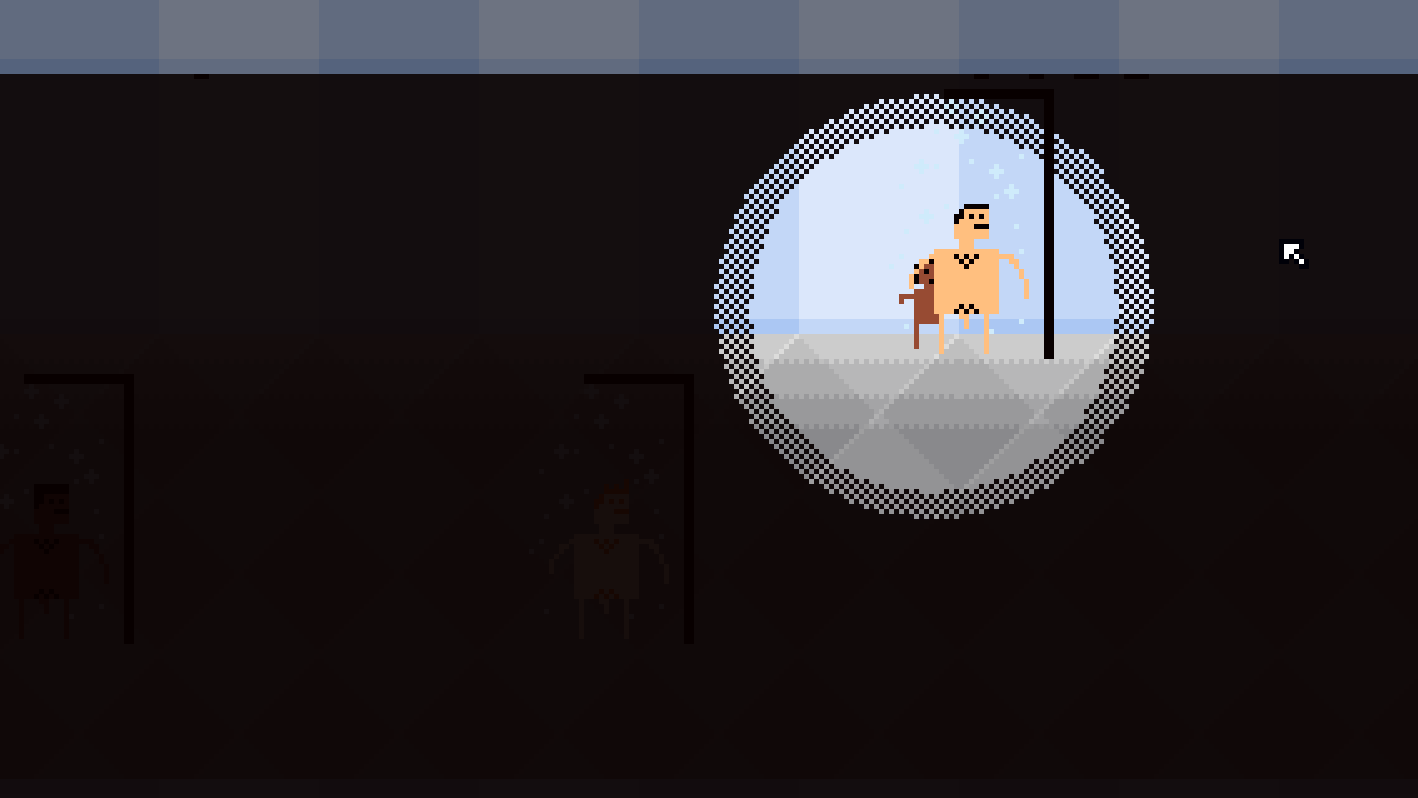 …yeah, I don’t know what I was expecting to happen, but the result somehow manages to be equal parts “nothing at all” and “Jesus Christ my god I want to be killed.”

Anyway, I restarted the game and tried to touch my naked, soapy dad 50 times. I figured that was the least I could do to give Shower With Your Dad Simulator 2015 a fair shake. But after around 30 points the game starts adding obstacles, such as puddles. And while running through them still doesn’t result in your kid cracking his head open on the tile floor, one of them did send my little guy sliding face-first into a stranger’s dangling cock while the kid’s arms flailed helplessly, and that, as they say, was definitely that. 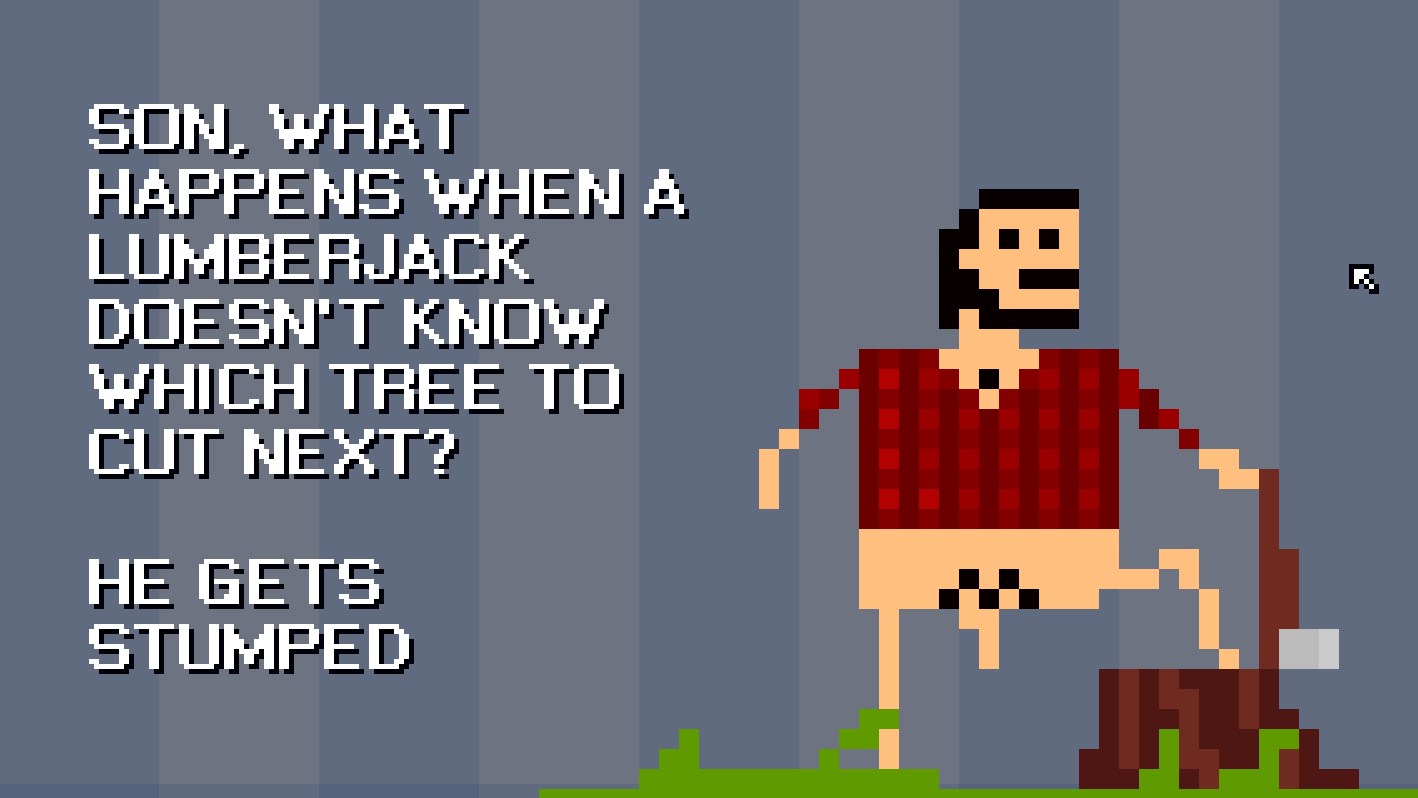 When you choose a mode, you get a loading screen with a dad joke on it.

I do. It’s a nice touch. But this particular one has pantsless lumberjack dad swinging his trunk in the breeze, and I’m not as big a fan of that.

But when you stand like that, with your legs conveniently spread for full display, I’m probably going to conclude that you’re the worst thing that’s ever lived. 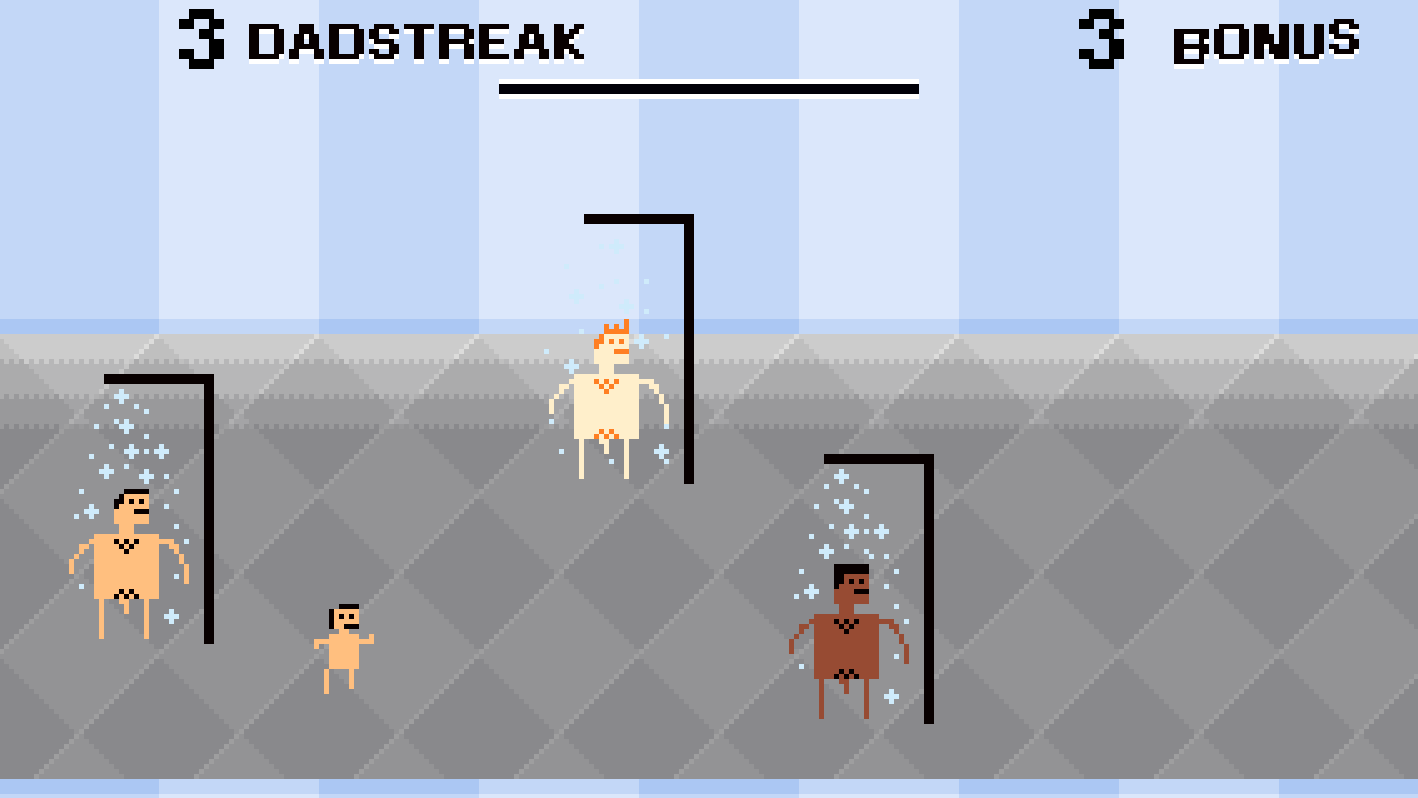 Yeah, I think I’m through with this one pretty quickly. It’s the same idea as the previous mode, except that the kid keeps changing, so you’re always looking for a different dad. I’ll give it credit for this: it’s harder than I thought. (DON’T MAKE JOKES) It also doesn’t last as long as I expected. (DON’T MAKE JOKES) But mainly, there’s a lot of semen in my hair.

The soundtrack is even pretty good, too. It’s all funky, upbeat earworm action, and I’d honestly be perfectly happy to have this on my iPod…if it didn’t remind me of the fact that you are matching naked children to naked men.

Yes, the quirkily revolting concept of Shower With Your Dad Simulator 2015 is going to be the reason this sells at all, but it’s also the main barrier to actually enjoying it. I mean, seriously. Just look at those screengrabs. Does it matter how fun I say the game is? Are you going to willingly download that?

It’ll make money — and probably has already — based on its inappropriate novelty, but it’s a shame that whoever made this couldn’t have designed a fun little puzzler instead, and it’s a shame that the market is so saturated that games need to be smothered in dad taint before anyone is willing to talk about them.

Anyway, that’s the end of Shower With Your Dad Simulator 2015, and we’ll never have to talk about it again… 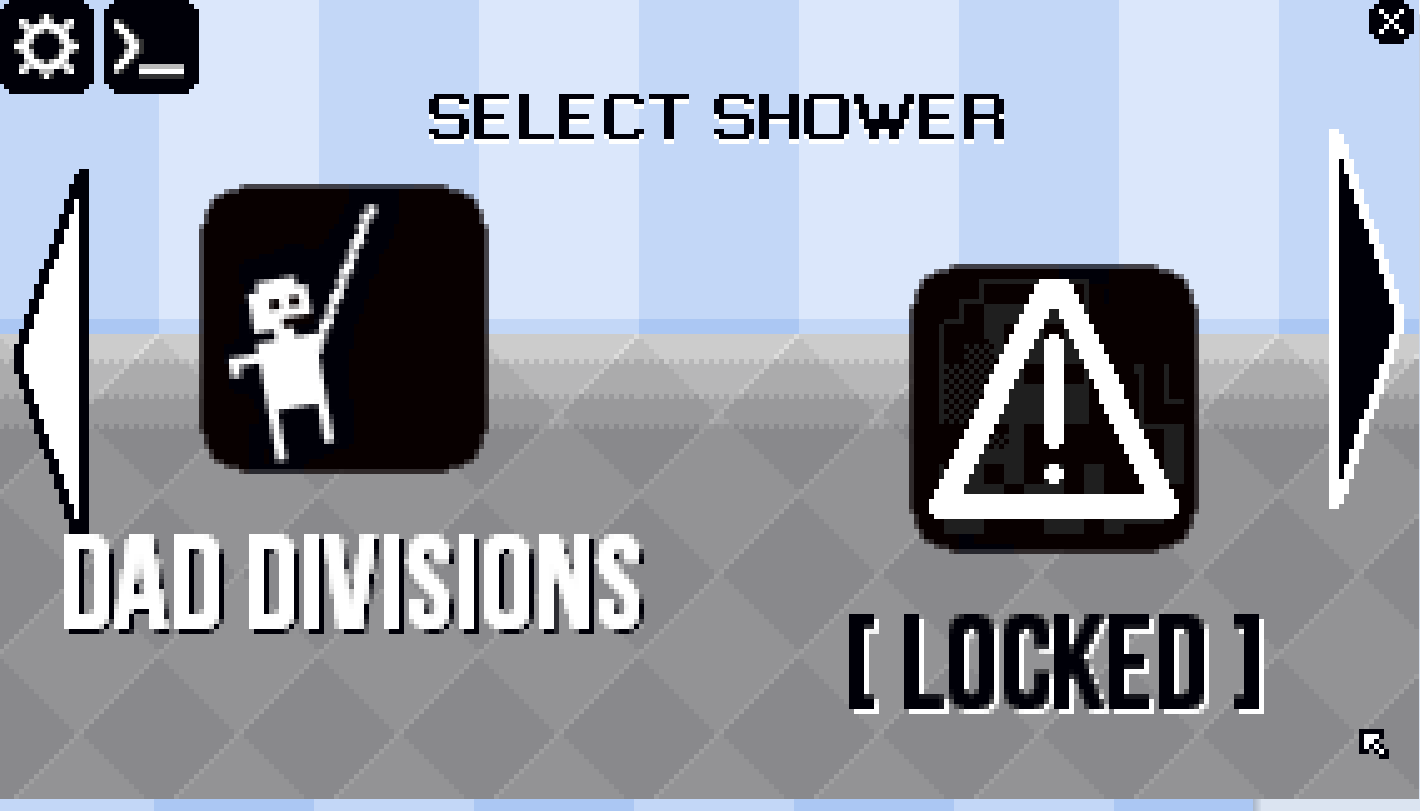 It turns out there aren’t only two game modes…there are a crapload more. Fortunately all of them are locked or require DLC (if any game deserves to be kept alive with downloadable content, it is most certainly this one!) so I only feel obligated to try the one that’s actually open. It’s called DAD DIVISIONS, and nothing about that name is immediately revolting so it’s already my favorite. 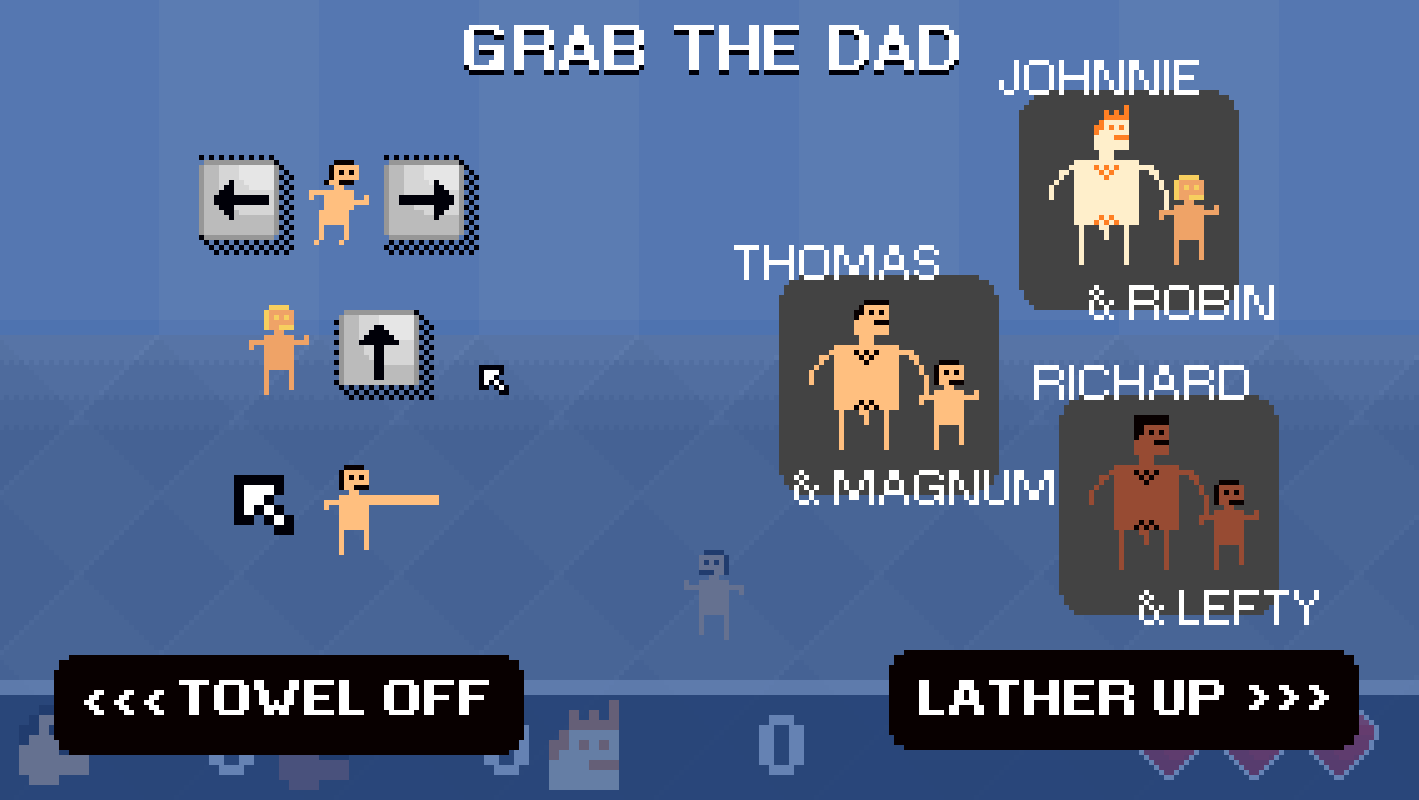 …and I’ll look at the instructions and… 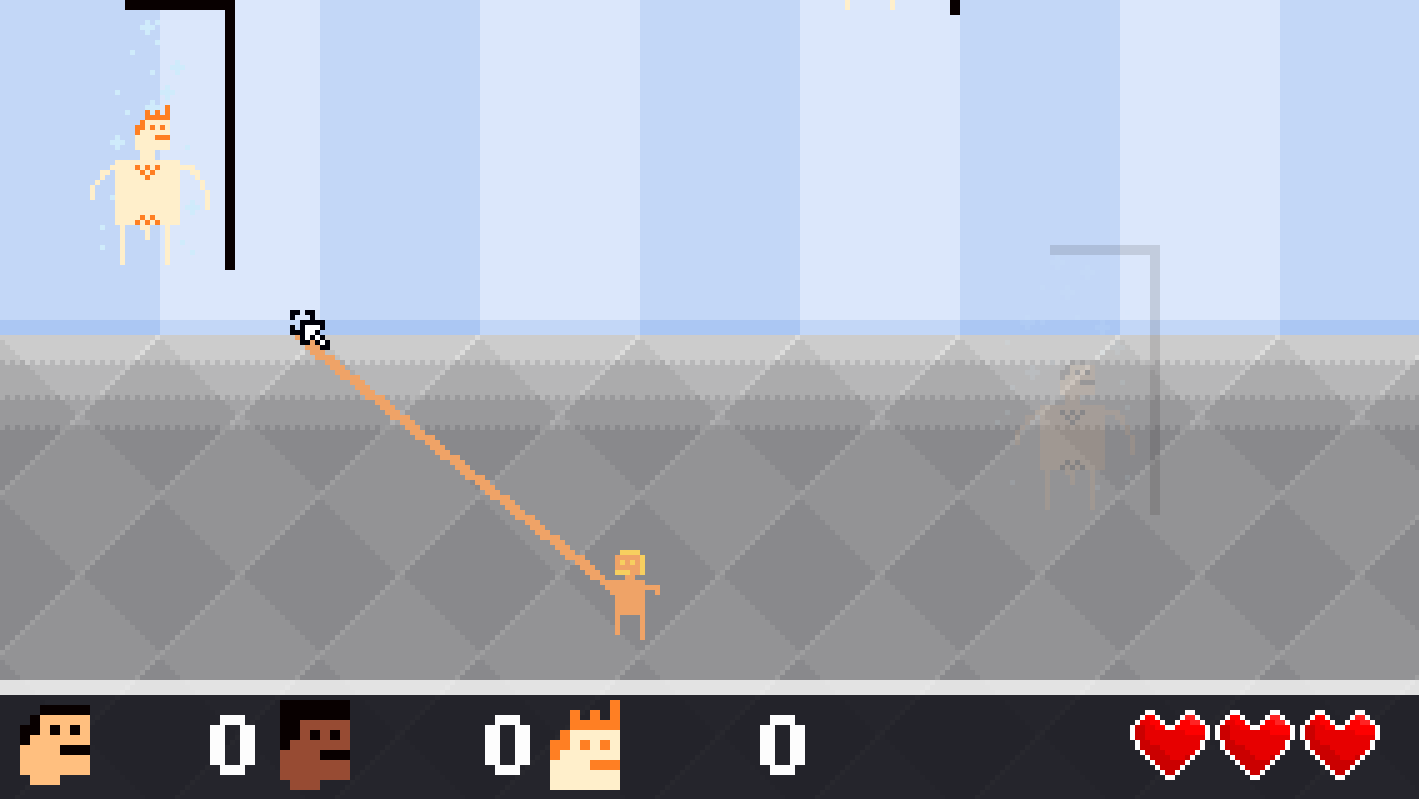 In this game you have to catch the falling dads by extending your appendage at them, and you know what? If you ever see me in public…if you read this blog and one day you see me standing in line for groceries or crying silently to myself in an empty theater…don’t say hi.

I…I mean, I like you guys and all. I really do. Even those of you who are mean to me all the time and call me nasty things. (The joke’s on you, because you’re still nicer than anyone I know in person!) I think you guys are just hella rad and I’m so glad you exist, but please, please don’t say hello to me.

So admire me from afar, point me out to your girlfriends (I guarantee it will get you laid), stuff dollar bills into my pocket, whatever.

But spare us both the embarrassment of talking to me. Like everything in history that’s ever had to do with showering with your dad, this is something that deserves to be repressed.