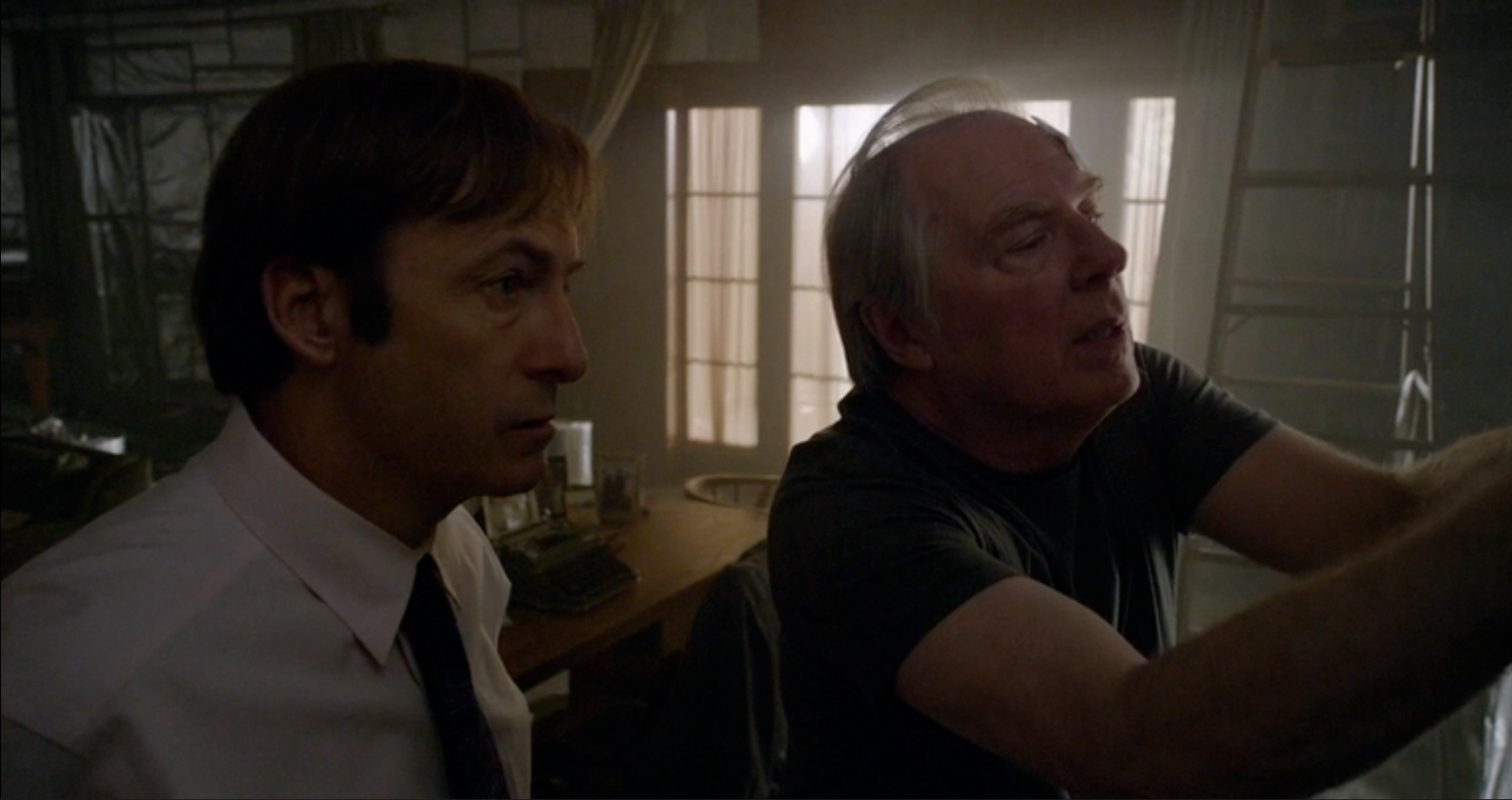 A lot of discussion about Better Call Saul centers around Chuck. Specifically, it’s the question of whether or not he’s right. In his thoughts, in his behavior, in the way with which he wields his authority.

This is a question that speaks volumes about how effectively muddled the show has kept its ethics. After all, we’re now three seasons in; shouldn’t we know whether this guy deserves our spite or our pity?

To be fair, many viewers already know their own answers. But the discussion is kept alive by the artful way in which Better Call Saul toys with its audience. We’ve seen Chuck in various states by this point…sometimes deserving of scorn, and sometimes deserving of sympathy. But the show never lets us land decisively on either side. We may wish to see Chuck one way or another, but we’re left instead to circle, without a conclusive answer.

We ended last season with Chuck tricking his brother into confessing a felony, which is a shitty thing to do, for sure. But that felony was committed against him by his brother, so…y’know. There’s that. What we see — in fact, what we’re explicitly told — is that this isn’t over. Jimmy may be willing to walk amicably away, but Chuck is not. McGill v McGill is a battle that will continue to be fought, even if it never sees a courtroom.

Part of the reason “Mabel” keeps us circling is that it doesn’t share with us Chuck’s plan. It was a gutsy move, from a writing standpoint, to bring Howard so early into the episode to unravel whatever legal fantasies Chuck might have entertained about the tape’s value. In fact, the universal assumption after season two (helped along by some promotional photographs for season three) was that this was going to lead directly to Jimmy being arrested.

The writers of Better Call Saul let a character explain to us in no uncertain terms why that won’t happen, though, as their way of kicking off this batch of episodes. That doesn’t renege on a promise; rather, it makes a bigger one. “You thought Jimmy would go to jail?” it asks. “Oh, if only we went so easy on him…”

Frankly, I have no idea what Chuck has planned at this point. If any commenters have a guess, I’d love to hear it. (I’m incapable even of guessing. I’m completely in the dark.) But I’m willing to trust in the show. This far along, it has yet to dissuade me from doing so.

So, let’s talk about Chuck. Let’s remember who he is. All of who he is. We don’t know his plan, but we know the man. What do we think of him?

Chuck is in an odd position, narratively. By rights we should be siding with Jimmy, as he’s our focal character. That doesn’t mean that we need to see everything he does as the “right” thing to do, but it does mean that his decisions should weigh the most heavily on us. When his forerunner Walter White did something terrible — as he did almost weekly — we didn’t leap to his defense, but we did hold him accountable in ways we didn’t hold other characters.

A timely point of comparison would be Gus Fring. When Gus did something terrible, we had a number of responses. We’d be surprised, frightened, worried, sad…something along those lines. But we didn’t worry for the state of his soul. We didn’t want him to learn from his mistakes and make a better choice next time. We didn’t care or hope that he’d eventually change for the better and extricate himself from this mess, simply because he wasn’t our focal character. We cared about those things for Walt (even if it was only for the safety of other characters), because he was.

Here, Jimmy McGill is our focal character, and Chuck is not. So Chuck can do whatever Chuck does, and it shouldn’t affect us beyond the way in which it impacts Jimmy.

…except that we already know where Jimmy ends up. We already know who — and what — he becomes. We have no reason to worry about the state of his soul, because we’ve spent a lot of time with him soulless. Whether or not Chuck wins, we sure as hell know Jimmy loses.

As a result, Better Call Saul can do a lot of things with Chuck. It can humanize him in a way that Breaking Bad was unable to humanize any character from its roster of adversaries. It can explore him in a fairly liberating way, as Chuck is neither there to be conquered nor to conquer. Either may happen, but neither guides his existence as a character.

And so Chuck gets to be Chuck. A person. A human being with complicated desires. A pitiful genius. A brilliant asshole. A cruel hero. A loving bastard.

We’ve seen Chuck break down, which is sad. But we’ve also seen him pretend to break down in order to manipulate others, which casts doubt on previous moments of weakness. We’ve seen Chuck laid low by (what is surely) a mental health condition, which endears us to him. But we’ve also seen him push the condition aside entirely, with no consequence, which suggests that his affliction may be more conscious than he’s let on.

In “Mabel” specifically we see him instruct his brother like a child about how to remove duct tape, which is dickish. But we also saw Jimmy ripping varnish off the wall when left to his own devices, so maybe it was necessary. Later Chuck shared fond memories with his little brother, relishing sweet details of their childhood, which reminds us of the man inside the monster. But then we also see him actively crush the conversation for the sake of reminding Jimmy that he’s well and truly fucked.

“Your brother is one world-class son of a bitch,” Howard says. He’s speaking of one McGill, but he could as well be speaking of the other.

My girlfriend recently caught up on the show, and at the end of season two she pointed something out to me. Sure, Jimmy stole the Mesa Verde account from Chuck…but Chuck stole it first. They each made an underhanded gambit to steal what was not rightly theirs. They each did it for selfish reasons. They each did it with very little (if any) care for the effects it would have on the actual client.

But, she pointed out, Chuck knew how to do it within the law. Jimmy — younger, more impulsive, less experienced — did not. That was the difference. Jimmy stole it anyway, but without the legal safeguards Chuck knew he could rely on.

Who is worse? Is it either? Is there even a villain in this situation? If Jimmy were not our focal character — if we didn’t already love him from what we remember of a completely different show — would Chuck be a bad guy? Or would he just be…a guy?

I want to hate Chuck, on some level. I don’t want him to leave the show or get killed or any silly nonsense like that; what I want is to be able to look at him and say, “That world-class son of a bitch.” But I can’t. Because he’s a person. And as hard as he comes down on Jimmy, he doesn’t do it without reason.

He holds Jimmy back. That’s bad. But he’s seen Slippin’ Jimmy when there was nothing holding him back. So maybe he has a good reason.

He actively blocks Jimmy from assuming authority. That’s bad. But when Jimmy was given some degree of authority over the family business, the business sank. So maybe he has a good reason.

He doesn’t believe in Jimmy’s ability to practice the law with honesty and integrity. That’s bad. But now that Jimmy’s struck out on his own and he isn’t acting with honesty or integrity…you get the point.

We circle. We circle endlessly. Our opinion of Chuck — as a person, not as a character — gnaws its own tail.

Eventually, that cycle will break.

Either Chuck will go further than Jimmy actually deserves, and become the bad guy, or Jimmy will prove himself bad enough that we start to believe poor Chuck should have gone further.

Ultimately Chuck will be proven right. That’s what our black-and-white flash-forwards tell us at the top of every season. Chuck is correct.

But did he foresee a dark future? Or did he will one to life?

Season three is poised to dig fairly deeply into that question. But by the time it’s over, I have to guess that it’ll still be difficult to hate Chuck outright. He’s not a bad guy, as far as I can tell. He’s just one factor in another man’s inevitable downfall.

We’ll talk a bit about Mike next week, so I won’t muddy the waters (ahem) by bringing him up now, at the end of the review. But I will say that the incredible, long, almost silent scene of Kim laboring over a semicolon — or a period, or an em dash — is one of the most realistic portrayals of writing I’ve ever seen.

I’ll talk more about her next week, too. I’ve spent enough time here detailing one factor in Jimmy’s downfall, and I don’t think the poor guy can handle another.