So, hey again from Casey, one of Philip’s many friends, here at the pivot point between seasons. I hope you all had a Happy Fappiano and are ready to start hiding the eggs!

Again, for the time being, I’ll be posting updates about Philip’s work, and efforts to preserve it. If you haven’t visited here in a while, I’m sad to report that Philip left us in July 2022. I still miss him like hell, but I’m so glad I got to know him, and I’m so proud of what he accomplished.

I’m going to talk about this year’s Xmas Bash! first, because it’s time-sensitive. 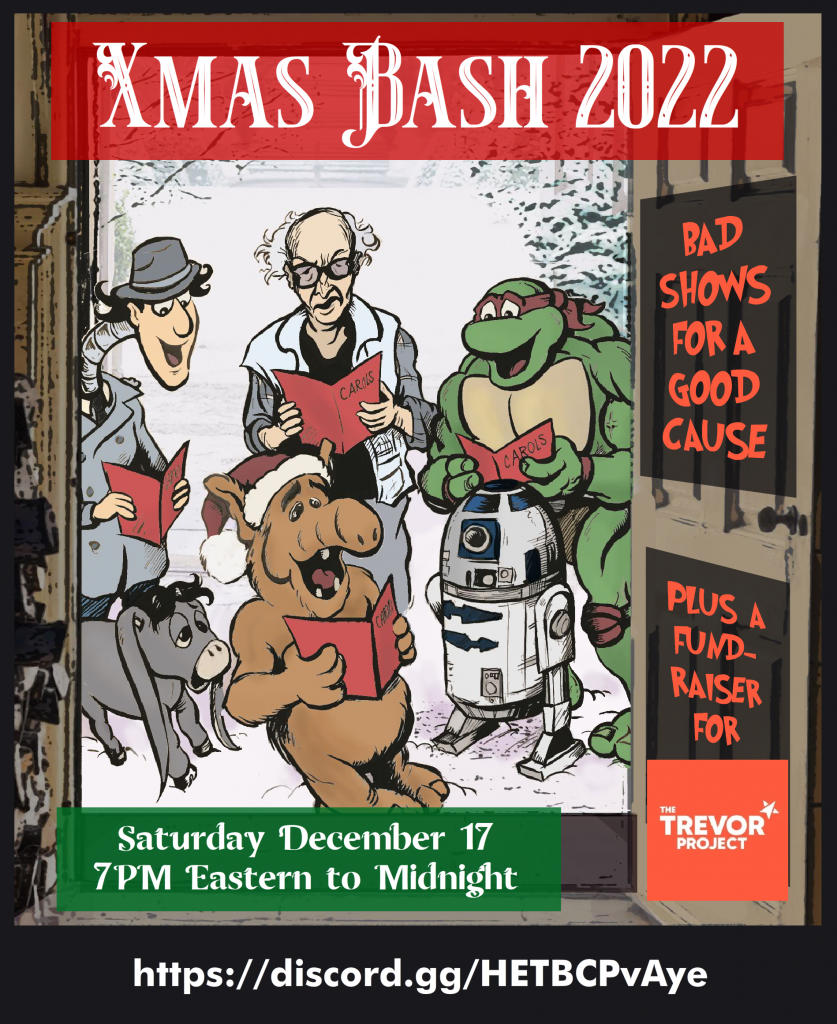 Like always, it’s going to be 5 hours of holiday TV specials (the bad ones), music videos, cartoons, old Christmas commercials, AMANDA, and a fundraiser for the Trevor Project!

Three of the shows are ones that I know Philip had in mind to show at some point. The other four are ones I have chosen as your holiday torture.

The fundraiser page is here: http://give.thetrevorproject.org/xmasbash2022

And we’ll also post it throughout the evening of Dec. 17.

Thank you all for contributing to the Kickstarter campaign for DieDie Books and Philip’s book-length treatment of The Wolf Man. Which, if I understand correctly, was a horror film about radio DJ Wolfman Jack. If you didn’t get a chance to pledge during the campaign, I am told that copies will be available for sale. At this point, I know as much as you do about when you will have Philip’s book in your hands. I know even less about what other nasty things you usually have in your hands, and I’d like to keep it that way.

And thank you to those who came to the Bashtrospective, where a Bash time was had by all! I have received a few requests to make Philip’s hosting videos (themselves from the very first Xmas Bash! in 2013) available to watch somewhere. I wish I could say I’m working on that, and I wish I could say when I will be. But I think there is going to come a point–maybe when we move hosting over–that it will make sense to create a page or two that archive Philip’s non-blog works. There are just difficulties inherent in file sharing right now, and I’d rather do these things once, for everyone, for the foreseeable future, than piecemeal.

We are still waiting for the terribly slow gears at Apple and Google to turn and let us into any of Philip’s accounts, which will allow us to move hosting of Noiseless Chatter onto another account. We don’t know when the current hosting now expires, so if we don’t get it in time, commenter Aidan has backed up the whole site here:

More updates as they come.

Thanks again for being Philip’s friends and loving him.