On the eighth day of Christmas, David Black gave to us… 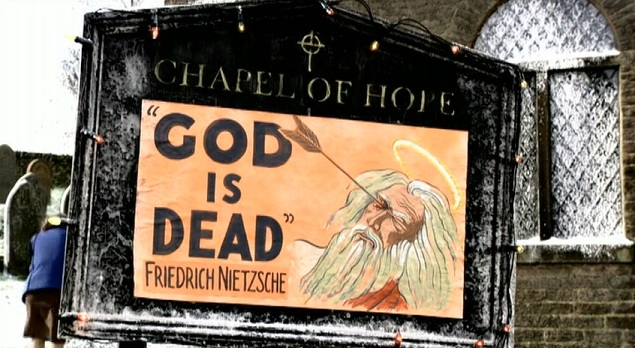 In the run up to Christmas in the year 2000, The League Of Gentlemen published A Local Book For Local People and I wanted it. I was pretty certain that I wouldn’t get it for Christmas as my mother was unlikely to buy me a book that purported to be wrapped in human skin. It’s a scrapbook collecting together newspaper articles, leaflets, postcards and letters about, to and from the people of Royston Vasey. It’s fantastic. I can’t recommend it highly enough. Comedy tie-in books are never this good. I bought it as a Christmas present to myself and pored over every page. Nestled towards the back of the book is an illustrated short story called “The Curse Of Karrit Poor,” which I skipped right over. I looked at the pictures, but I never read a word of it and I can’t explain why.

I eagerly awaited The League Of Gentlemen’s Christmas Special that year and when it finally arrived I was not disappointed. The opening sequence gives us Royston Vasey in the snow, a mutilated robin, yellow snow and a controversial Nietzsche quote on the church noticeboard. It’s a very cinematic sequence in a very cinematic episode of a very cinematic TV show and a step up from some of the other quick gags that opened earlier episodes.

It’s Christmas Eve in Royston Vasey and Bernice Woodall, the town’s vicar, is visited by three characters each seeking solace. Bernice is a fascinating choice to be our guide. The joke that the irreverent Reverend with lipstick on her teeth and a confessional full of cigarettes is presumably an Atheist and possibly the least charitable person in an uncharitable town is one that wouldn’t have sustained her for an hour. We see her character develop here as a result of each of her three Christmas encounters.

Charlie enters the church to deliver a very late and myrrhless nativity scene and takes the opportunity to tell Bernice about a recurring dream he’s been having. We cut to Charlie and Stella line dancing, putting up Christmas decorations and arguing. Charlie and Stella are among my favourite characters and I absolutely love that they get this first vignette. Reece Shearsmith and Steve Pemberton gave their relationship such depth that it always deserved to be explored further. The initial idea of the earlier sketches of the couple arguing for the benefit of a third party grows into to a brilliant short story with a fantastic twist. Liza Tarbuck, the Eyes Wide Shut coven who do voodoo and Stella’s mask are all wonderful, while the slow hand clap is unremittingly bleak.

We return to the church for one of my favourite moments in the entirety of television history: Charlie’s pause and subsequent answer to Bernice asking “In your heart of hearts, do you love your wife?”

Charlie departs and is soon replaced by another storyteller. Andrew Melville is fantastic as the old Matthew Parker, but I must confess that for years I was convinced it was Mark Gatiss in heavy make-up. He takes us back to 1975 in Duisberg in Germany and into the home of Herr Lipp. This is another short tale with another brilliant twist that I certainly didn’t see coming and a raft of sexual innuendo and references to Vampire films. Gatiss and Shearsmith are wonderful as Frau Lipp and young Matthew Parker respectively, but the truly astonishing thing about this segment is that Pemberton manages to take a grotesque character, not to mention a sexual predator, like Herr Lipp and yet give him a genuine sense of pathos all the while being very funny into the bargain.

Herr Lipp: Sometimes the inside of something can be beautiful, even if the package isn’t…well…isn’t.

Matthew: Leave me alone.
Herr Lipp: I will try. 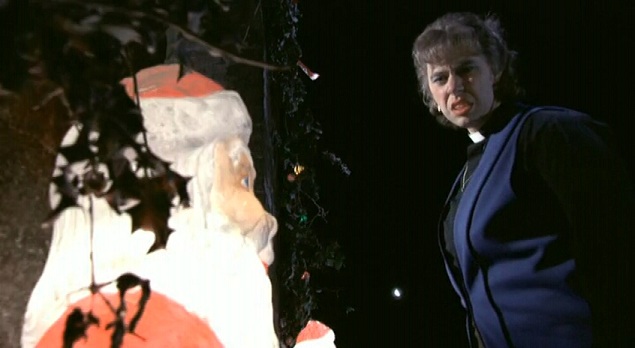 Out goes Parker and in comes a bloodied Chinnery for our third story as the vet tells the vicar about his great-grandfather.

Bernice: Oh God, it’s getting like bloody Jackanory in here.

The resulting tale is as rich and classy a slice of Victoriana as the BBC has ever produced. Frances Cox, Freddie Jones, Boothby’s bicycle,  “next door,” and seeing Chinnery as his own great-grandfather are all great.

Boothby: Now then, lad. Old Majolica sings your praises and that’s good enough for me. I can offer you a hundred a year, food, lodgings and unlimited use of a bicycle. What do you say?
Chinnery: I’d be delighted.
Boothby: Capital! I think we’ll get along well. There is only one other matter, my senior partner, Mr. Purblind, is an invalid. He occupies the last room on the third floor. He never stirs from his bed from dawn till dusk…save to go for a wee.
Chinnery: You wish me to visit him?
Boothby: On no account! Mr. Purblind is a very sick man. The slightest disturbance is abhorrent to him. Do you hear me?
Chinnery: Yes, sir.
Boothby: All my doors are open to you, Chinnery. Except the ones that are closed.

For their part, Shearsmith and Pemberton’s creations Boothby and Majolica are wonderful, with the former’s bicycle obsession and the latter’s evil echo of Series Three’s Dr. Carlton being particular highlights.

In spite of his warning (and probably because of it), Chinnery later finds himself in Purblind’s room where the old man tells him the story of how he came to be cursed to kill every animal he came into contact with. The effect of Purblind’s story builds through the brilliant use of shadow puppets to the surprising reveal of a unique necklace and via a gleeful moment of Freddie Jones swearing. Chinnery feels the knackers and unwittingly takes Purblind’s curse upon himself, but dismisses the possibility as “cheap mummery.” His return to his London practise and a simple surgical tap that is but “the work of moments” causes an animal massacre of epic proportions.

Majolica: Another vet has touched the monkey’s bollocks. And now you and all your descendants shall suffer the curse of Karrit Poor!

There’s that name again. Every time I watch this I mean to search out my copy of A Local Book For Local People to read about the curse of Karrit Poor in “The Curse Of Karrit Poor.” I never do. We return to the present day and Bernice convinces Chinnery to get back to work.

Throughout its first two series, the show referenced and alluded to a great many horror films, but uses its Christmas Special to pay tribute to an often overlooked subgenre: the portmanteau film. These are films made up of shorter stories united by framing device. It was a subgenre that I was previously unaware of, but examples include Dr. Terror’s House Of Horrors (1964), The House That Dripped Blood (1970), Tales From The Crypt (1972), New York Stories (1989) and Four Rooms (1995). 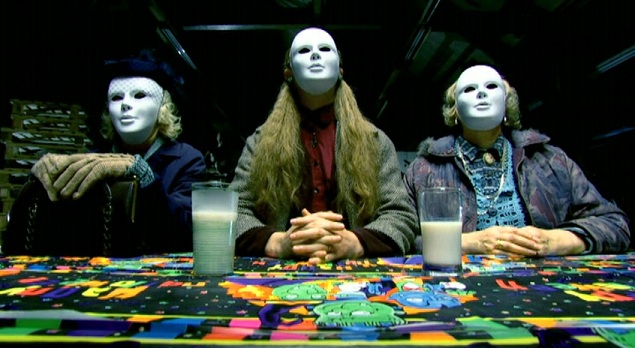 The absence of Tubbs and Edward really allows some of the other characters to flourish and the portmanteau sequences allow the Gentlemen to have their cake and eat it too. Did those events happen as described? Will Stella be framed for murder? Is Herr Lipp a Vampire now? Is Chinnery’s inability to keep a patient alive the result of the curse? Possibly, but would it really matter if the only thing that really happened were the sequences set in the church? I don’t think so, because they are arguably the most horrific of all.

The framing story of Bernice has given us flashbacks to her childhood and reveals that her mother was abducted at Christmas when she was eight years old. She is invited by three visitors to reassess her attitude to Christmas and she does mellow as the evening has wears on. To the point that she inspires Chinnery, plans to do nice things for her parishioners on Christmas Day and, potentially a first, she apologises to someone. Bernice’s childhood catches up with her as Santa Claus comes to town again and this time he takes her away with him. Papa Lazarou’s fleeting appearance here serves to cement him as one of the most horrifying television monsters. Not only does he steal Christmas, but he undermines everything that has happened to Bernice all night. Even after the life changing visits of Scrooge’s three ghosts, it would probably have brought his new demeanour to a brief conclusion if he had been kidnapped and inserted into an elephant on Christmas Day.

There was a definite shift in style as the series progressed. While the first series could be legitimately described as a sketch show, the second was more of a sitcom. Now with the benefit of hindsight it’s easy to see the Christmas special as the bridge between that and the more comedy drama style of Series Three. Not least because they dropped the laughter track and the funny thing is that you barely notice here

The three onscreen members of The League Of Gentlemen are rightly applauded for their acting abilities, indeed we can all be grateful that three of Britain’s best actors were on screen at the same time, but in complimenting that aspect of the show let’s not ignore the writing and the fourth Gent, Jeremy Dyson.

The genius of The League Of Gentlemen is their juxtaposition of highbrow and lowbrow. They can take a brilliantly intricate and rewarding story about voodoo revenge and dismiss it as a cheese dream. They can take a potentially one note character with pun for a name and single entendre dialogue and play him with complexity and honesty. They can make a sumptuous Victorian horror story full of intrigue and have the entire thing revolve around the cupping of a monkey’s lovespuds. They can take something as potentially sentimental and syrupy as a Christmas special, force its bitter central character through the wringer, make her learn a lesson and then ultimately prove her right all along. They take a central tenet of sitcom, that characters don’t develop, and then they earn it.

Here I am twelve years later and I’ve finally gotten around to reading “The Curse Of Karrit Poor” in A Local Book. I liked it. Not more than the TV version, but I liked it. The one thing I found most comforting and reassuring was that it also takes both the high road and the low road.

“A story so fantastic that it might seem to have sprung from the ravings of some brain fevered Eastern mystic. Or a twat.”
–From The Curse Of Karrit Poor, being the reminiscences of “Dr Edmund Chinnery R.C.V.S.”

Tomorrow: A very adult show for children reminds us of just how far apart these phases of our lives can be. (Not intentionally, obviously.)