As of this writing (April 22) the released footage from Moonrise Kingdom amounts to no more than a trailer, and three exclusive clips drizzled around the internet. Each of the clips are under a minute long and don’t really demonstrate much beyond the fact that Wes Anderson is absolutely at his most Wes Andersony…and that it’s still a beautiful thing. We’ll touch on those below, but only in passing, as this is a look at the official trailer for the film.

If you are interested in seeing the clips, you can watch them here, here and here. No spoilers, apart from what we already know from the trailer, but, as always, watch at your own risk. And please link me if you know of any other footage I missed.


In summary, yeah, this looks pretty fantastic. Growing up has always been one of Anderson’s favorite themes, though this looks like it will tackle the issue head on for the first time since Rushmore. (It was skirted in The Royal Tenenbaums by using childhood as a mechanism for gauging how far the characters have fallen, and subverted by The Life Aquatic With Steve Zissou and The Darjeeling Limited by presenting us only with a view of their adult lives, leaving us to piece together what got them there.)

It looks lovely, brilliantly dreary and evocatively sad, with a late summertime feel, just before all that wonderful freedom falls away and it’s time to get back to school. There’s also no strong clue as to the film’s reappropriated pop songs (at least not to me…can anyone identify the French song in the trailer?), so that should make for a nice surprise, but it does sound like the soundtrack is pulling toward a sort of classical Gothic dirge. With this, I am both fine and in love.

Here’s what else we see in the trailer: 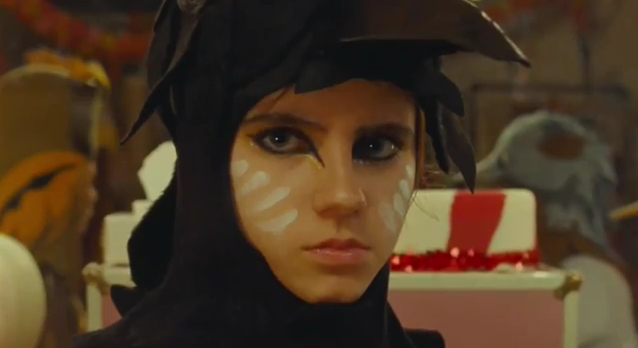 No. I said, what kind of bird are you?
An absolutely beautiful moment opens the trailer, with Jared Gilman declaring his affection for Kara Hayward the only way Wes Anderson’s characters know how: by saying something different entirely. It’s a wonderful way to open the trailer — and it’s safe to say that it comes pretty close to the beginning of the film as well — and it suggests that Anderson might have struck gold again with a young actor in Gilman. His last major discovery of a young actor was Jason Schwartzman, and that sure as hell worked out pretty well. In fact, Anderson has an eye for young actors, or is at least much more careful in vetting them than his contemporaries, because I’m not sure I’ve ever been annoyed by any of the little scamps darting around in the sidelines of his films, whereas usually they detract by default and you need to work to overlook them. (The little girl who plays Grace in Bottle Rocket is admittedly distractingly unskilled at being an actress, but since then he’s had a pretty strong streak in casting the young.) It will be interesting to see how this one pans out. We don’t get to see much of Hayward in the trailer, so it’s more difficult to gauge her performance, but that’s okay…Gilman’s taken away my concern for both of them. 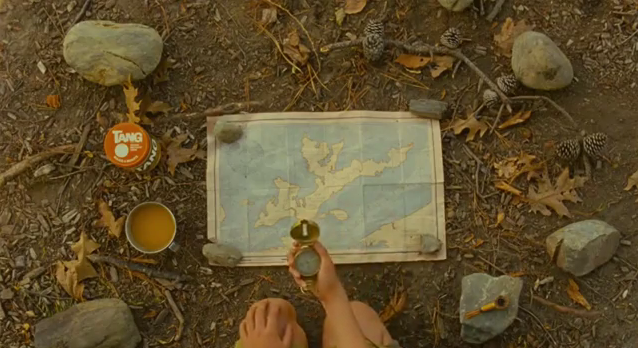 Turn right, and follow to the end.
The love birds (get it…?) plot their escape over several quick flashes of communication and preparation, which I suspect is lifted more or less wholesale from the film and isn’t trimmed much here. Their one-word exchanges are typical of Anderson characters, and the fact that they took time to write such simple letters — and to communicate in a less personal way, thereby remaining guarded — hearken back to both Ned’s pre-addressing of 50 envelopes for Jane to correspond with him in The Life Aquatic, and Richie’s blunt communications by telegram in The Royal Tenenbaums, in which he says things he’s only comfortable saying because he knows he’s several layers removed from the rest of the world. The sharp cuts are all beautifully framed and demonstrate that Anderson hasn’t lost his flair — or compulsion — to make even his briefest visual statements hit both deep and hard. Gilman’s instructions to Hayward, along with what we actually see him doing, tap directly into the things he’s learned in the Khaki Scouts, and it’s going to be fun to piece together their lessons and routines from the way we’ll see them exploited…much as we were able to do with Team Zissou. 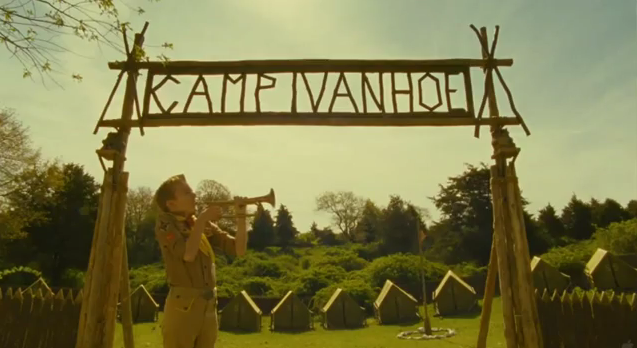 Who’s missing?
Camp Ivanhoe. Yeah, one of the things that worries me — in fact, the only thing that worries me, and it’s a pretty small worry — is the title of this film. Moonrise Kingdom doesn’t feel particularly evocative of anything…or, rather, it feels like it’s trying a little too hard to be evocative. Bottle Rocket was a metaphorical title referring to Dignan’s bright — but always brief — burning for change, Rushmore was named after the academy Max attended (and also served as a metaphor for personal ambition), The Royal Tenenbaums was a gloriously two-sided title, referring both to the family as a whole and their lost regal status, The Life Aquatic With Steve Zissou evokes both images of sea life and life upon the sea, not to mention life itself, The Darjeeling Limited is named after a fucking train so, okay, that one sucks too, and Fantastic Mr. Fox was the title Roald Dahl chose and was the least of that film’s worries anyway. But Moonrise Kingdom just feels to me like it deserves to be attached to a forgettable Mickey Mouse video game than a Wes Anderson film. I reserve the right to change my mind immediately upon seeing the film, of course, but calling the Boy Scout analogue “Khaki Scouts” feels like something they’d do in a Saturday Night Live skit because they didn’t have any time to think of something better. A bit of a disappointment there, albeit an early and easily corrected one. Camp Ivanhoe, on the other hand, is legitimately hilarious. 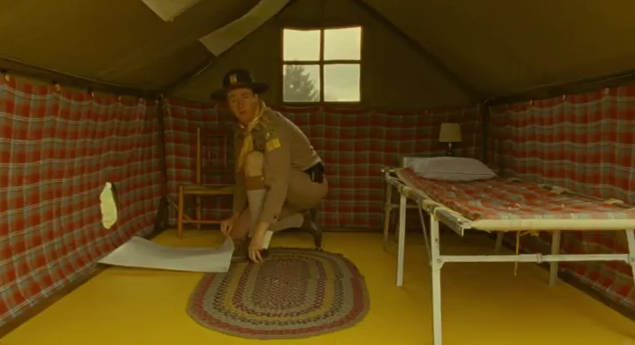 Jiminy Cricket! He flew the coop!
Another bird reference here, which, I hope, will be carried through as a complete theme. We also see Edward Norton for the first time as the scoutmaster, and it’s pretty immediately apparent that he’s playing a live action Ned Flanders. If anyone could do that, it’s Edward Norton, so I’m more than happy enough if that turns out to be the case. His expletive substitutes may well turn out to be annoying, but Anderson’s quite good at measuring out his quirk just enough that it’s cohesive, but never so much that it’s overbearing, or unconsciously annoying. Norton has the potential to be a great addition to Anderson’s growing assembly of actors, so I’m interested to see how this pans out. 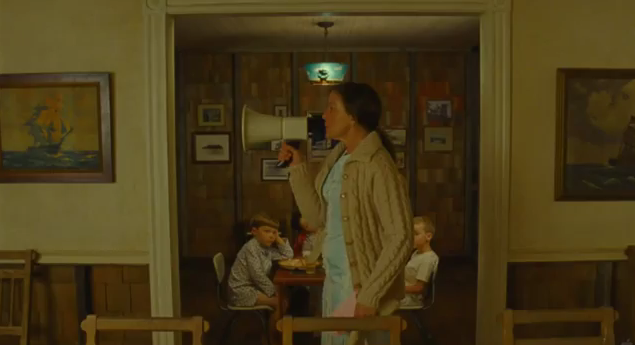 Does it concern you that your daughter has just run away from home?
Frances McDormand’s bullhorn is a bit disconcerting. What I said above about Norton’s profanity-free obscenities holds true here, as I do think Anderson is fully capable of regulating these personal crutches and affectations so that they have the correct impact, but the bullhorn feels a bit obvious, and he’ll have a much tougher time keeping that from getting annoying. It could work in the same way that Chas Tenenbaum’s matching track suits work as a method of keeping his children immediately identifiable in a crowd — and therefore safer and easier to reach should anything happen — but if the bullhorn charts the same territory then I’ll be even more doubtful about its necessity. Of course, McDormand is fantastic and will be another great addition to Anderson’s cast. Marrying her character to Bill Murray’s also suggests that she’ll fit more easily into the ensemble than it might seem. 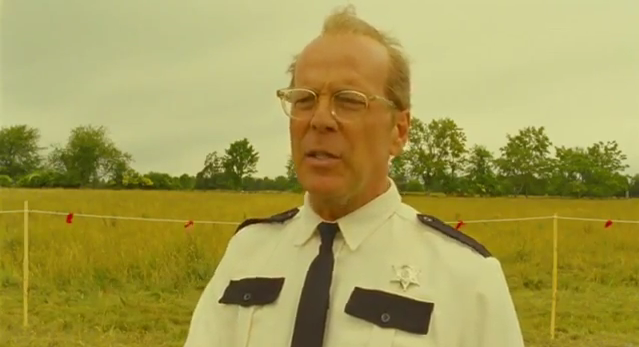 Until help arrives I’m deputizing the little guy, the skinny one, the boy with the patch on his eye, to come with me in the station wagon.
If any name that popped up in the cast list thrilled me outright, it was Bruce Willis. Willis is an extremely capable actor who, unfortunately, does not always get roles that allow him to show off his considerable range. Working as a comic character in a Wes Anderson film is no doubt going to let a lot of his relatively dormant talents run free, and I absolutely love the low-key, ineffectiveness of his uniform. The badge is hardly visible against his unassuming white shirt, and the black tie suggests — presumably correctly — that the police are a mere formality in this town where nothing ever much happens. I like this. 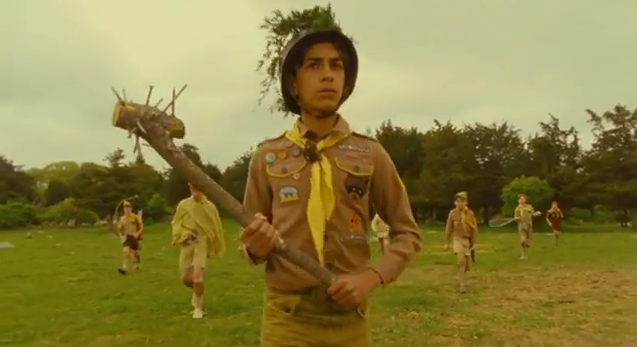 If we find him, I’m not going to be the one who forgot to bring a weapon.
The idea that the manhunt (or boyhunt) might get dangerously out of control is floated in this trailer — and in one of the clips released — but I don’t think it’s going to be a genuine danger in the film, and is more likely to be played for laughs. At least, I hope that’s the case, as preteens actually beating each other senseless with blunt objects would be about the last thing that I’d expect from this movie. Still, it’ll be interesting to watch it unfold, and it’s liable to lend a sense of increasing urgency to the events of the film, in much the same way that the otherwise ineffectual pirate attack caused Steve Zissou to take a stand with his crew — or perhaps that should be the other way around — and ultimately forced him to consider the wisdom of his quest in a way he hadn’t before. Not that the reflection helped anything. For these characters, it never does. And that’s why we love them. 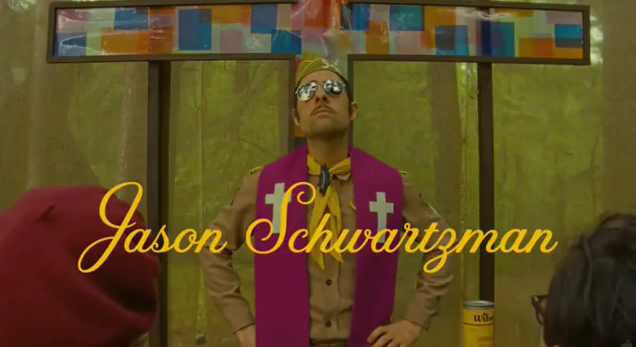 Our only look at Jason Schwartzman in this trailer, but my goodness is it a great one. There’s so much I’d like to say about this single frame, but I won’t do it. I’d cheapen it. Just look at it yourself. Just take a moment — a full minute — to stare at it, to study every detail, and to just immerse yourself in how absolutely fantastic this image is. Let your eyes see everything. Let yourself appreciate it. Because this is a fucking artist at work. Whatever misgivings I might have about what I’m about to see, this is the kind of still frame that makes all of my apprehensions disappear. 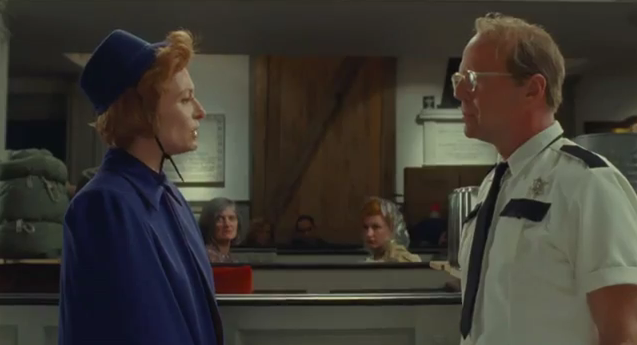 I’m told that he’s just been struck by lightning.
Unlike Frances McDormand, I’d kind of preferred Tilda Swinton to have stayed within the Coen brothers talent pool. She’s not bad at all, but she’s the type of actor that I find very distracting. I’d put Jack Nicholson in the same category. They’re great, but it’s difficult to separate them from the characters they’re meant to be playing. Swinton just seems to pulse icy hatred through the air at all times, and while I know that that’s usually what she’s trying to do, I think it’s a little too easy to see her trying to do it. She doesn’t disappear into roles the way others can, including Willis, Norton and McDormand, so I’m a little less interested in seeing more of her character because I can already guess what it will be. In one of the exclusive clips dropped online, it becomes apparent that she’s playing a human version of Miss Finch from Follow That Bird. Unlike Norton’s personification of Ned Flanders, this doesn’t sound like a notable deviation from anything else she’s done, and she’s the one aspect of the casting that, I’m afraid, leaves me cold. 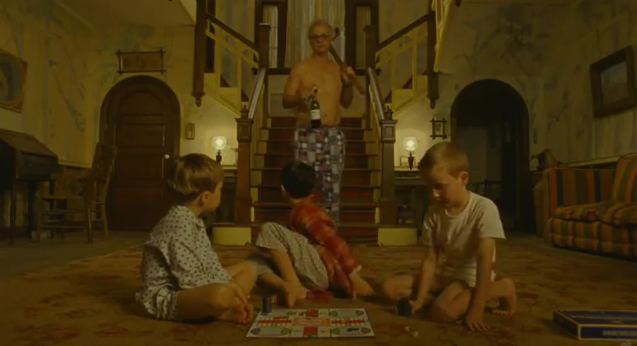 I’ll be out back. I’m gonna find a tree to chop down.
…but whatever concerns I might have outlined above, the real moral of the story is that we end the trailer with a reminder that Wes Anderson knows exactly what the fuck he’s doing. Give me a drunk Bill Murray with an axe, and you’ll have me on your side forever.