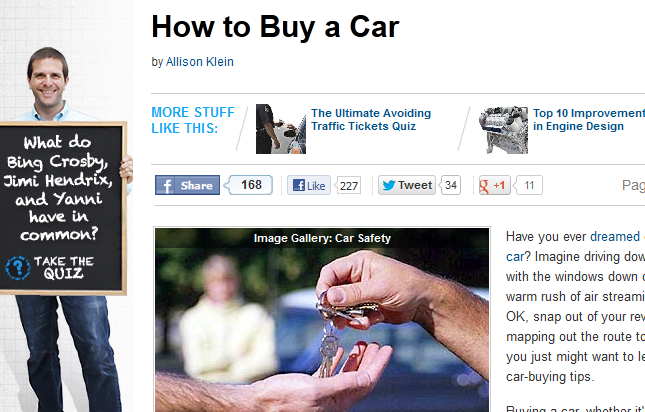 The image above is a screengrab of an ad I came across while doing some linkbuilding. It hopes to get me to click it by enticing me with the following question:

What do Bing Crosby, Jimi Hendrix and Yanni have in common?

I’m sure there’s some more interesting and obscure connection between them — or I assume there has to be, by mere virtue of the fact that the question was posed at all — but doesn’t this enticement fall at the first hurdle when all three things are immediately connected anyway?

After all, it’s not like these three individuals had minor, relatively-unknown careers in music before they became famous for something else…music is the first thing anybody thinks of when they hear those names.

Maybe the advertiser just doesn’t understand how these things are meant to work. You can’t ask something like “What do bananas, coconuts and oranges have in common?” and expect people to give you the chance to say “They all have inedible rinds” or something. They’re going to say, “They’re all fruits.”

That’s that. The question is answered. There’s no incentive to await further information because the question, as you posed it, was hardly a question at all. It was just a list of three things that slot quite obviously into the same, universally-acknowledged list.

I don’t know. It’s interesting to me when advertisers miss the mark, and I always feel compelled to dissect it when it happens. After all, it’s the job of an advertiser to be smarter than the consumer, to anticipate attention and behavior. Here, it just makes them sound dumb, and that disappoints me enormously. If advertisers can afford to come across as sounding dumb, what does that say about the people they need to be smarter than?

Now if you’ll excuse me, I have to get back to pondering what pigeons, robins and bluejays have in common. I’ve nearly cracked it.