On the twelfth day of Christmas, Ben Gallivan gave to us… 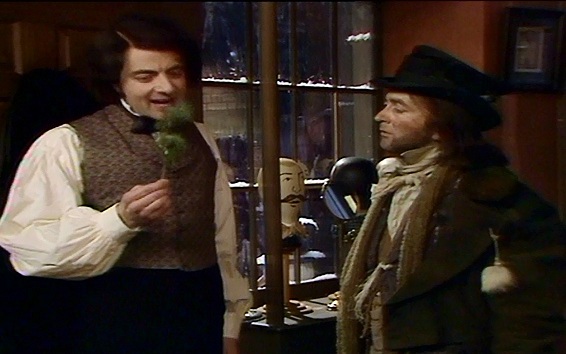 Do Americans have mint humbugs? Do they sell them at confectioners in outdated imperial measures like they do here in the UK? Well, let it be known that I visited my local confectioners here in sunny Cardiff, UK earlier today and was charged a frankly extortionate £2.23 (around $3.60) for a tiny bag of them. No wonder Ebeneezer Blackadder is pissed (off).

Anyway, to business. Blackadder and his compadres are something of legend in these parts. For the last 30 years, Mr E. Blackadder, Mr S. Baldrick and the other characters whose names and titles change with every series have become somewhat of a national treasure and with good reason. “Blackadder’s Christmas Carol” was set in between the Georgian era – that of Blackadder The Third and that of The Great War which featured in the never bettered Blackadder Goes Forth, planting us well and truly in the middle of the Victorian era.

Even if you don’t know the episode, the title alone should give you some idea of what to expect. Lifting as lightly as possible from the storyline of Charles Dickens’ A Christmas Carol, we are thrust into the late 1800s to find Blackadder and his faithful (although we know not why) servant Baldrick, running a ‘moustache shop’ in London. As an aside, it’s worth looking through the cast list to discover many of the great comic actors of the day taking part in this yuletide comedy-fest. Not only do we have the obvious talents of Messrs Atkinson and Robinson, but regulars such as Stephen Fry and a very pre-House Hugh Laurie also show their faces along with Miriam Margolyes, Jim Broadbent and Miranda Richardson. Hollywood would be bursting at the seams to get that bunch on board, you can be sure.

I am not particularly au fait with any Dickens tome; there may be parts of this little essay where you want to shout and scream at your little laptop screen at inaccuracies and wish to render me immobile, but the fact is, I was brought up in the 1980s and not the 1880s so most of my knowledge of history comes from the pen of Richard Curtis and Ben Elton.

Throughout the Blackadder series, the title character has always been the cunning, sarcastic one but in the first scene of the Christmas Carol episode, he is in a rather jaunty mood; something that has very rarely been seen before or since. Described as “the nicest man in England,” even the studio audience seem little at ease with this different persona. He is in fact, pretty much how we find Mr Scrooge at the end of the Dickens classic – even at the age of 10 when I first saw this, you could kind of see what was coming. 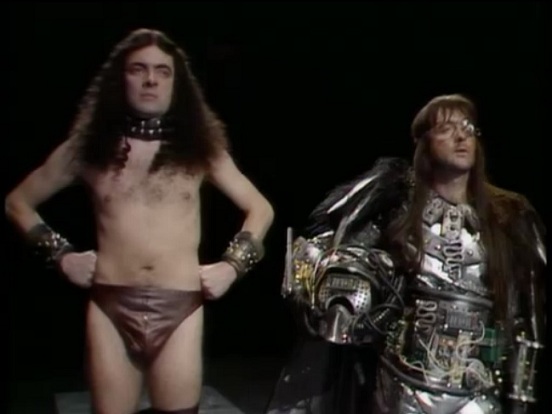 Despite this, one actually feels sadness for him; his over-generosity to anyone means that visitors to his shop are pretty much guaranteed a favour or an extra piece of the pie rendering Blackadder himself lonely, sad and completely broke. Despite the jollity, he still does get the brutal digs in every now and again.

Mrs. Scratchit: [crying] No goose for Tiny Tom this year.
Blackadder: Mrs. Scratchit, Tiny Tom is fifteen stone and built like a brick privy. If he eats anymore heartily, he will turn into a pie shop.

Plus of course the lewd comments, undoubtedly supplied by Mr Elton, given that it was all he could write. A touch of the Carry On… series infiltrating some otherwise excellent comedy writing.

[Blackadder holds up a small pine twig which acts as their Christmas tree]
Baldrick: It’s a bit of a tiddler ain’t it?
Blackadder: Yes but size isn’t important my friend. It’s not what you’ve got, it’s where you stick it!

The most memorable scenes are of course the writers’ take on the ghosts of Christmas past, present and future. They take shape as one entity – the Spirit of Christmas played by Robbie Coltrane. If the casting agent didn’t get a huge slap on the back for choosing him, then I’d happily go to his house to do that right now. His initial reason for visiting before going off for more hauntings and a “scare the bugger to death” was to congratulate Blackadder on his virtuous and philanthropic ways but instead his visit takes a turn.

Whilst showing him visions of his ancestry – all of which behave like bounders and cads – Blackadder becomes more intrigued than appalled and seemingly wants to be more like them, much to the worry of the Spirit of Christmas. Insistent on knowing how things would turn out in the future, we are transported into an unknown era (but let’s face it kids, those are some dated futuristic costumes and graphics, huh? – Space 1999 was more accurate) where Blackadder is Grand Admiral of the Universe or somesuch and Baldrick his weedy slave, dressed only in a leather posing pouch.

The only sight worse than Baldrick as a weedy slave dressed only in a leather posing pouch, is Blackadder himself dressed the same way. And this, we discover is how things turn out if he continues with his kind ways, prompting the revelation that “Bad guys have all the fun.” Problem solved, we’re back to Blackadder the Bastard in around 25 minutes – thank heavens for that. 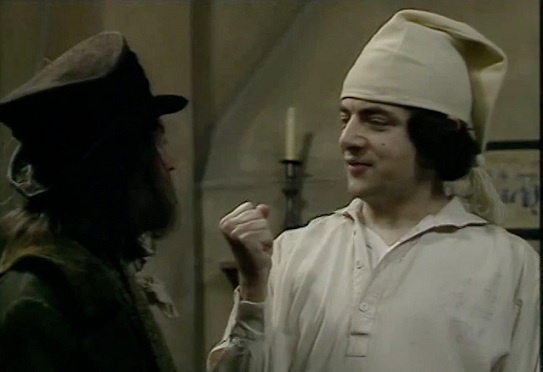 After punching Baldrick and generally being a swine, he insults the infuriating Mrs. Scratchit with the line of the episode:

Mrs. Scratchit: Ah, Mr. Ebenezer! I was wondering if you had perhaps a little present for me…? Or had found me a little fowl for Tiny Tom’s Christmas…?
Ebenezer Blackadder: I’ve always found you “foul,” Mrs. Scratchit – and more than a little!

If there’s one thing that us Brits do well, it’s the twist in the tale. This one of course being Blackadder faltering somewhat in his reception of the Queen (aka winner of the Round Britain Shortest Fattest Dumpiest Woman Competition) and Prince Albert (the victor of this year’s Stupidest Accent Award) who have come to reward him for his philanthropy by giving him fifty grand and a title. “Empress Oink” leaves very shortly after leaving Blackadder to rue his mistake of mistaken identity when Baldrick presents him with the Royal seal.

“Blackadder’s Christmas Carol” crams a lot into its 42 minutes and could quite easily been written as a feature length in itself. Cast members are thrust in and out of scenes a tad too quickly and a little more time and effort would have made this unbeatable.

But please…any budding set designers out there should take heed of the “future vision” scenes and whatever you do, try not to replicate them in any way. I know it’s a comedy, but sheesh!

Merry Christmas, everybody and if you have the odd bottle of Nurse McCready’s Surgical Bruise Lotion lying around, then you can join me in a toast to the super 2013 that’s just around the corner.

Tomorrow: It’s Christmas! Get off the internet.