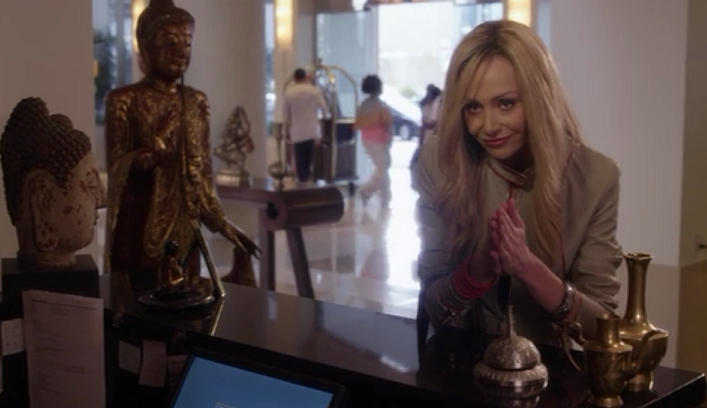 If you had told me before this season began that Lindsay’s episode would have been miles better than Tobias’s, I wouldn’t have believed you. That’s the case without question, though, and that says more about the bumbling “A New Start” than it does about anything “Indian Takers” does right.

I’ve already discussed my disappointment with the way the individual episodes of this season fail to fit together, but I think it’s worth mentioning that this disappointment could have been avoided entirely if the season didn’t want to fit together. If we had gotten a series of 15 isolated character sketches, we could have taken them at face value. Instead we have 15 components that struggle against themselves to form something bigger, and this reaching for narrative complexity ends up undermining its success.

In “Flight of the Phoenix” and “Borderline Personalities,” we had smaller stories that didn’t exactly close off by the episode’s end, but which progressed at least to natural breaking points. “Indian Takers” is the first of many episodes this season that just shows us a bunch of stuff happening and then suddenly ends because there’s nowhere left to take it.

In fact, it plays out like one of Tobias’s “Yes And…” improvisations that we see in the episode; desperate, flailing attempts to conjure a story from nothingness, which ends with hands being thrown up and the experiment abruptly stopped. I’d say that qualifies as thematic resonance but for that to be the case Hurwitz and co. would have had to have deliberately given us a disappointing episode, and I doubt that’s what happened.

I’m being hard on the episode, but the fact is that the first act or so holds a lot of promise. Lindsay fleeing to India to do some impulsive soul searching is a perfect setup for the flighty character (as is the fact that she only makes it 2/3 of the way through Eat, Pray, Love before running off, inspired), and Lindsay returning to Tobias after flying halfway around the world to get away from him is also in line with her personality and her history.

Unfortunately that’s only the first act. In an earlier episode of Arrested Development this might have been a B-plot, and Lindsay’s return would have been the end of the story, probably capped off by some unfortunate phrasing on Tobias’s part that suggests he wants to be buttfucked by a man. However this is season four, which for some reason I still can’t understand seems to think it needs longer episodes when it has so much less to say, and we have a lot of filler between this and the episode’s end.

There’s a lengthy detour with a Realtor — a welcome Ed Helms, whose cheerful on-screen presence overshadows some pretty lazy writing — another Lindsay and Tobias fight, and then the major development of the episode: a trip to the Method One Clinic.

Tobias misunderstanding the name of the organization is a nice gag, but we get mired there for a while, then get swept along with a junkie couple to a barter restaurant, where Lindsay and Tobias run off separately with the junkies, and then Lindsay has sex with the guy, and the guy says he has “face blindness” so that we can have some jokes about that, and then Lindsay is naked and an ostrich attacks her and an old woman calls her a slut. Cool story, bro.

That sort of thing might pass for a plot on a lot of shows nowadays, but on Arrested Development it’s glaringly sloppy. Lindsay’s soul-searching / bargain hunting in India should have been the focus of this one…instead it’s just a spark meant to kick her through the gauntlet of nonsense the episode really wants to show us — but can’t figure out why — before it ends. Yes and…yes and…yes and.

One of the other problems here is the same problem we had in “Borderline Personalities:” the new characters are simply too broad to care about. At least in “Borderline Personalities” we had Heart-Fire, whose joke actually had some genius to it…and Dr. Norman and China Garden don’t reveal themselves as irritatingly one-note until later in the season. Here we get Marky Bark (descended from Johnny Bark in season one*, because why not) and DeBrie, who punish us for being amused at the methadone / Method One misunderstanding by hanging around all season being annoying.

This is the kind of episode that could afford some narrative messiness in favor of payoff down the line, but these characters don’t really go anywhere. (Maria Bamford as DeBrie at least comes close, but we’ll discuss that in another episode.) Marky Bark’s face blindness offers a chuckle when he not only kicks open a bathroom door to tell the wrong woman he loves her but goes back to the bathroom to apologize, but that’s about it. Every time we return to it it’s the same joke, static, and the show hopes it will somehow just come across as funnier the next time. It never does.

I’m also disappointed by the fact that Lindsay actually has sex with him. In earlier “seeing other people” plots, both Lindsay and Tobias were failures, and naturally gravitated back toward each other. This was both more satisfying — we, as viewers, do want them together — and funnier, especially because the writers had to come up with cogent reasons that eligible men wouldn’t want to be with Lindsay. It might have been expected, but it forced the writers to work for the payoff, and their hard work showed. Especially when compared to this, in which they just have sex and that’s that. That’s not as rewarding, and it takes a lot less effort from all sides. (So to speak…)

In earlier seasons I liked that Lindsay and Tobias were a failure as a couple, but also proved themselves to be failures apart as well. It was cute, and it was interesting. Now, suddenly, they both do quite well apart (spoiler warning), and that’s another step backward in a season that’s been full of them.

Oh well. I’ll have more to say in the Tobias episode for sure, but I do want to end on a big nitpick about the India stuff. (You didn’t think I’d just let myself be satisfied with something I like, did you?)

The casual racism in the first episode involved blacks and Muslims, in episode two we got our hooks in the Asians, and now we’re picking on the Indians. Some of it plays well enough when they’re reacting to Lindsay and playing up the stereotype in order to swindle her, but this episode provides some pretty concrete evidence that it’s not the characters being racist…it’s the show.

When Lindsay asks about a swimming pool, the hotel receptionist tells her, “It’s hard to tell because there are so many people in it, but yes it is a pool.” Later the narrator makes a similar joke about the ocean. If it were Lindsay saying these things (and there’s no reason it shouldn’t have been) it would have told us something about the character and we could have laughed. Instead, it tells us something about the show, which wants us to laugh at them, and that’s problematic. There’s also the clumsy dialogue on the bus about how much worse it would be to hit a cow than a tourist, and it just feels like lazy, embarrassing standup repurposed as a sitcom script. This isn’t funny…it’s just putting a stereotype on display and having it dance for us. Arrested Development, you’re better than this.

Oh well. Up next is another Michael episode. If anyone can get this mess in order, it’s him.

Episode 3: “Indian Takers”
Central Character: Lindsay
Other Family Appearances: Lucille, Tobias, Maeby
Most Clumsy Reference to Original Run: “I was thinking of Mike, the hot seaman.”
Scene That Most Needed Tightening: The exchange with the Realtor, in which the audience grasps the joke in around three seconds, but is stuck listening to it over and over again for the next several minutes. Lindsay and Tobias shouting at each other through their cavernous home is a close second.
Best Line / Exchange:

TOBIAS: It shouldn’t affect our area. He’s over by where the fountain is.

—–
* Am I the only one who doesn’t like the SHOWSTEALER PRO watermark over the old footage? I guess the joke only really lands if you pirated the first three seasons. Otherwise all it does is prevent the new footage from flowing naturally from the old and makes the whole thing feel even more artificial. That’s a notable step down from the brilliant retreads and retellings we got in the original run.