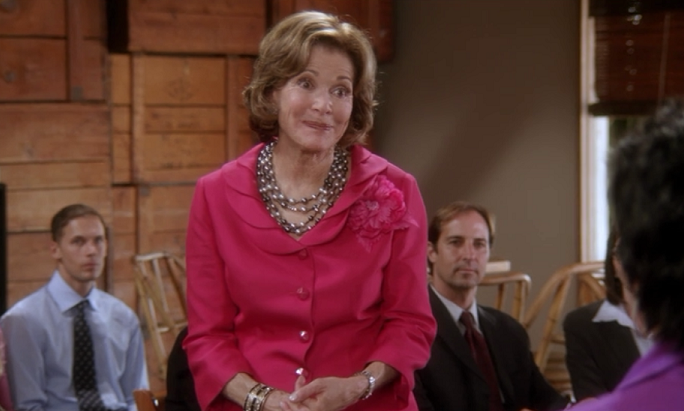 While “Queen B.” might not be the worst episode of season four, it’s certainly the most disappointing. A character like Lucille doesn’t come along very often; she’s entertaining by default. A glare or a glower is enough to get a laugh, and she has a brilliant way of delivering her lines that turns the most innocuous sentiment into a cutting insult. She’s a great character in a show full of great characters, and has always been one of my favorites.

So of course they don’t know what to do with her, and mash her into the fuckin’ Fantastic Four musical.

Did we really need three episodes about that stupid thing? I don’t think the lack of direction in this season is any clearer than when we spend 1/5 of our time circling back to this god forsaken plot thread, and the fact that we now rope Lucille — unquestionably the Bluth least likely to give a shit — into the thing just shows us once again that they have no idea who their characters are.

Of course it’s probably worth mentioning that the offensive stupidity of the Fantastic Four stuff is familiar by now, freeing us up to be more concerned with the Dragon Lady Asian Mafia Reality Show garbage that fills up the beginning of the episode.

The show veers yet again into extended racism for the sake of a laugh, with a collection of shrill, vindictive Chinese women who run the prison, initiate Lucille into their gang, which results in Lucille teaching them how to smoke indoors, and then they enter into some agreement about the wall which is something else happening this season, and then they try to stab her with some noodles and Lucille talks to the camera men.

This isn’t funny, and this isn’t good writing. When you’re writing well it doesn’t matter what happens; you can have your characters at a table, on a couch, in an elevator, anywhere, and it’s funny. That’s all we want as viewers: interaction. We want to see characters bouncing off of each other in interesting ways. That’s absorbing. That’s quotable. That’s good.

In season four we have our characters behaving like pinballs. They’re not bouncing off of other characters, they’re bouncing off of things and events. Every episode is a collection of occurrences that may or may not have anything to do with anything else, and when you start treating all of your characters in this uniform way, you end up with uniform results, which is why Lucille Bluth of all people ends up in a musical about the Fantastic Four.

The plot tries to come up with a reason to put her there — she goes to trial, then to prison, then to rehab, and can get out of rehab early if she participates, which seems like a chain of logistics long enough for someone on the writing staff to realize this might not be the most natural course for her character to take — but ultimately the idea falls flat.

She auditions for the show with a song of her own creation, something about her kids not liking her, which is clumsy and on-the-nose enough to infuriate the Robot Devil. But the worst part is that I don’t believe Lucille would write her own song for this.

Maybe if it was funny I wouldn’t care, but Lucille standing up and setting her feelings to music? No matter how clumsily she handles it, that’s not her. I might be able to picture her reprising her U.S.O. performance of “Downtown,” but I’m sorry, a woman who just wants to get out of rehab sooner isn’t going to be writing a song for a musical about the Fantastic Four. Especially not this woman.

The episode does feature the return of Gene Parmesan though, who gets one of the biggest laughs of the season just by turning up, and it really goes a long way toward highlighting just how poor the new supporting characters this season are. We’re already sick of China Garden and Marky, but we’re thrilled when Gene Parmesan shows up for twenty seconds.

It also, as one of my commenters pointed out, reinstalls Tobias as a therapist, which had been an untapped vein of comedy for the character all along.

Unfortunately, the pinball wizard approach of season four means that just gives him an excuse to work on the Fantastic Four musical as well, and the therapy vein remains almost entirely untapped.

Oh, and we find out Lucille 2 is dead, or something, because there’s blood on the staircar and she’s missing. I’ll probably talk more about that in the Buster episode, because god knows I won’t have much else to say there.

I’d have more to say, but it would probably just be me writing, “How the hell did they forget how to write for Lucille?!” over and over again. And I’ll spare you having to scroll through that.

Episode 10: “Queen B.”
Central Character: Lucille
Other Family Appearances: Buster, George Sr., Michael, GOB, Tobias
Most Clumsy Reference to Original Run: Dead dove, which is not to be eaten.
Scene That Most Needed Tightening: Lucille and Lucille 2 bickering at the trial would have been much funnier if we could have just cut to it for a quick peek, like the argument at Klimpy’s in the original run. Instead we get a long, unbreaking look at it, and can see clearly that the actual escalation can never be as funny as we’d imagine it to be.
Best Line / Exchange:

LUCILLE: Where the hell did we go wrong with that kid?
GEORGE SR.: Probably where we went wrong with the others, I don’t know.