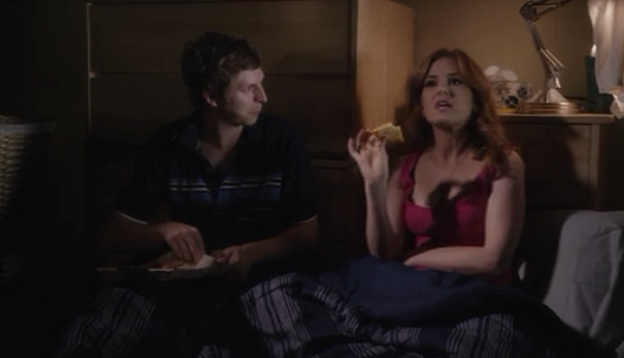 Serving as the final installment of a 15-episode swirl of twists, plot-threads and exciting glimpses of…oh, to hell with it. I can’t even finish that sentence as a joke.

Arrested Development season four was a mess. “Blockheads” is a mess. It might have seemed like somewhat less of a mess if it wasn’t the final episode, but as it stands its almost overt refusal to offer closure to even one of this season’s frustratingly aimless storylines makes it seem that much worse.

There’s not much plot going on here, aside from the fact that Michael and George Michael realize they’re dating the same woman (which happens, of course, in the very last scene, because if we saw anything beyond that it might have taken some narrative effort), so I guess I might as well talk about Isla Fisher — who I’m not sure I’ve even mentioned yet — and the season as a whole.

Talking about Isla Fisher will be easy, because there’s not much to say. Like all of the characters invented for season four, there’s nothing to hers. At least in this case, however, they don’t attempt to mask “nothing” with cartoony shenanigans. Come to think of it, I guess they figured the fact that she’s an exceptionally beautiful woman would hide it enough…and while that’s not particularly good writing it does at least manage to avoid being particularly bad, which qualifies as an accomplishment here.

When compared to Michael’s previous romantic interests, though, it’s immensely lazy. We’ve seen him canoodling with Charlize Theron, Jill Ritchie, Christine Taylor, Heather Graham and Julia Louis-Dreyfus* and while they’re all very attractive women, that never stood in the way of developing them as characters. They all managed to still feel human, with quirks and charms of their own. Isla Fisher as Rebel Alley is just an attractive red-head. Oh, and she wants men more when they are mean to her, which is a character trait that would have been seen as embarrassingly sexist for a writing staff back in 1958. In 2013 it just feels like the setup to an easy subversion that never comes.

They toy with her hard-partying lifestyle a bit, but it never really lands. Every so often we cut to her having to appear in a PSA, and those are for the most part pretty funny, but it would be nice if this had something to do with her character rather than serving as an irrelevant running gag.

So, yeah. Better than China Garden, Dr. Norman and the Asian Women Housewife Reality Show Prisoner Shits, not as good as Heart-Fire or Kristen Wiig as young Lucille.

And that’s it. George Michael learns that his father has been porking his girlfriend (or vice versa) and punches him in the face, then the credits roll. The punch is a nice, shocking moment, but in retrospect it pales in comparison to Maeby calling her mother a whore. Maybe it’s just me, but that felt like a much “truer” punch in the face…it’s a word that would hurt Lindsay no matter how accurate it was, and it’s something that Maeby’s thought for a long time and has only now brought herself to articulate. In comparison, the physical punch between George Michael and his father was just a reaction…a heated moment with a physical, isolated punctuation. It’s not bad, but there’s not as much to it.

It also works better in Maeby’s case because it’s not the end of anybody’s episode or storyline. In George Michael’s case it’s both, which doesn’t leave any room to do anything with it. Maeby’s punch to the face is metaphorical, but it lingers, and it stings. George Michael’s just leads into some silly song playing over the credits. Ho hum.

I guess we can also talk about how hilarious season four thinks it is when adults have sex with minors, as it’s a major component of three stories this season (Tobais, Maeby and George Michael) and a tangential one for at least two others (as GOB and Michael supply the homes for the sex offenders).

I think it worked in the Maeby episode, for the reasons I outlined there (and also the fact that Alia Shawkat can evidently sell anything you give her), and I at least see what they were trying to do with Tobias, but with George Michael it feels exceptionally cheap, and watching a pile of shirtless men tackle him on the lawn to passively grope his genitals isn’t awkwardly funny…it’s just awkward.

As much as this season did right, I’m going to remember it most for the one thing it did that I never expected: it took away all desire I have to see season five.

I no longer care about the show. At the end of season three I felt sad that there was still obviously so much more for these characters to do. Now, however, that I actually have a season four I’m sad because the things the characters are doing are things I have no interest in watching them do.

Because nothing was resolved in season four — and we spent 15 episodes wrapping up a relatively clean ending in season three — we can get a pretty good idea of the kinds of things season five will be about, and I don’t care to see any of them.

We’ll learn more about the wall, which was apparently built but who knows. We’ll talk more about the land it’s built on, and who it belongs to. We’ll check in with Marky Bark and his face blindness, and what he’s up to now that he blew up a boat. We’ll hear something about DeBrie. Tobias is a sex offender and we’ll have to talk more about his Fantastic Four play. We’ll have more tedious back and forth with GOB and Tony Wonder. Sally Sitwell will continue her transformation into Snidely Whiplash. Buster is going to jail, or something, where his robot hand will do hilarious things in the shower. George Sr. has low testosterone and dresses like a woman. Michael and George Michael will have to deal with the fact that they’ve both been dating Generic Woman #4. Maeby is also a sex offender. Lucille 2 is dead or missing or who cares. Herbert Love is in a coma. Lindsay may or may not run in Love’s place, and Sally may or may not run in Lucille 2’s place. Sudden Valley is a haven for kiddie rapists. And so on and so on and so on, and as the pile grows, I realize more and more that…

None of this matters to me, but with 15 episodes of dancing around and through all of this crap, I can tell it’s supposed to. I came out of the other end just thankful that it was over. And I guess there’s going to be a season five, and I guess that’s a good thing for the people who get their paychecks from this show, but it’s not something I’m even interested in watching.

As I said before, if this show didn’t have the Arrested Development brand on it, I never would have sat through the entire thing. But I have, and the last thing I want is to see more of it.

Maybe season five will be brilliant. I don’t know. Going by what a lot of other sites are writing about season four, this is supposed to be brilliant too.

Maybe it’s just me. Maybe I’m a stick in the mud. Maybe Tobias in a Thing costume and Marky Bark covered in blue paint and China Garden screaming in the desert are right up there with anything else the show has ever done, and I’m just stubbornly refusing to admit it.

Who knows. All I know is that I no longer care. If it took 15 episodes to explain what happened after the Queen Mary, it’ll probably take 150 to dig us back out of this mess. And frankly, I just don’t have the patience for that.

Arrested Development made this bed. It’s not my responsibility to lie in it.

Forgive me for sitting the next one out.

—-
* Maybe not everyone’s cup of tea, I know, but I’d definitely say she’s a very attractive woman. Also, in the course of double-checking the spelling of her name I learned she’s 52 years old. Fifty-two! Puttin’ women half her age to shame. (Call me, Julia.)