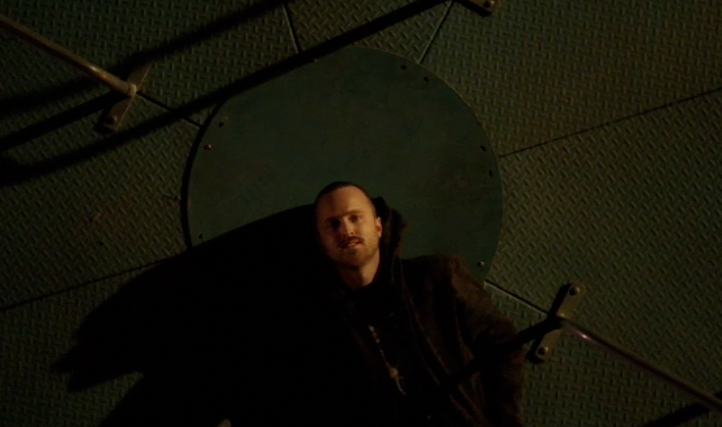 I can review this episode using only five words: “Now that’s more like it.”

Or, wait. Maybe I’ll go with “I fucking love you, Marie.”

Either of those I think would say it all…but, for old time’s sake, let’s pretend I have more to say BECAUSE OF COURSE I DO.

My issue with “Blood Money” was mainly down to pacing…but really the problem was that I didn’t put enough trust in Vince Gilligan and his writing staff. I’m sure I can count on one hand how many times a perceived flaw in a television episode was actually down to me watching it completely and totally wrong but…I confess…that’s exactly what happened here.

It’s not entirely my fault…Gilligan set the trap. I was just dumb enough to walk into it.

The first half of season five ended with Hank finding Walt’s incriminating copy of Leaves of Grass, which seemed like it would set the mad scramble toward the finish line into motion. I expected, more or less, that the first episode of the back half would be the metaphorical starter’s pistol. Then it didn’t come. As I felt unfulfilled.

Because it came. I was just listening for the wrong sound.

When “Blood Money” ended with Walt’s “tread lightly” admonition to Hank, I felt almost cheated. It seemed like such an artificial move by the writers…a desperate attempt to give us one memorable late-game play in the style of “I am the one who knocks,” or even “I’m in the empire business.” It was a hollow gesture, and I sensed that.

It was indeed a desperate attempt to mimic more powerful times. It was Walter’s desperate attempt. He remembers his glory days as well as we do. He emptily tried to stir up some of that old mojo…but it didn’t quite get there. Yes, as I mentioned in my review of that episode, it felt like a lot of work to shift us back into neutral. But it wasn’t the writing staff shifting back. It was the character.

“Buried” sees Walter leaving the garage right after that clumsy attempt at bad-assery…and he falls apart instantly. He peels out in his car only to pull over still in sight of Hank’s house, and place a panicked — and unsuccessful — call to his wife. Walter’s made his power play, and already the wheels have come off. He’s a deeply idiotic man.

This episode works a lot better in isolation, I feel, than its predecessor…right down to its breaking point, which won’t rely on a post-episode tonal shift the way “Blood Money” did. Nope. Hank has Jesse. And Jesse…well, Jesse’s broken. Things can go either way. Skyler might have chosen not to turn on Walt — more on that to come, of course — but Jesse just might.

Which is something that…well, I can’t put it into words very easily, so I’ll just have to say that it’s showing me something I’ve been appreciating about Breaking Bad without even realizing it: it’s made me, gradually, want Walter dead.

When the show started, it was easy to be on his side. Yes, of course, he was doing something very stupid. But was there anybody out there who didn’t want him to triumph in some way? Even if that triumph was something as small as realizing the idiocy of his plan and getting out alive?

There was an initial humanity to Walter White, which we could see even as he did terrible things. But, slowly, the balance shifted, and it was the terribleness we were seeing primarily, with the humanity only rarely glimpsed. I don’t know exactly when it “turned” completely for me, but I’ve gone from rooting for the man to rooting for his death. And that’s the fruit of fantastic storytelling.

Getting back to the episode, Hank’s case — as many have suspected — still hinges on conjecture. He knows it was Walt…and that’s great. But he still can’t prove it. Skyler, Hank correctly supposes, can fill in the blanks he needs, and that scene between the two of them in the diner is a fucking masterpiece of selfish tension. Each of them has so much invested in the outcome of this case, and each of them even has the same end goal in mind (that the rest of the family is kept safe). Yet they are each driven by their pride to not help the other. Skyler won’t fill in the blanks…Hank won’t let her get a lawyer. Two people want the same thing for the same reason…but are each madly protective about it in conflicting ways. It’s moments like that that I’m going to miss most of all, because I can’t think of any other shows on the air that could pull that off believably.

I also loved the mirrored moment of Marie slapping Skyler, which dovetails nicely with her husband slugging Skyler’s husband in the previous episode. The difference, I think, is that in “Blood Money” I was all but screaming for Hank to hit him…which he then did. Here, the slap was totally unexpected…but not at all unearned. Poor Marie having to recount the events of the past year in reverse to figure out how long Skyler’s known…getting as far as Hank getting shot…it was heartbreaking, and while I wouldn’t have said it before that scene I’m absolutely able to say it now: Skyler deserved that crack every bit as much as Walt did.

Oh, and I just thought of a joke: 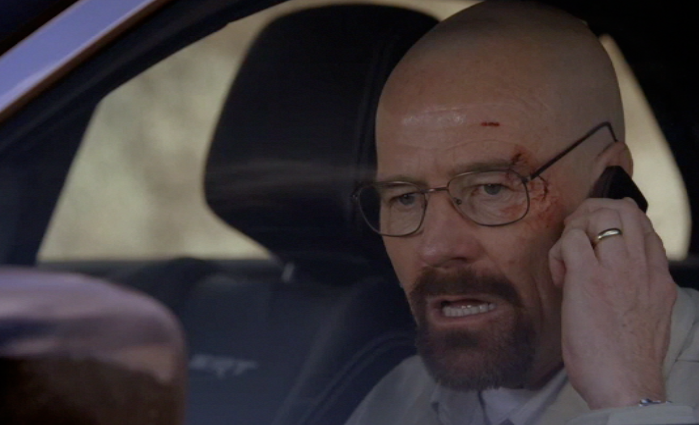 Anyway, I like that moment, mainly because Marie’s obliviousness has always been played for comedy, whereas Hank’s has largely been played for drama and suspense. This isn’t a problem…this is A Good Thing. Because it gives the audience a moment like this…when the rug is pulled out, and you realize that all of this so-called comedy was really, through the clever switching-out of a lens, the slow-motion dismantling of this woman’s life. Marie had and has every bit as much invested in this tragedy as anybody else. She might have come off as a TV ditz…but beneath it she was a real person, with a real husband, and came really close to losing the man she loved most.

Elsewhere Lydia and Todd and Todd’s Nazi uncle go apeshit. I’m not quite sure what to make of this scene yet — though I have my suspicions — but I would absolutely hold it up as evidence of just how richly composed this world is. Even when we don’t quite know what’s going on, we have the sense that we’re in capable hands. And I can’t say enough good about what Laura Fraser does with this late-coming character.

Seriously, rewatch that scene. Every little gesture and detail and line reading suggests more about Lydia than we’ve actually yet seen. The way she fixes her hair in the rear view mirror after her blindfold is removed. The way she arrives over-dressed to a bloodbath. The way her heels sink into the sand but she doesn’t take off her shoes. This is great stuff.

I don’t know. Details like that are probably what I’m going to remember when all’s said and done. For good reason most will think back on Gus’s demise, on Mike’s “half-measures” speech, on Skyler in the pool.

But I’m going to remember things like Lydia’s heels sinking in the sand.

Because any show can do the big moments.

Not every show can make you look for the little ones.