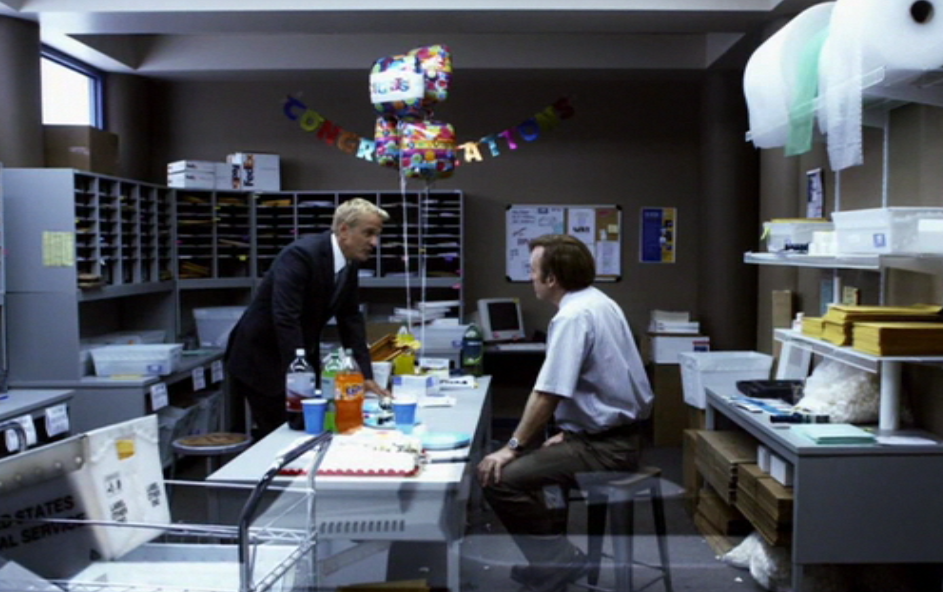 Ultimately, what we all want is to be accepted.

Socially, professionally, romantically, sexually, emotionally, intellectually, artistically…the specifics differ from person to person, but everything we do, everything that drives us, everything that gets us out of bed in the morning and keeps us limping through this confusing, frustrating, impossible dance of civilization comes down to a desire, in some way, in any way, to fit.

Jimmy McGill is no exception. And that’s heartbreaking.

On Breaking Bad, Saul Goodman filled the role of comic relief. It made sense there, and eventually became a necessary component of the show, because Walt’s story — Breaking Bad‘s central journey — was one of continuous unfolding tragedy. A character like Saul needed to be outsized and impossible to miss, because as the show continued and became weightier, we needed something on the other side to keep it from tipping into irredeemable darkness. And, so, he was there, the profiteering “circus clown” in Walter’s life.

In Better Call Saul, though, there is no Walt. Jimmy McGill is a jester without a court. In a tremendously sad reveal over the course of the past seven episodes, we’ve learned that this change in context means nothing: Jimmy’s the comic relief in his own story, too.

The opening sequence of “RICO” walks us through one doomed and devastating attempt of Jimmy’s to fit in: passing the bar. And while we never hesitated to laugh at any of Saul’s bunglings or misfortunes, could we laugh at Jimmy’s here? I certainly couldn’t. It’s sad enough just learning that Hamlin and Co. know Jimmy as the guy who used to work in their mailroom, but his failed attempt to leave it behind him is genuinely painful.

He tries to make small talk with his more important colleagues, but they just want their mail. An unanswered “What’s up?” hangs in the air as Jimmy wheels his cart further along. Kim, unsurprisingly, is thrilled for him. Chuck — his more respectable, more successful, more intelligent older brother — is dumbfounded. If he’s proud at all it’s eclipsed by the shock he feels. More likely, he sees this as an act of supreme idiocy…his younger brother — for whom he no doubt pulled strings just to get him a job in the mailroom — getting mindlessly fleeced over the past several years by a correspondence school.

Remember when Skyler inspected Saul’s degree from the University of American Samoa? It was a funny, Lionel Hutz-type gag. Here, as we learn its origin, it’s a brick to the heart.

It all culminates in a very minor celebration for Jimmy. Some cake and soda in whatever empty space they can find around the copier. His friends — Kim amongst them — are sincere in their well-wishes. Hamlin is not. The fact that Jimmy is told he will not be hired on as a lawyer is not surprising, but the fact that Hamlin knowingly impedes on the celebration shifts the news from “sound business decision” to “overt fuck-you.” It was several years of hard work, expense, and persevering in the face of failure…and it came to nothing. Hamlin helps himself to a slice of cake.

No hard feelings, right? Do you want the door open or closed?

As last week’s episode ended, this week’s opens: Jimmy McGill, one more door closing on him.

The struggle for acceptance defines — and unintentionally ignites — “RICO.” It’s why Chuck offering his hand and Jimmy leaning in for a hug — however many years after Jimmy passed the bar — means something deeper than the warmth of the image. Now, here, against all odds, Jimmy McGill is in a position to do some good. And to do it the right way.

It’s also why Kim sticks by Jimmy…this mailroom buffoon that nobody, aside from her apparently, can bring themselves to take seriously. It’s not because she believes in him, exactly…she’s second-guessed him too often for that, and rightly so…but because he accepts her on a level that other people do not.

In “RICO” we see her moving her belongings back into her office, which is a good reminder of just how quickly she was moved out of it for losing a client through no fault of her own. She’s a good lawyer, and she did her job the way it needed to be done. Circumstances, temporarily, worked against her, and she was ceremoniously stripped of her rank. However much she might mean to Hamlin, Hamlin & McGill, she’s not accepted. Whatever possibilities for promotion they may dangle in front of her, she’ll always be kept at arm’s length.

By contrast, when Jimmy offered her the corner office in his suite, she (and we) knew he meant it. It was as good as hers. No doubling back, no empty promises. He meant every word he said. And yet…he’s a nobody. Kim couldn’t accept the offer, because what kind of future could this man have? With him, she could have acceptance. With Hamlin, she could have significance. They both sound like nice options, but we know she really could have only made one choice. Nobody hands their future over to a clown.

And acceptance is what caused Jimmy to specialize in elder law. It’s not just because the elderly are the only ones who seem to pay him — though that’s undoubtedly part of it — it’s the fact that he can actually help them.

They like him. They recognize his suit. They enjoy his company. They spend their days watching the kinds of old movies Jimmy himself is always referencing. (References which, it should be noted, other characters his own age never seem to recognize.)

In fact, “RICO” itself is built on the foundation of Jimmy doing good. Helping an old woman prepare her will is one thing…taking a stand against the systematic fleecing of the residents of her assisted living facility is another. And while the latter has a much larger payoff, it’s also the case that will help the most people.

He stumbled across the scheme not while chasing ambulances, but while treating an old lady with respect. He listened to her…actually heard what she had to say. This is why he was able to piece something together that nobody else could: with all the money coming her way, why couldn’t she afford to pay full price for his services?

As far as she’s concerned, there’s a perfectly rational explanation…but Jimmy takes the time to dig, just to see what he can find.

Jimmy McGill has value. There’s a reason that he could, theoretically, make something of himself, and it’s the scene that finds him pawing through a dumpster in the middle of the night. A few episodes ago when he found the Kettlemens hiding in the woods, he offered his services and asked them a question: who found them? Was it Hamlin? Or was it McGill? One of these lawyers looked the part, but the other was willing to get himself dirty. Which is more valuable?

Again, there’s only one choice. Nobody hands their future over to a clown.

Jimmy might display fits of competence — including two that baffle Chuck this week — but he’s the comic relief, and everybody knows it. It holds him back. Or, more specifically, it hedges him into one kind of role.

Whatever values and abilities and usefulness he might have inside, society has already decided who he is. He can work as long and as hard as he likes to force the world to view him differently, or he can give up and conform to the vision of him that they already have.

And yet again, there’s only one choice.

If Better Call Saul is an extended reminiscence of the futureless manager of a Nebraskan Cinnebon, it’s an inherently tragic one. After all, that man isn’t reflecting on where it all went wrong; he’s reflecting on the fact that he never had a future to begin with.

Close the door, if you don’t mind. I need to be alone with my thoughts.