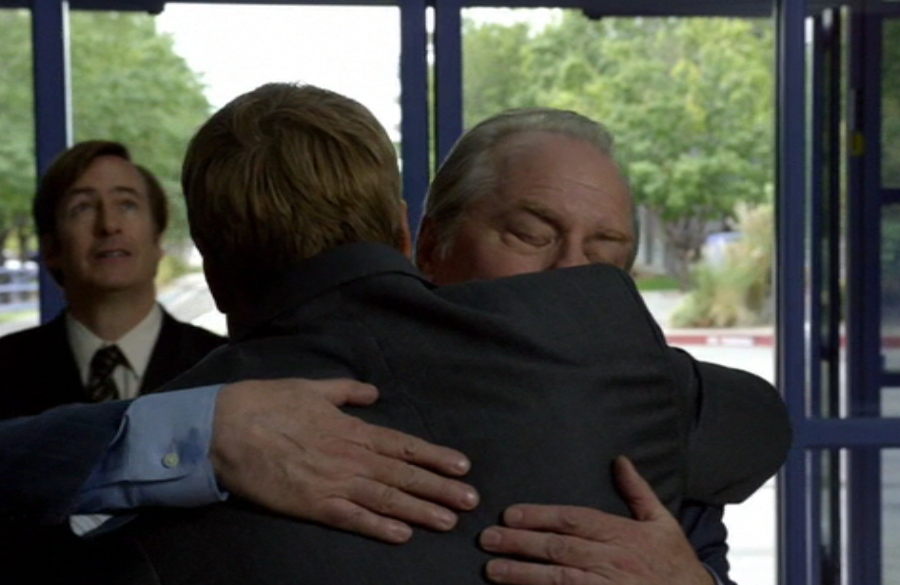 Before this show premiered, I had a lot of ideas about what it could be. “Heartbreaking” wasn’t one of them, but Jesus Christ would I be hard pressed to describe Better Call Saul without using that word now.

When the possibility of a spinoff was first floated, the idea seemed to be that it would be a comedy. Technically, it still is, but it’s one that’s very much in the mold of Breaking Bad. Though the laughs may be more frequent, they’re still just the relief between tragedies.

There’s only one more episode of the season to go, so speaking about its statement as a whole isn’t completely out of the question. If you were to ask me, I’d have to say that it’s telling us, on no uncertain terms, that Saul used to be a good lawyer.

That statement requires some qualification, as the Saul Goodman who represented Walter White was good at his job, good at protecting his clients, and good at keeping legal entanglements to an absolute minimum. But as Mike says this week about criminals, you can still be a good guy or a bad guy. What you do is one thing…what’s in your heart is another.

Saul Goodman was an effective lawyer. Jimmy McGill was a good one.

The path to becoming Saul Goodman is one that doesn’t seduce Jimmy by being more lucrative…it’s simply the only path available that doesn’t return him to square one. In “Pimento,” we see just how harsh the world can — and will — be to this man. Last week’s congratulatory “fuck you” from Howard Hamlin was indeed painful. This week’s “fuck you” from Jimmy’s own brother was downright devastating.

Kim plays a very important role in this show, even if it’s almost always passive: she’s a centered character. She’s emotional and rational in fairly equal measure, at least so far. She knows that Chuck’s condition is all in his head, but she also knows better than to shatter his perceptions. And she knows that Jimmy is flamboyant goofball, but she also knows that there’s a lot of good in him.

For her to declare to her boss, as she does in this episode, that Jimmy McGill is a good lawyer, we know that that’s the truth. She wouldn’t, and couldn’t, have said it otherwise. What she’s doing, from a narrative perspective, is orienting the audience. If you’re starting to think that Jimmy McGill was a good lawyer, she tells us, that’s okay; you’re right. And if you somehow made it this far in the season without reaching that conclusion, you need to think again.

It’s important that we recognize Jimmy’s position. For the mailroom dodo to be slapped down, well, that gives us one kind of sorrow. For an up-and-coming young attorney who surprises his social betters with his competence…well, being slapped down is more than just an insult. It’s a promise that they will not, under any circumstances, let him get to where they are. He is, in a word, fucked. And they will see to it that he stays fucked, because that’s his role in the world. He shares a surname with his brother, but he cannot be allowed to become his equal.

And that’s a whole other kind of sorrow. Because Jimmy McGill was allowed the view from the mountaintop. To be told “you will never have this” before you even begin is disheartening. To be told the same thing after you’ve already caught a glimpse, tasted it, believed in yourself, convinced yourself that this was as good as yours…that’s fatal.

Jimmy has a heart, and he has a conscience. He has pride that he’s very likely feeling now for the first time, and it runs him directly into a brick wall…not even one of his own making. Had he been responsible for the way he was treated at HHM, there’d be a kind of poetic justice. Instead, he’s guilty only of not being one of them. There’s no justice at all to that, and there never will be. Sorry Jimmy. Let’s revisit the issue in six months.

The reception of the McGill brothers as they enter the law firm says everything without saying a word. A round of applause for Chuck, who returns (briefly) from a sabbatical brought on by an imaginary medical condition. He gets a hug. He makes smalltalk. People are happy to see him, and to be in his company.

Jimmy, on the other hand, is ignored. Left behind. Nobody even helps him with the boxes. Nobody apart from Kim, anyway…

The pivot that Chuck takes in this episode (is there a space-blanket under that turncoat, Chuck?) is brutal. It relies on us knowing how much Jimmy has helped him, how far out of his way he’s gone for him, from buying groceries to keeping him company to running to the hospital to unplug the machinery in his room. (Okay, admittedly that sounds horrible when you take it out of context…) And it’s reinforced all the way through this episode, with Jimmy bringing Chuck outside, reminding him of simple pleasures like fresh air and the grass between your toes. It’s Jimmy building his confidence. It’s Jimmy bringing Chuck back to life.

And so for Chuck to turn around and knife him, it’s more than just a shitty thing to do; it’s a character-defining moment for the man who would be Goodman.

It’s also a painfully necessary moment, sold completely by Bob Odenkirk and Michael McKean, keeping us clear of any morally “correct” answer. I think it’s safe to say that most viewers will come down on Jimmy’s side, but the truth is hazier than that.

You can be a good man, or a bad man. (Or, perhaps, a good man or a Goodman.) But what was the good option, and what was the bad? It’s wrong to double-cross your brother, but isn’t it also right to prevent an unskilled attorney from meddling with clients that he could potentially hurt? Which matters more? One matters on the personal level and the other on the societal level. Which is more important? Which will be remembered? One is an actual wrongdoing for the sake of preventing the other hypothetical wrongdoing. Should that be taken into account? Jimmy had a long, dark night of the soul when considering what to say to Chuck. Chuck, by contrast, slept soundly, and woke up with a whistle on his lips. Somebody had to get hurt…who ended up regretting that fact?

And we haven’t even talked about Mike’s plot, which sees him working a protection gig for a nebbish drug dealer. The man is a sort of alternate universe Walter White (dealing, notably, with a member of Tuco’s gang). It provides us with an Action Mike moment for the highlight reel and also an impressively quiet meditation on what it means to be good, and what it means to be bad.

Mike’s story doesn’t tie into Jimmy’s in any direct way (though his observation that Nacho doesn’t want Tuco finding out that he’s doing deals behind his back may well explain why he doesn’t make it to Breaking Bad…), and that’s okay. For now he’s the protagonist of a concurrent story that comments on the main one, even if it so far has only rarely intersected it.

There’s so much about this show that I haven’t even been able to get to in these reviews. For that reason, I’ll do a full Season One Review after next week’s final episode review. But for now, I do want to say that the distance the show is maintaining between Jimmy and Mike is wonderful. “Five-O” saw our favorite geriatric assassin spilling his guts…but it wasn’t to Jimmy. As vulnerable as he appeared to us, he’s still a mysterious and frightening figure to our hero. And that leaves room to explore a really interesting dynamic.

They never have to bond. They never even have to achieve a kind of respect. We get to learn about both Mike and Jimmy, as neither of them learn about each other.

They can continue to serve as uniquely ridiculous figures in each other’s lives. And they’ll both deal with their own personal tragedies in very different but very compatible ways, shifting into each other’s circles without ever having an understanding of why.

It’s a shame. They have more in common than they think.