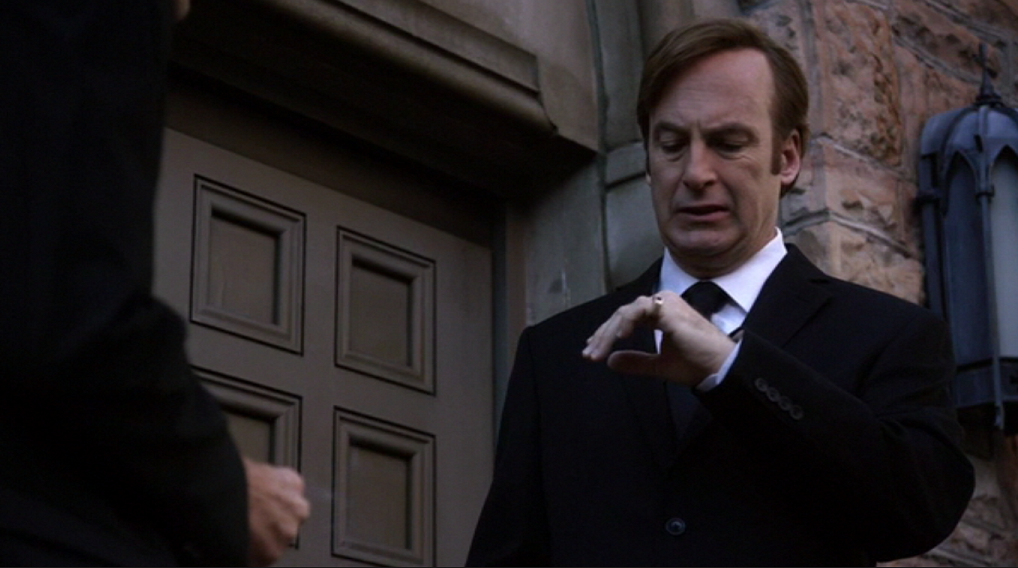 I went back and forth about whether to review “Marco” on schedule. Something about it seemed to call out for more consideration than I could give it after only one viewing. So I decided to wait…and the next day, I found out that my grandmother passed away. Jimmy’s loss of an important person in his life overlapped with my own. By no means am I suggesting that this provided me with any useful insight…it was an interesting thing to have happened, and that was about it.

And that’s about what I can say about “Marco” as a whole, after much reflection. Closing off an extremely promising first season, “Marco” feels like a significant letdown. Not just on its own merits, but in terms of where we’ll be when we return for season two.

It’s not a bad episode of television by any means, but with the incredible strength of the previous seven episodes behind it (I still hold that the pilot was relatively weak), “Marco” feels…well, dead. And being as it contains Jimmy’s most emotional journey so far, a lot of answers about his past, and “the moment” when he decides to become the shyster we all know and love (more on that presently), that’s odd. “Marco” isn’t running in place. It’s not playing for time. It’s an important episode. And yet it feels so trivial.

It’s still hard for me to figure out exactly why “Marco” doesn’t work. So many excellent pieces are there, but it feels as though it lacks cohesion. Which means that as down as I am on it as a whole, I can definitely spend a lot of time rattling off the things I really liked. And then, probably, undermining them, because I’m a miserable old bastard.

For starters, there’s the most obvious one: Jimmy’s bingo night meltdown. Odenkirk delivers this masterfully, swinging from playful to frustrated to desperate as a roomful of people bear witness to something they’ll never be able to explain. It’s a great chance for the actor to showcase his talents, and he absolutely rises to the occasion.

But, I have to admit, it plays too much like a “big moment.” It smacks of narrative effort. Through no fault of Odenkirk’s, the bingo speech feels like something the writing room would have been celebrating before it was even on paper. Compared to Mike’s “I broke my boy” speech from “Five-O,” which felt as though it grew organically from the tragic story we’d just watched, this felt a little artificial. It felt like a product of structure rather than one of discovery.

I like that the other major players in this show — Hamlin, Kim, Chuck, Mike — got sidelined. They popped in for a scene or two, nodded at the audience, and disappeared. That helped to sell both the importance of this episode — with its unapologetic focus on a single character’s journey — and the decided detachment of Jimmy himself. Reeling from the revelation at the end of “Pimento,” our main character throws up his hands and walks away. So, too, does the show itself.

However, this also places an undue weight on that character, asking him to shoulder — for the first time — a story entirely on his own. Odenkirk is up to the challenge. Jimmy McGill is up to the challenge. But I don’t think the writers were up to the challenge. Stripped of his familiar environment and supporting cast, our protagonist falters. Removing him from his comfort zone is a great way to show us unrealized aspects of his personality. By the end of “Marco,” though, they stay unrealized. And while the episode does a good job of letting us know right off the bat that we’re going to witness an important step in Jimmy’s (d)evolution, the artlessness of the ending makes it too difficult to appreciate any of the preceding subtlety.

I like the idea of Jimmy’s Lost Weekend relapse being a string of low-stakes cons. His relationship with Marco has a believable feeling of history behind it, and there’s a lot of very nice things done with the idea that these two hold each other back while feeling like they pull each other forward.

Then again, the cons aren’t particularly amusing. Only one (the wristwatch) has resonance, being as that’s the one we saw pulled off successfully in “Hero.” Ending their reunion with a sour reprise of that note is smart, but it’s not worth the unimpressive (and overly long) string of cons it takes to get us there. Breaking Bad left an impact with its willingness to deliberate, to work through its own logic openly, to pull us along step after agonizing step. There, however, it was in aid of escalating tension, and it worked very well. Here, in particular with the Kennedy half-dollar con, it just leaves the audience with too much room to wonder if it’s making good use of the time. We spend too long on simple concepts, making it feel as though Better Call Saul is padding out the clock. It’s not a pleasant feeling. (And the less said about the idiotic fact that the Nigerian Prince con is in their rotation the better.)

The scene outside the church was wonderful, with Kim’s phone call feeling like a tentative return to normalcy. She knows he’s doing something self-destructive, but she understands why. She knows he probably needs that. She doesn’t pry, and she spins a few plates on his behalf while he’s gone. It dovetails nicely with the scene in which Jimmy checks his messages and finds that he has clients — actual people for whom he is doing actual good, and who pay him actual money — waiting for him, and it feels like a nice moment of awakening for the character. She tells him that he stands a good chance of being hired on at another law firm…and hands us a great setup for where season two can go.

But ah, the Sickle! Jimmy comes home, stands in a parking lot for a little bit, then says “Fuck it, I’ll be a bad guy!” It’s an unconvincing reversal, to say the least, and it again feels so effortful. It’s a forced conclusion that speeds us toward Jimmy’s eventual transition into Saul, which works against the quiet, tragic slowness we’ve known all season. (Which has, I say confidently, worked in the show’s absolute favor.) He drives over to Mike’s perch, says everything short of “I’m Saul Goodman now. See you next season!” and drives off humming “Smoke on the Water.” With the high highs of the previous episodes still so strongly in mind, I find it hard to believe that that’s where we actually ended things.

“Marco” seems to take at least a step back for each step it takes forward, and I think it’s the ending that works most strongly against it. It’s too obvious, and it reduces a journey (I keep using that word, because I want it to be true) to a snap decision.

A far more intriguing end to season one would have been Jimmy getting hired on at that firm. He could spend “Marco” doing largely the same things, coming to largely the same conclusion as he comes outside of that church. He decides that he can do this, and sets out to make a name for himself at a reputable firm.

We already know what he becomes. The fun, I’d have thought, would be in stringing us along. Stretching it out. Working him through various ups and downs, false promises and pyrrhic victories, which, eventually, break him.

Everyone involved with the show is talented enough to pull that off. And they may well still pull it off. But “Marco” ends in the last place I’d want it to end: being comfortably obvious.

I still owe you all a season one review. And don’t worry…I’ll have plenty to say there as well. Thanks for reading, and thanks for your patience.