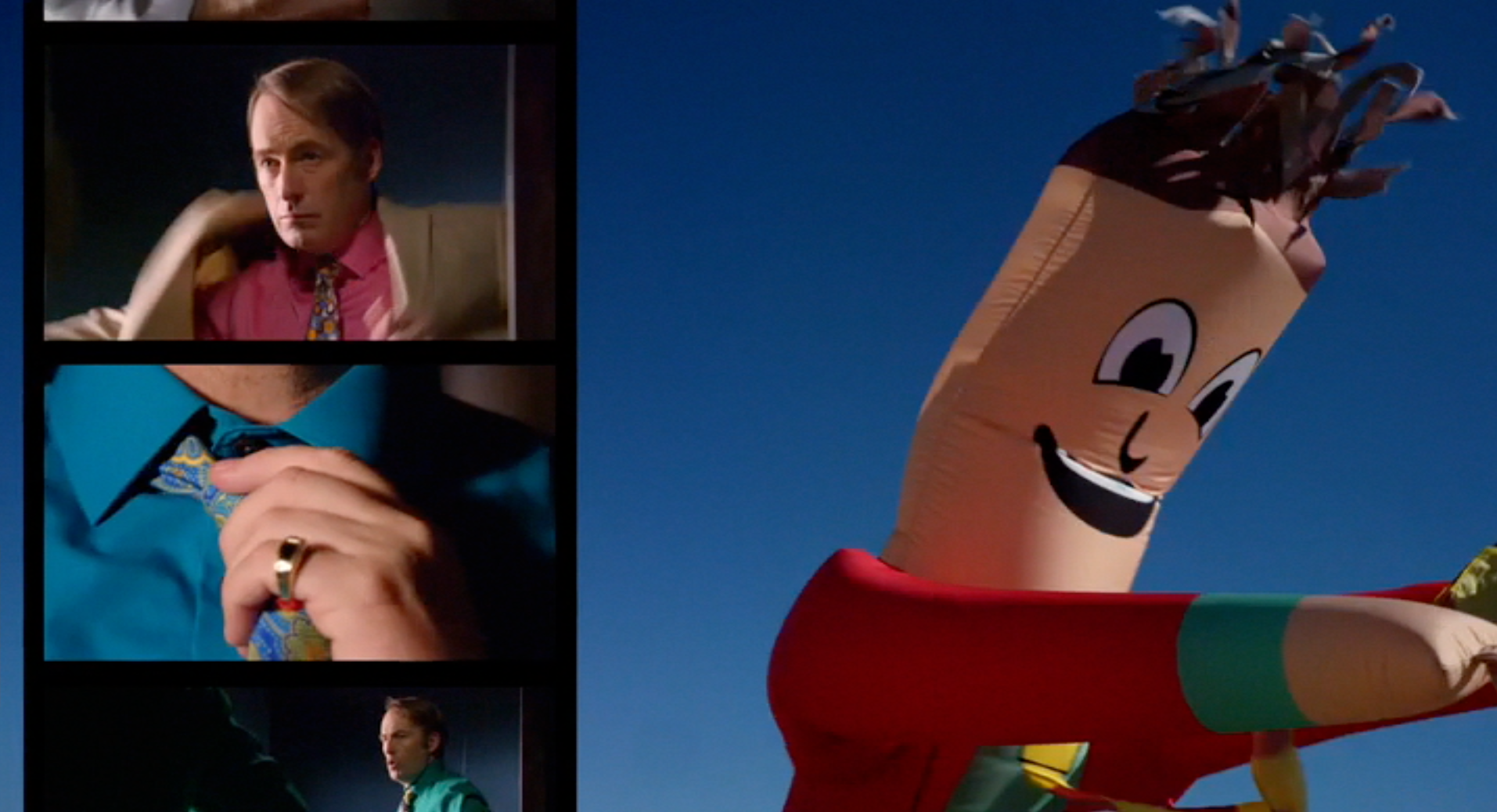 Well, this one was certainly fun. That doesn’t necessarily translate to “good,” but as necessarily disappointing as “Inflatable” is, I enjoyed it, and I think it’s going to prove to be one of Better Call Saul‘s most memorable episodes.

I say disappointing not because I didn’t like it, but because it represents a likely hard stop for many aspects of the show. Yes, we all knew Jimmy’s employment at Davis & Main was a detour at best. He wasn’t going to be there for long. That’s no surprise. But aside from the daring commercial, its inevitable fallout, and, now, Jimmy’s bombastic farewell, the arc didn’t bear much fruit.

I think I’m disappointed because Davis & Main fulfilled its narrative necessity without digging too deeply into the possibilities it offered for characterization. Ed Begley Jr. is always a delight, but now that he’s out of the regular supporting cast it’s easy to see that he didn’t do — or contribute — much of anything to the show. Jimmy’s bristling at Erin’s constant supervision of him was also an interesting dynamic that is now doomed to remain almost entirely unexplored. And his awkward farewell to Omar — who genuinely seemed to like Jimmy if he didn’t necessarily respect him — suggests a fertile pairing that was over before it started.

In short, the job was exactly as disposable as Jimmy, Kim, and Chuck all suspected it was. I was holding out hope for it, and I think I’ll always wish we spent a little more time there. A handful of episodes isn’t enough to really explore Jimmy’s new surroundings, and now we’re already saying goodbye, heading back to the nail salon for the next phase of Jimmy’s career.

To be clear, I’m disappointed because this job could have offered the show so much more. We didn’t see much outside of Jimmy making a well-intentioned blunder, after which we sidelined his character for a few weeks and returned to see him angling to be fired. There should have been more to Davis & Main than that.

The positive aspect of this, however, is the fact that the episode’s cliffhanger isn’t the season’s cliffhanger. When we hear that Jimmy and Kim will (likely) strike out on their own, we don’t have to spend the between-seasons break wondering what that will look like. Potentially we have three episodes already lined up that will give us a taste. That may be worth truncating the Davis & Main stage of things. We’ll certainly find out.

So, yes, I was wrong about Jimmy’s restroom conversation in “Rebecca” suggesting that he decided not to throw away his job. I’m guessing now that the function was to make him look like even more of a dope in our eyes when he almost immediately turned around and did so anyway. But that’s fine! I like getting things wrong. I like thinking through a series of consequences only to find a well-written show present me with an entirely different series. It challenges me as a viewer and expands my horizons as an artist. I’m all for that.

As long as I’m confessing to idiocy, I was also wrong, apparently, about Hector thinking he could use Mike as muscle in the future. At the end of the episode, it seems like it might be the opposite: Mike thinks he can use Hector for work. My new prediction is that next week’s episode is about a surprise party Hector is throwing for the cousins. He hires Mike to wheel in the giant cake, which Gus Fring then pops out of and they fall in love. Callin’ it.

The biggest Breaking Bad connection comes with this week’s enormous piece of the Saul Goodman puzzle: his wardrobe. We learn of its origin here as an act of professional defiance…and man, if that’s not an absolutely perfect in-universe rationale I don’t know what is.

Of course, I think there’s more to it than Jimmy’s need to piss off Clifford; I do think he’s genuinely drawn to the gaudiness. After all, he keeps the suits after they’ve served their purpose, and he wears them all through his incarnation as Saul Goodman. What’s more, we’ve already seen him considering such “optical migraines” in “Hero.” I think this really is just Jimmy’s fashion sense — or some quarter of it — and it also happens to offer an easy out.

The title “Inflatable” refers to the flailing-arm tube-man that inspires Jimmy to reconsider his wardrobe…something which leads to both an incredible montage of the younger McGill purposefully tanking his prospects and to probably the single funniest episode of Better Call Saul yet. It’s easy to turn “Inflatable” comic once you realize you’re going to get Bob Odenkirk back in bright colors and let him honk on some bagpipes in the middle of a workday, but what surprises me is how effectively the comedy works.

Back in “Uno” and “Mijo,” the first two episodes of this show, I thought there was an intermittent problem of tone. That’s not to say that the show faltered in any significant way, but if there was an early weakness for Better Call Saul it was the cartooniness of some of the supporting characters. Odenkirk — to literally nobody’s surprise — understood perfectly and thoroughly the necessary balance between laughter and sincerity. He was a comic actor with the emphasis on “actor,” while some others around his periphery, such as the two young men he teams up with in an ill-fated bid that leads him instead to a crazed Tuco, obviously preferred to lean on the “comic.”

Since then the show’s been better at maintaining the right kind of comedy for its atmosphere. One that’s conducive to big laughs but also doesn’t rob the universe of its gravitas. In fact, “Inflatable” calls right back to those two episodes as Jimmy describes to Mike his encounter with Tuco…and it serves as a reminder — deliberate or not — of just how much better the show already is, by simple virtue of its more consistent tone.

In fact, the rampant comedy of that scene plays right into one of the most deflating moments we’ve seen yet. (Though it admittedly would have landed better if we’d spent more time with Clifford.)

That’s the kind of thing you can only do when you let your characters matter.

…which means he invites Kim to strike out with him at the lawfirm of Wexler-McGill. That’s a pretty loaded name…not just because Jimmy lists her first, but because Wexler-McGill is what Kim’s last name would be if she does indeed turn out to be one of Jimmy’s wives.

What’s more, she agrees with him!

It won’t be Wexler-McGill, though…it’ll be Wexler & McGill. They’ll share office space, they’ll collaborate…but they won’t be partners. They’ll be individual lawyers, operating not together but in close proximity. And I think we can all agree with Kim that this was the better move. Presumably Jimmy will accept her counter-offer; I don’t see a rational or compelling reason that he wouldn’t. But, either way, this could lead to some very interesting places…not least because Jimmy will be free enough to operate in whatever underhanded ways he sees fit, and Kim will be in near enough proximity to notice it.

Something is going to sink this relationship. And we may have just learned the venue for that showdown.

Of course, Jimmy wasn’t the only one courting Kim away from Hamlin, Hamlin & McGill. Was she wise to sidle up to Jimmy while turning down an offer from an established, respectable firm with definite prospects for partnership? Maybe not…but I buy her decision. Easily. And I think it just comes down to one word she used in the interview when she was asked about why she left her hometown. She told them what she wanted: “More.”

Then they made a nice offer.

But we know she wants more.

Whatever that means, whatever it could mean, I believe it.

It’s worth also considering the flashback that opens “Inflatable.” It’s clearly a formative moment for Jimmy, what with being told to decide between identifying as a wolf or a sheep, but what’s more interesting to me is how deliberately it refuses to prove Chuck’s story from “Rebecca” either right or wrong.

Did Jimmy sink the family business? We do see him stealing from the till, but we also see Charles Sr. being so willing to hand over money to strangers that he’s earned an embarrassing reputation for it. So, yes, Jimmy pocketed cash and that’s certainly a terrible thing to do, especially to your own family…but it does seem like Charles Sr.’s habits, as of right now, are more likely to have resulted in the greater loss.

That also explains why Charles Sr. refused to believe Chuck; he himself knew how much he had given away. He refused to let Jimmy take the blame because even if they boy did steal…he couldn’t have stolen as much as Charles Sr. knew he was responsible for handing out.

Just some thoughts…the kind of thoughts you can only have in regards to a show that knows what it’s doing, even if it sometimes, here and there, seems like it might not.

A lesser show would have used the flashback to prove Chuck right or to definitively establish him as a liar. (Or at least as an unreliable source.) Better Call Saul keeps that particular ball in the air.

Because the McGill boys aren’t going to stop feuding any time soon, and I kind of love how often I’m invited to shit my allegiance.