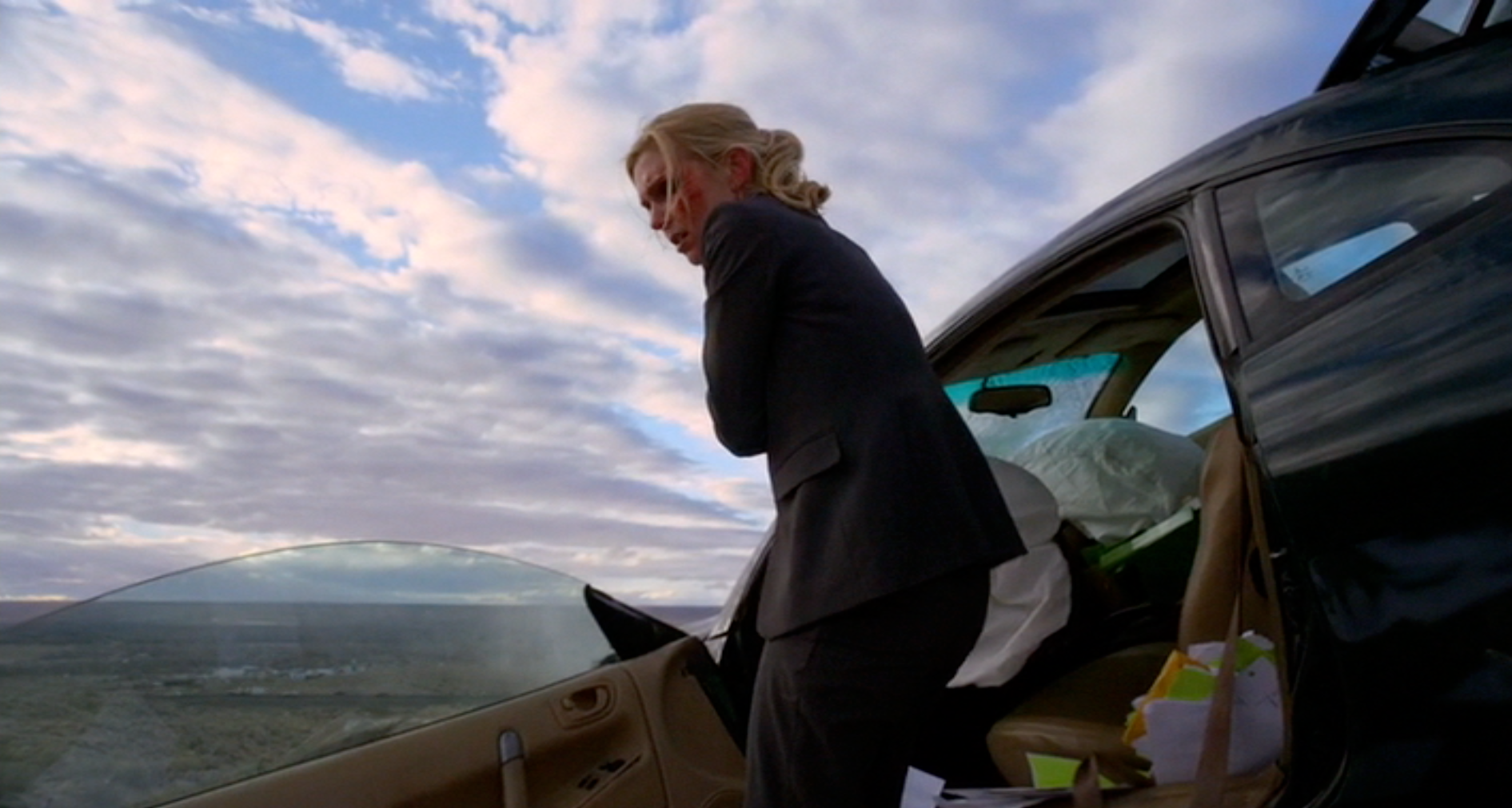 There are a number of television episodes that are made — nearly or entirely — by their endings. “Abyssinia, Henry” from M*A*S*H. “Time Keeps on Slippin'” from Futurama. “The Best Christmas Ever” from Moral Orel. Hell, even ALF‘s “Alone Again, Naturally.” Or, to be more relevant to the matter at hand, “Dead Freight” from Breaking Bad.

I’m not arguing that these are bad episodes if viewed in isolation from their endings. I am arguing, however, that they are enhanced, enriched, and defined by those endings. Take away the final punch and you’ll probably still have something good, but you’ll also have something extremely different.

Those endings provide the context. They’re filters we don’t get until just before the credits roll, but through which we’re meant to view the entire episode. They’re reveals that provide the tools for understanding what it is we just watched. And, in each of the above cases, we don’t even realize we need those tools along the way. We believe we’re watching one thing. It’s rolling along. We’re enjoying the ride. We have a solid idea of where we’re going.

The journey is the story, but the destination defines the journey. Where we end up — or fail to end up — redefines the steps we took along the way.

And Kim drives off the road.

I love Rhea Seehorn. I believe strongly that Kim Wexler is one of the best things on television right now. She’s a rich, believable, important character that regularly pushes Better Call Saul over the line into greatness.

But I’ve wondered about the character before, both within and without these reviews. I’ve wondered if she isn’t too good. If Better Call Saul needed a love interest for Jimmy to work his way through fairly quickly, but who turned out to be too good to let go.

So the question for me — as much time as we spend with her, as well-spent as that time is — was always how long we had left with her. She departs before Breaking Bad begins, and that’s a deadline that seems to approach more rapidly with every episode. What’s more, though: we know* that Jimmy and/or Saul gets married and divorced several times before meeting Walter White, and so, presumably, we’ll also need time to work through those relationships post-Kim.

Kim’s time is necessarily abbreviated, and then abbreviated again. Eventually she and Jimmy will split up for good. Does she leave him for a better opportunity? Does his increasingly seedy behavior drive her away? Is she collateral damage in the fallout of some criminal activity Jimmy or Mike gets up to?

“Fall” doesn’t definitively provide an answer, but it provides another possibility: she becomes a danger to herself.

That’s something I never guessed. Kim’s so collected. So capable. So…great. Surely her destruction would have to come from an external force.

But “Fall” ends by suggesting that it may not.

The funny thing is that it could have, if that were the lesson “Fall” wanted us to pull from it. All the show would have had to do is have her take a shot with Jimmy before rushing off. Have her dawdle for another five minutes and drive 60 instead of 55. Have her explain the situation to her oblivious partner rather than rush out.

Any of those simple, natural responses would have passively reinforced Jimmy as the destructive presence in her life.

But none of that happens. She takes command. She leaves.

And the camera pulls out so that we can survey the damage right along with her.

Of course, it’s worth rewinding. The reason Kim took an additional client at all is due to the fact that Jimmy wasn’t financially pulling his weight. She knew she’d need to make up the difference, so she broke her vow of exclusivity with Mesa Verde to work on an oil rights dispute. That does, in fact, shift the indirect blame back onto Jimmy.

Well…as much as I can’t fault Kim for planning ahead, the fact is that Jimmy has been pulling his weight. Not in the best or most ethical or most reliable ways, but he’s been paying up on schedule…and springing for dinner. What’s more, he was even celebrating by episode’s end the fact that money would no longer be a concern for him. He’d covered his debt to her.

Thinking through the problem and being responsible, is what led to her downfall. Had she taken a mindset similar to Jimmy’s (a vague “That is tomorrow-talk,” as he claimed in “Off Brand”), she’d be fine right now. She wouldn’t have taken another client. She wouldn’t have had to pull extra all-nighters. She wouldn’t have nodded off behind the wheel.

Instead, she rightly identified that Jimmy was unreliable and took steps to fix the problem on her end.

That was the smartest possible thing to do in her situation. And that was her problem.

And part of growing up — truly growing up — is realizing that, with very few exceptions, it’s not something. It’s us. It’s our habits and patterns and thought processes. It’s our hangups and fears and anxieties. It’s who we are that holds us back. It’s the monster in the mirror.

Poor Kim faces the monster at the end of “Fall.” And this, I feel, positions her for the most important emotional arc of the season. I could be wrong, of course, but the rest of “Fall” doesn’t feel like it’s moving its characters toward their final positions before being placed back in the box.

Chuck and Howard clash. Mike makes things official with Gus. Hector takes his pills. Nacho tries to protect — if not exactly save — his father. Jimmy does right by his old Sandpiper clients in an unexpectedly callous way.

It’s not as though things are stagnant. The pieces are moving. They’re interacting. They’re making progress.

But throughout the episode I had to keep reminding myself that there was only one more left this season, because nothing felt like it was approaching any kind of terminal point.

And then Kim crashed.

“Fall” deposited her in a situation that leaves her with no more room for blindness. Unless, of course, she chooses wilful blindness.

Kim Wexler is positioned for a change. Nothing felt as though it was headed for the finish line but, suddenly, immediately, in the blink of an eye, that’s exactly where she ended up.

The destination defined the journey.

—–
* It’s possible that he lied to Walt about this for…some reason, but so far “eh, he lied” has never been this show’s answer to any bit of backstory, and I don’t believe they’d start pulling that crap with something so significant.