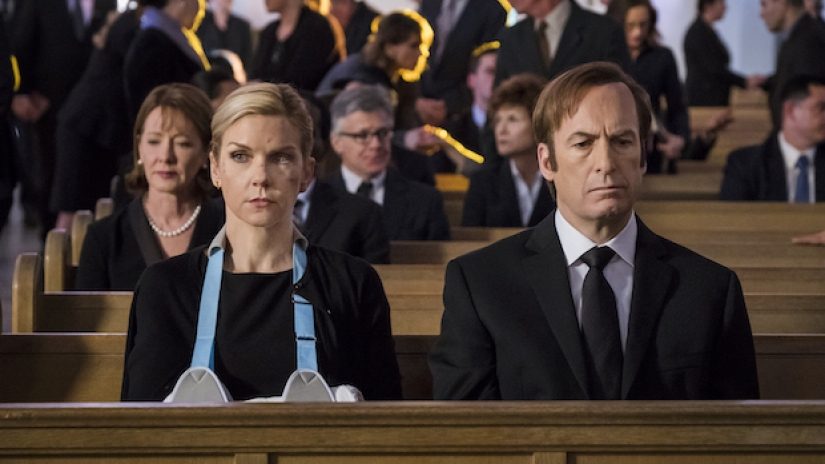 I skimmed an interview with Peter Gould before the premiere of Better Call Saul (I was trying to avoid direct spoilers) and he mentioned that he toyed with the idea of jumping ahead in time after the end of season three. In fact, they toyed with that idea a few times already on Better Call Saul, and did the same when writing Breaking Bad. But each time, they realized there were still stories to tell right where they were.

I’ve said before that my main issue with the final stretch of Breaking Bad was its willingness to jump ahead in time. In any other show, that would neither have mattered nor registered. Breaking Bad, though, spent the vast majority of its run moving deliberately from point to point. We followed every step from A to B to C, so that we could trace not so much the workings of the plot, but the evolutions of the characters.

We didn’t jump from A to C; we watched every painful moment of the characters changing along the way. Loosening their personal moralities. Rationalizing their increasingly appalling behavior. Altering the way they see themselves, and the way others would see them.

Jumping from A to C might have still given us a good show. It’s given us many great shows. But it wouldn’t have given us Breaking Bad.

I think it’s okay that the Better Call Saul writers sat down in a room and wondered whether or not they should leap ahead, but I’m relieved they didn’t. Moreso than Breaking Bad was, Better Call Saul is a specific (if sometimes unfocused) story of personal change.

Jimmy McGill to Slippin’ Jimmy to James M. McGill to Saul Goodman to Gene Takovic with probably a few other incarnations yet to be explored.

Jimmy’s story is inherently a story of change. So was Walter White’s, but in Breaking Bad there was another hook for the narrative and marketing to hang upon: how far will a dying man take his dangerous scheme?

I challenge you to provide a similar surface narrative for Better Call Saul. There isn’t one. We started this show at point A, and met Saul Goodman in Breaking Bad at point C. To skip B is to skip Better Call Saul.

And, of course, nothing (or very little) of what we see in Better Call Saul was in anybody’s mind when they were writing for the character in Breaking Bad. So much more the achievement, then, that this show has found not just a story worth telling, but one so unpredictably mired in and driven by tragedy.

It’s not the story of how Saul Goodman came to like money. It’s the story of Jimmy McGill slowly, agonizingly, terrifyingly losing his grip on his own humanity.

I love Jimmy. I love Saul. But I love Saul as a character, as comic relief, as often the sole buffer between enjoying Breaking Bad and being overcome with despair. By contrast, I love Jimmy as a human being.

I think it’s fair to say Jimmy McGill is a good person. Not a great person, but a person with a heart. A person who cares. A person who feels remorse.

He has all of the qualities we typically associate with the hero. Better Call Saul is the story of how (and why) he instead became the villain.

That may sound a lot like Breaking Bad, but I think it takes a supremely inattentive viewing of that show to believe Walter White started out as anything like heroic. Breaking Bad did a great job of layering in from the beginning the fact that Walter White was kind of a piece of shit.

Jimmy McGill, by contrast, wasn’t. He was an opportunist. A bit selfish. He had a checkered past. But within the confines of this show, he’s done very little but try to build himself up legitimately. To rise above his station. To become the person by all rights he should be.

But life holds him back. It pulls him down. Walter White was dealt a bad hand in terms of the cancer, yes, but how he responded to it, the help he refused, the path the followed, the life he chose not to abandon when the cancer went into remission…well, those things were his decisions. Jimmy McGill faces blow after blow. He doesn’t face one (admittedly large) tragedy and willingly throw his humanity away…he’s gradually worn down. He’s slowly beaten. He’s dragged away from where he wants to be toward where the universe has decided he will be.

And that’s why I think the strongest indication that he’s becoming Saul Goodman happens in this episode, when Howard Hamlin blames himself for Chuck’s death…and Jimmy lets him.

We’ve seen Jimmy wear Saul’s clothes and use Saul’s name, but I think that’s the first time he’s shown us the blackness of Saul’s soul.

Kim blames herself. Howard blames himself. Jimmy learns that he’s actually the one to blame, if anyone is, and he feeds the fish. Makes some coffee. Lets somebody else take up his cross.

And that’s what we miss if we jump ahead in time. We miss Jimmy McGill sitting on the couch and Saul Goodman standing up from it.

—–
Note: iTunes seems to have made some kind of change between last season and now that prevents me from taking screengrabs. Even Print Screen doesn’t work; I just get a black rectangle. Way to punish me for not pirating, Apple. Anyway, the odds are good I’ll just have to rely on AMC’s boring official episode photos this season. I’m probably more disappointed than you are, but it was nice to pick the moment of each episode that actually resonated with me, rather than the one AMC thinks should have. For the record, this review would have featured Jimmy smiling after feeding the fish.