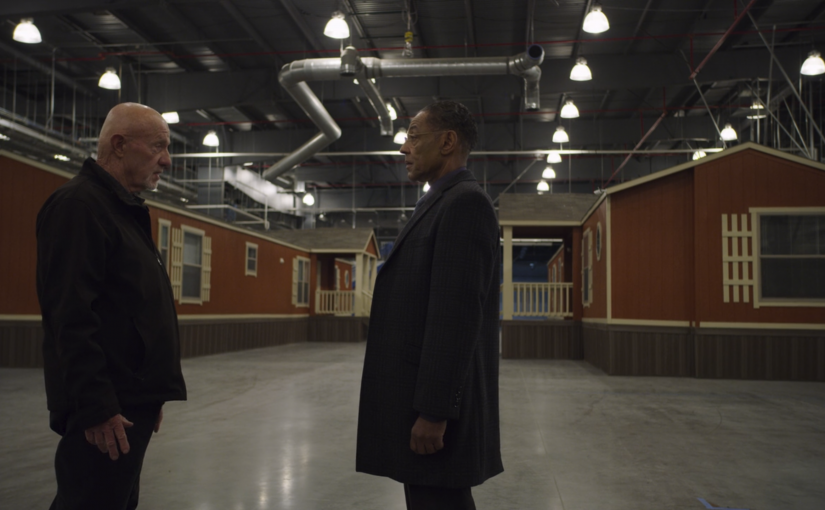 After last week’s great episode, I had the sense that the season was going to really start moving. And in one way I think I was right, but “Piñata” sure doesn’t feel like it.

Things happens. Lots of things. To everybody. (Well, except for Nacho, but the longer they keep him out of the show the luckier his character is.) And yet it didn’t feel all that dynamic.

Pieces slide around the game board for a bit. There are good moments and some great ones. It’s by no means a bad episode. So why does it feel empty?

The thing I liked most about “Piñata” is the fact that each of the characters gets the chance to enjoy what they do. Don’t get me wrong; I understand that Better Call Saul is an inherently cynical show. We know where nearly all of these people end up, and we know any bright spots in their lives won’t be around forever. (“Make hay while the sun shines,” Saul eventually advises Walt.)

So Kim gets to have her cake and eat it, too, keeping both Mesa Verde and her work as a public defender…a conflict I honestly didn’t think could have a happy ending. She also gets to become a partner at a reputable law firm right out of the gate. She’s set financially, professionally, and personally satisfied.

Mike gets to do what he loves most: point out the flaws in other people’s plans and correct them. He notices immediately that Gus was setting up his German construction crew for cabin fever, and he gets to establish a far more comfortable environment for them. Everybody wins.

Gus gets to torment Hector, likely his favorite pastime. He relishes the eternal hell he plans to put the man through, and, yes, we certainly know how that ends, but it’s always nice to get Gus sinking his teeth into a menacing monologue.

We see Chuck and Howard in flashback celebrating a great win for HHM. And, sure, we know how that stuff ends, too, but it’s nice to open the episode seeing the smaller firm of HHM growing into something big and establishing a reputation before we revisit it later as it all falls apart. And, okay, Howard likely didn’t feel much catharsis with his “Fuck you, Jimmy,” but I enjoyed it on his behalf.

Then, of course, there’s Jimmy himself, who daydreams and doodles about getting Wexler-McGill back up and running. Kim taking a new job interferes with those plans, but I don’t think Jimmy has given too much consideration to that. In fact, I’m pretty sure he’s trying to scrape together some money to buy that damned sign he’ll never get to hang anywhere.

But with a lack of payoff for anything, “Piñata” feels like a balls-in-the-air episode, regardless of how much forward movement there actually was.

The Germans move into their living quarters, but work hasn’t started. Mike clashes with a new guy named Kai, but we don’t have any clear sense of how, exactly, that will come to matter. Gus taunts Hector, but the guy’s still in a coma. Kim is offered a job, but hasn’t accepted it yet. Howard needs to make some kind of change to save his firm, but isn’t doing anything.

All of this is likely setup for some massive changes that will arrive sooner rather than later, but for now it’s only setup. Enjoyable setup, but setup that doesn’t play much like an actual episode. It plays more like 45-minutes’ worth of things that need to happen before next week.

The biggest question “Piñata” left me with is probably one I arrived at just because my mind was allowed to wander: How will Better Call Saul establish satisfying points of termination for these characters?

Breaking Bad had it relatively easy. The characters just had to depart from the show. Walt bleeding out, Jesse speeding away, Hector blowing up Gus, Hank going down swinging in the desert…the list obviously goes on. And anyone left when the dust settles gets to go on living their lives, finally free of what seemed to be an endless, constantly expanding nightmare.

Better Call Saul, though, can’t do much of that. It needs to bring its characters to where they were when Breaking Bad began.

In some cases, that changes nothing. We’ve already passed Chuck’s terminal point, and anything can still happen to Kim, Nacho, and Howard.

In Jimmy’s case, we know he becomes Saul, but that’s okay, too, because that really is a kind of direct closure for this incarnation of the character.

But what about Gus? We’re spending a lot of time with him, and that’s fine, but can he really go anywhere? He already manages Los Pollos Hermanos and secretly operates as a druglord. He is expanding and refining his process, but what can change? Where can they take the character? Is the Gus we know now different in any truly notable way from the Gus we knew in that other show? What is his arc in Better Call Saul? “Getting slightly better at his job,” for the record, isn’t one.

The same goes for Mike. He’s our other protagonist on a show that’s named after neither of them. He integrates himself more and more deeply into Gus’ criminal empire and he probably does some horrible things we don’t know about yet. But he’s still driven in Breaking Bad by his desire to provide for the same two family members we see him providing for here. They make it to that show okay, he makes it to that show okay, and I don’t know what about that dynamic can possibly change or even be made more interesting.

I’m invested in Jimmy because I know where he’s going, and that slope is only getting more slippery. He is losing himself, his identity, his soul along the way. That’s a journey, and it’s one worth taking.

I’m invested in Kim because I don’t know where she’s going, and I’m genuinely worried for her. When she opened up about her public defense work to Jimmy this week, I was glad because it emphasized the gulf that’s growing between them. Knowing he becomes Saul, I want her making as clean a break as possible. Right now she still has that chance. There’s inherent tension there. We know who Jimmy becomes. Who does Kim become?

But for Gus and Mike and Hector and so many of our other Breaking Buddies…where are they going? What is their narrative? I believe in Better Call Saul‘s ability to surprise me. It’s done it before and there’s no question it will do it again.

Right now, though, I’m not sure how much more it can tell us about certain characters. How much there’s left to learn. How many miles could possibly be left in their journeys.

We’ll see. This show has often proven me wrong. “Piñata,” though, doesn’t have any interest in doing so. It just sets everything up that needs to get smashed to pieces in the very near future.