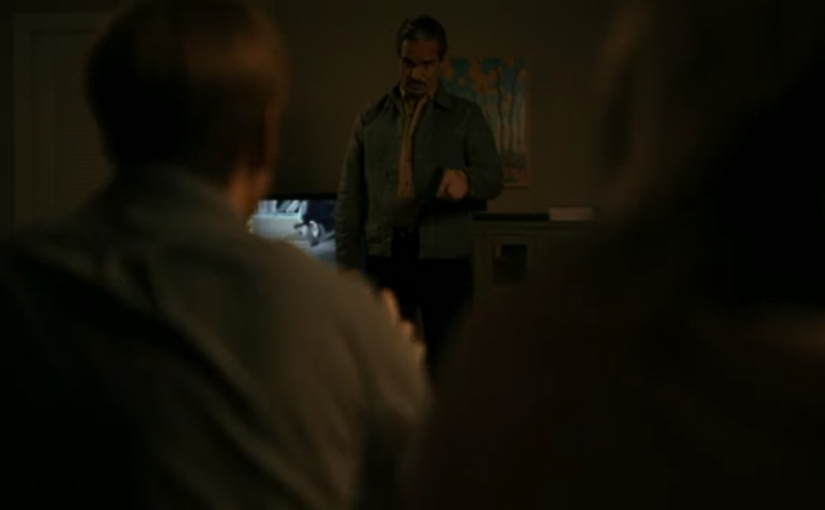 Around the time we first met Eduardo, I mentioned that this show and Breaking Bad had portrayed the drug trade — this specific iteration of the drug trade, at least — as a sort of graceful dance. Deadly, yes. Horrific, yes. Massively awful for all involved, yes…but everybody had a role. Everybody understood what was expected of them and when. Nobody deviated because, as in a dance, deviation would lead to confusion. All of the participants relied on the others to follow the choreography. Everybody had a role, and part of the danger in deviation was that everything would crash down, for everybody. Deviations occurred, but they would never be the rule and would always be at the deviant’s own peril. It was in all of the dancers’ best interests to keep dancing.

Eduardo showed up on Better Call Saul and immediately started treating it instead like a bar fight. Everybody makes their own rules. Throw a punch whenever you want. Smash a chair over this bystander. Burn down the place, if you like. Eduardo was a poor dancer, but he was a great bar fighter. He could never have survived if everybody kept dancing, so he flourished by starting a brawl instead. He changed the rules. At least, he tried to.

This episode illustrates the difference. Saul Goodman, criminal lawyer, is not a good guy. He is on the side of evil, at least in terms of having a role to play that facilitates the continuation of evil. And so bad people in the drug trade come to him. He has a specific role to play, however; he’s not an all-purpose evil dispenser. There’s the choreography again.

You can’t — and I must be very clear about this — drive to his house and tell his wife to go murder your enemies.

At the end of the previous episode, I think I forgot that Eduardo is a bar fighter. For whatever reason, on whatever level, I still had the show’s choreography in mind. I expected Eduardo to draft Saul back into Saul-like dealings, into shifty background business, into introducing him to somebody who could more actively get his hands bloodied.

I was dead wrong. Eduardo wanted an assassin. …sort of.

That part is a bit hazy to me, and I think that it’s hazy in the correct way. Clearly, Eduardo at least suspected that Gus would meet him at the superlab. Almost as clearly, I think that that was the outcome he was hoping for. But something about the specificity of his demand to Kim — in particular, the insistence that she take a photo of the corpse — makes me think that Eduardo was hedging his bet.

In his mind, it was very, very likely that Kim would kill Gus’ body double, or somebody else. It was very, very likely that he himself would have to deal with Gus and would get a guided tour of the superlab. Even so, it was possible that the stars would align in such a way that Kim would have been the one to kill Gus. Had that happened, Eduardo would still want his trophy. (It’s worth noting, of course, that he’s is sending Kim away to commit murder, even if he were certain that Gus wouldn’t be the one who took the bullet.)

I had two predictions before “Point and Shoot” started. One was that the entire episode (or some overwhelming majority of it) would revolve around the disposal of Howard’s body. I was wrong.

My other prediction, though, was that this second half of the season would go one of two ways with Eduardo: Either it would kill him off immediately, or it would end with him still being alive, possibly with a return (or the threat of a return) in whatever flash-forward Gene sequences we get. I can maybe claim some partial credit there, but what I was actually getting at was that Eduardo couldn’t have a traditional villain’s death. We couldn’t get a back stretch of episodes in which he ran around making things more difficult for everybody else, leading to some sort of climactic confrontation. That wouldn’t have fit the character. Eduardo is not a man of structure and his character doesn’t allow for pistols at dawn. Eduardo is a force of chaos, and he’d have to depart the show in a structurally chaotic way.

He did, and I enjoyed that. I enjoyed the way in which he got everybody scrambling, just to manage him, popping up over here and then over there, like the Cheshire Cat. You can’t know where he is; you can only know where he just was.

Well, I guess now we know where he is, but you get the picture.

“Point and Shoot” was great. It’s hard to say that it was a good “conclusion” to the previous episode, because this show doesn’t really allow for conclusions. Saul and Kim will still be dealing with the fallout next week. In other ways, Gus and Mike will as well. It’s certainly possible that Better Call Saul, after a very strong start to the season, will ultimately fall on its face. I don’t think that that’s likely but, at the same time, all I can really say is that they’ve managed to keep the ball in the air.

One thing I will add is that, when Eduardo died, my mind tricked me. I remembered Nacho’s death a few episodes ago, Howard’s death in the previous episode, Werner’s death before that, and Chuck’s death long ago. With Eduardo’s death, I thought, “Now we’re just left with the Breaking Bad characters.”

I realized my mistake a few minutes later, but I don’t think that I forgot Kim. I think, instead, that I’ve accepted Kim as being more than a “new character” created for this show. She’d been, at some point, for me, mentally promoted to the same status that Saul, Mike, and Gus share. The status of being bigger than “Better Call Saul characters.”

She was created for this show, without question. She is filling a very important, specific, and formative role in the creation of Saul Goodman. So are many of these characters, however. Kim, though, feels different. More important. More significant. I don’t know how well I can articulate my feelings here, but I can at least say that she feels larger than she really is. I feel as though I’ve known her longer than this show has been around, and that’s impressive work on its part. It will be interesting, and probably devastating, to see what happens to her.

I’ll need more time to digest this one, I think, and I may circle back around to it in later reviews. For now, though, I will say that my favorite moment was Saul pleading with Eduardo to let Kim commit the murder instead of him. He was flailing, of course. He didn’t have time to think anything through. He was “scheming,” but only in the most desperate sense of that word. He was so fucking scared of Eduardo in that moment, that he couldn’t leave Kim alone with him. It would have been better for Kim to become a murderer than for her to be stuck in a condo with that man.

That was fucking terrifying.

Part of me wonders if that were also…well…Jimmy. It wasn’t just Saul volunteering to be in one position while Kim took another; it was Jimmy sacrificing himself. I wonder if, on some level, Jimmy hoped she would just leave. Go to the cops, go to another city, go anywhere but fucking here. She wouldn’t commit the murder, she wouldn’t return, and Eduardo would kill Jimmy as a result, but at least Kim would be safe somewhere far away.

I don’t think that that’s what Jimmy wanted, but I do think that he would have seen that as a better outcome than most others.

I don’t know. Maybe it depends on how much of Jimmy actually still remains.

Saul would weasel out of something like this to save his own skin. Jimmy might do it to save somebody else’s.