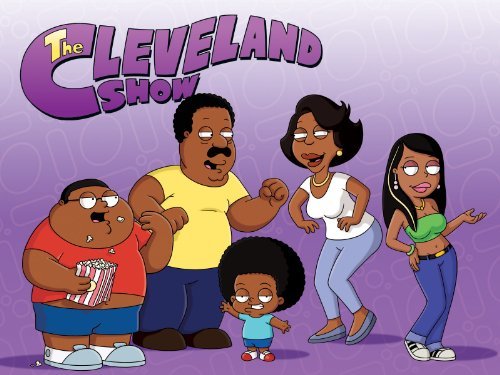 I don’t think it’s even a slight exaggeration to say that The Cleveland Show is absolutely the worst thing that has ever happened in the history of everything.

For starters, I’m still not sure why it exists, ever has existed, or will continue to exist. Perhaps the Family Guy writers were sick of having a character around that hadn’t yet devolved into a sociopathic asshole and so they shipped him off to his own show so they would never have to write for a second character type again. Or perhaps we all just raped a lot of grandmothers in our past lives and this is our karmic retribution. Whatever the reason, it’s shit.

Then again, with the exception of the first episode, I’ve never sat through an entire installment of The Cleveland Show. Oh, I’ve seen a bunch of them most of the way through, but I rarely pay much attention to it. And as Fox has won me over with two recent animated shows that I expected to be utter garbage (Bob’s Burgers, which is legitimately brilliant, and Napoleon Dynamite, which isn’t awful and therefore qualifies as miraculous), I figured I’d give this one another shot, liveblogging my thoughts as I go. Who knows, maybe I’ll end up loving it. If so, I’ll end the liveblog with a justin.tv link to my live, streaming suicide.

Oh, and before we begin, The Cleveland Show is currently in its third season. That’s at least a season more than three of my all-time favorite shows were allowed to have. And this would be the season that saw the still-brilliant American Dad! airing episodes of such stellar quality as “The Vacation Goo,” “Meter Made,” “Dope & Faith,” “The 42-Year-Old Virgin” and “Widowmaker,” all of which would be serious contenders for my list of favorite episodes of anything ever. SO LET’S SEE HOW THE CLEVELAND SHOW MEASURES UP I’M SURE IT’S GREAT.

6:15 — The plot summary for this episode says that Cleveland goes deaf, his wife Roberta goes back to school, and his son runs against his step daughter for class president. So, the three blandest plots imaginable in one easy-to-swallow episode. I’m just sorry Cleveland doesn’t also have to impersonate his Texas cousin Austin and then have to run back and forth between two blind dates.

6:30 — It begins. God I hate this theme song. Not that Family Guy or American Dad have real winners or anything, but is this whole thing just an excuse to have him sing “happy mustache face?”

6:31 — Cleveland is crawling through some heating ducts. Then he’s done and his wife starts crying. Excellent writing so far.

6:32 — Cleveland attempts to “use the force” to get a remote control to levitate into his hand, and then he convinces his son to make him a sandwich. This is on the air, folks.

6:33 — New scene, Cleveland Jr. is talking to his teacher about being class president, or something. Then the teacher flashes back to…a few hours ago maybe? He’s singing “Fuck You” in a barbershop style. This was a lot funnier when the chickens sang it in the recent Muppets movie, and even there it wasn’t particularly funny.

6:34 — Cleveland said that something’s got his wife all “insane in the femme brain.” That’s the closest thing to actual humor I’ve heard in this episode yet, and it’s long out-of-date reference to Cypress Hill. Does anyone even know who they are anymore? And did I almost laugh because it was funny, or just because I recognized it? It’s probably the latter…

6:36 — Cleveland’s step daughter showed up to a class presidential debate dressed as Sarah Palin, because Sarah Palin was also someone who was at some debates once. I guess.

6:37 — Cleveland’s wife tells him he can’t go on a hunting trip because he might get killed. Then she plays “Taps” on the recorder. I’m honestly not sure if these even qualify as jokes, so much as they’re just things that happen after other things happen.

6:39 — Cleveland Jr. hires the talking baby (whose name is Black Stewie, or should be) to convince the Sarah Palin girl not to run. Then we cut back to Cleveland who hears a gun go off and then is deaf.

6:40 — First commercial break. What’s happened so far? I can’t even summarize it. There’s no narrative flow to speak of, which, hey, isn’t a huge deal in itself for a cartoon show, but there also haven’t really been any jokes. I almost think that this show must be written for toddlers, the way all the jokes seem to have the word “fart” or the sound of a burp as a punchline. That’s where we’re supposed to be laughing, people. And I do imagine it would be a fucking riot if I was…six.

6:41 — Commercial is over; that was quick. Cleveland is at the doctor and speaking in a steotypically hilarious “deaf guy” voice. This sure bodes well for the rest of the episode.

6:42 — In order to hide his impairment Cleveland is just agreeing with everything his wife says. Fortunately the “deaf guy” voice went away, which is a good thing but probably wouldn’t have happened if any of the people writing this thing gave a shit.

6:43 — A sign outside the school says ELECTIONS TODAY, and two children hold up the letter R, giggling, before they change the sign to read ELECTRONS TODAY. That’s genuinely clever. Credit where due…I’m happy to admit it when good writing works its way into this show.

6:45 — Cleveland’s hearing comes back, because I guess the writers ran out of funny jokes to make about serious injuries resulting in permanent hearing loss.

6:46 — Cleveland is wearing ear plugs so that he can go on agreeing with everything his wife says…though I’m not sure why he has to be deaf to do that, particularly when he was hiding the fact that he was deaf anyway. Shouldn’t the fact that his hearing came back just sort of…solve the problem?

6:47 — Cleveland’s wife sold his baseball cards, which I’m sure we never heard about or cared about in the past, to pay for school. Because she’s going to school, I guess. As a direct result of this, Cleveland dresses up as a giant sandwich and then runs away from his fat son, screaming. Another commercial begins because, seriously, where the fuck do you go from there?

8:51 — The step-daughter is elected president and then immediately resigns, which is hilarious, as that’s definitely the kind of joke we need to be making about a minor news item that’s three years out of date.

8:52 — Black Stewie walks down a hallway and disappears.

8:53 — Cleveland admits to his wife that he couldn’t hear for a while, but then could, explaining why he was agreeing with everything she said, making this, I don’t know, the third time the show needs to explain itself to us. Maybe if it didn’t worry so much about whether or not we understood its nonsense, it might find time to make us laugh.

8:54 — Then again, the funniest thing in this episode is still the Cypress Hill reference so…fuck that.

8:55 — Cleveland’s house is in turmoil because his wife was at college. Then she comes back. Wow, that plot development lasted a full minute, and didn’t really give us any jokes unless you count the fact that Cleveland thought his wife’s new friends were pretty as a joke. Which, well…why the hell not. Might as well fill out the numbers.

8:56 — Third commercial break. The story so far: Cleveland was deaf for two minutes, his wife was at college for sixty seconds, and there was an entire school election plot that happened entirely off-camera. I honestly think I’d get more out of this show by not watching it.

8:57 — Oh, it’s over? Nice…uh…punch line. For those who weren’t watching, it ended with Cleveland walking upstairs.

Thanks for sharing the laughs, everybody!