Receiving spam is nothing notable anymore. Every so often something crawls past Yahoo’s proprietary filers, but since I only use this Yahoo account for spam anyway, it’s never a problem. But recently I received the following in my inbox:

…and that’s just upsetting. Where’s the craftsmanship? The incentive? The heart-rending tale of woe intended to get me out to Western Union as quickly as possible?

There’s an art to this kind of spam, and it’s an art that “Conniel” is disrespecting entirely by sending out something so effortless.

Set aside the poor grammar (as there’s really no getting around that) and you have a woman(?) telling me she’s sick, and asking me to take her funds so that I can give them to charity. Then she demands — doesn’t even implore! — that I email her back. The subject line is promising, but nowhere does Conniel actually invite me to save any souls so I’m pretty disappointed. Sing us a song…you’re the spammer man.

This is the equivalent of a real-life panhandler saying, “Give me three dollars.” There’s a big difference between that approach and, “Excuse me, could you spare any change?” They both want three dollars, but one is far more likely to get it from me than the other.

And you know how panhandlers will often times call out, “God bless you, sir,” when you pass by, ignoring their request totally? That kills me. That kills me because it preys on the same part of me that guilt-farming spam emails are meant to prey upon.

It’s also suggestive of a story, an unseen personal history for the panhandler. Yes, we know he needs money. But now we also know that he’s selfless enough to wish God’s blessings upon you after you turn away from his needs. It sketches in just enough humanity to make it seem legitimate, like a request above and separate from the money he needs to survive.

By contrast, I dug up the most recent variation on the deposed Nigerian prince email that I’ve received: 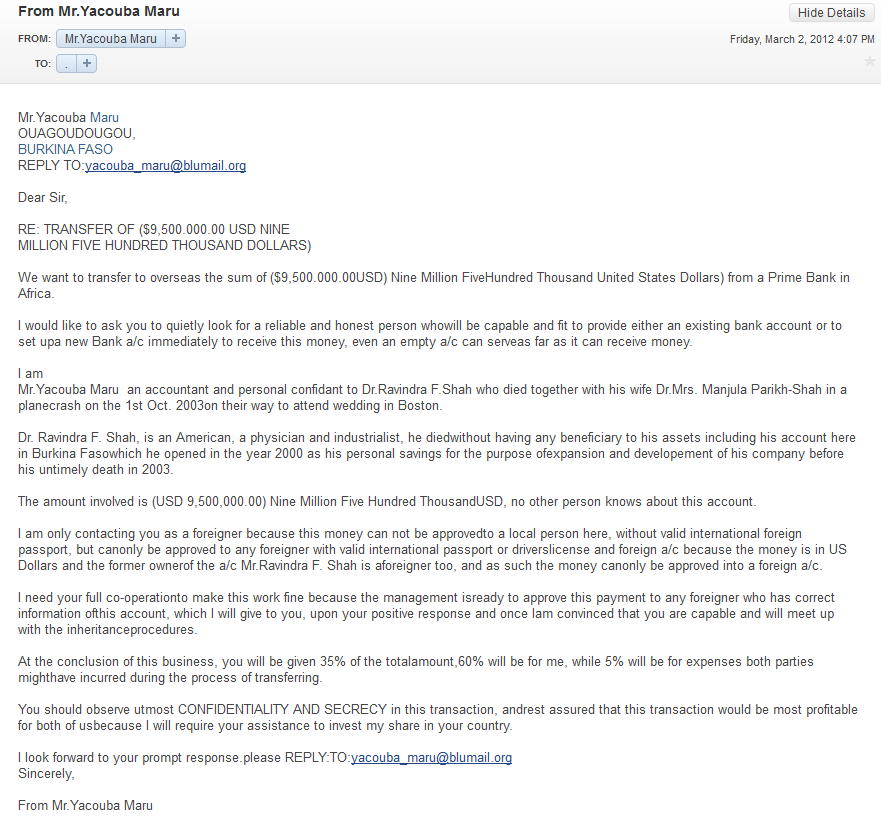 It’s misleading, of course — at least, it’s misleading in the sense that it’s a total lie — but there’s also some effort behind it. Details are arranged and the requirements for cooperation are well explained. This does more than pencil in some human tragedy…it writes an encyclopedia entry about it and implores you to learn more.

In short, they’re working for the money. They’re not saying, “Give me three dollars.” They’re constructing an elaborate world of weddings, plane crashes and corporate expansions. None of these details are necessary. Mr. Yacouba Maru could have easy said “yo I’m sick email me, something about charity” and been done with it.

But instead he took time. He thought this through. His story may not be worthy of my money, but it sure as hell is worthy of my time.

Is that too much to ask from my spam? An engaging customer service experience?

It still needs work, but that’s a lot better. I have a better idea of what she intends to do, if no better idea of what she expects from me. I understand the nature of her tragedy (I’m “sick” too, lady…I have a box of tissues on my desk and by fuck do I ever use them). I also like the passive suggestion that she can’t donate the money herself because she’s already donating her body…as though if she hadn’t promised her body to somebody else already she could use it to deliver the money after death. It’s sweetly innocent. Conniel might be too young to understand why that wouldn’t work…or perhaps she’s dazed by the ravages of her esophageal cancer…which she was kind enough to link as a keyword to a page on a medical website that helpfully explains what it is. I guess if you can’t be asked to spin a yarn yourself, you could just leave some breadcrumbs around the internet and hope I follow them.

Still, though, this is a huge improvement, and I look forward to seeing more from Conniel in the future. I think with some practice and a lot of guidance, she can grow to become a really effective spammer, and I wish her all the best. Sh-So back, Conniel, so I know you got this.