In preparation for Moonrise Kingdom, I thought it might be interesting to compile some brief words about each of Wes Anderson’s previous films into a short primer, in the hopes that it might interest some folks who have never experienced his work to check him out. Hopefully this will function as a nice starting point for newcomers, or maybe those who felt left out because they started with the wrong film. Or, perhaps, it’ll just be an excuse to relive the great stuff (and Fantastic Mr. Fox) that Anderson’s done in the past. I hope you enjoy. 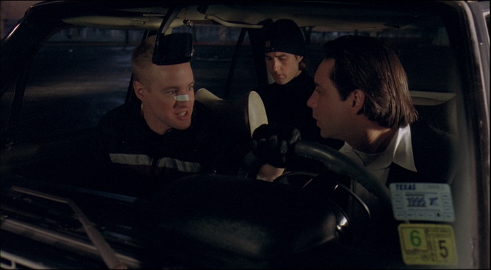 Overview: There’s really no more diplomatic way to put this: Bottle Rocket is the work of somebody who would become a great artist, before he was either great or an artist. The story of three friends who turn to high-reward heists as a way of financing their meticulously planned futures — or, rather, the story of one friend who does that and the two others who go along with him — contains precious little of Anderson’s magic, style or cleverness. It’s not devoid of value — both of the major heist sequences are all-time highlights — but it fails to build any serious momentum, and derails entirely about halfway through. Luke Wilson falls for a maid played by Lumi Cavazos, and his romantic overtures are nothing short of predatory. That can be handled well, but it doesn’t seem as though either Anderson or his actors are aware of it, causing the romance to work out in a way that neither justifies itself nor feels like a natural evolution of the dynamic between those characters. It’s a creepy and utterly misguided plot development that interferes with the better aspects of the film — Owen Wilson portrays manic depression here quite well, and Robert Musgrave is one of Anderson’s great one-offs — and gives no indication whatsoever of how well Anderson would deal with similarly mismatched pairings in the future. There’s also a notable lack of visual panache, and none of the action or dialogue feels as meticulously constructed as it does in Anderson’s later films. But no worry…Bottle Rocket taught Anderson a lot, and only two years later he would make this:

Overview: I don’t know who made Bottle Rocket, because Rushmore is in just about every way the real Wes Anderson’s debut. Every one of his hallmarks is not only on display here, but operating in full and confident force: father issues, brilliant shot composition, inventively reappropriated pop-songs, a clearly artificial but deeply moving world, and an unwavering devotion to tearing down his characters’ conceits. It also marks Anderson’s first collaboration with both Bill Murray and Mark Mothersbaugh — though Mothersbaugh did step in after the fact to provide a score for Bottle Rocket — both of whom would shape immediately what comes to mind when we think about the concept of “a Wes Anderson film.” Rushmore is the story of Max, an over-reaching and under-achieving 15 year old, who harbors so many aspirations that there’s no way he can focus clearly on any of them. Until he meets Miss Cross that is, a teacher at Rushmore Academy with whom he attempts to begin an affair. At heart, though, it’s a story about growing up, as are all of Anderson’s, and it’s a story about friendship, both with a steel mogul played by Bill Murray and his dedicated lackey played by Mason Gamble. It’s essentially a story about appreciating what you already have, which, as Max comes to learn, is never as much as you think it is, but always what you need.

Overview: It would be impossible — simply impossible — to heap too much praise upon The Royal Tenenbaums. To date, this is clearly Anderson’s masterpiece, and that’s some high praise indeed. Absolutely nothing about this film is wrong. There is no detail overlooked, no line of dialogue that doesn’t both amuse and hurt, and no actor who is anything but perfect for his part. Even Ben Stiller turns in a performance he’ll never top — not that he ever tries — and the soundtrack is absolutely stellar. Gene Hackman plays Royal Tenenbaum, patriarch of the formerly well-respected Tenenbaum family, though now the children have all moved on…and down. It’s a story of dissolution, of consequence, and of maybe, sometimes, just possibly, righting wrongs that have sat painful and unaddressed for decades. In Royal’s case, he does this by pretending to have cancer in order to keep his wife from marrying a black man, but it’s not where you start that matters…it’s where you finish. The Royal Tenenbaums is Anderson’s most overtly affecting film, flush with raw and frustrated emotion, and brimming with what’s probably his darkest comedy yet. Hackman brings a selfish and charming energy to the role that pervades even scenes he’s not in, and his gradual awakening to the damage he’s done — even as he’s in the midst of doing more of it — is expertly handled with the careful and attentive touch of a brilliant director working at the absolute top of his game.

The Life Aquatic With Steve Zissou (2004)

Overview: The Royal Tenenbaums might be Anderson’s best film, but The Life Aquatic With Steve Zissou is my favorite. And I don’t just mean it’s my favorite of Anderson’s…I mean it’s my absolutely favorite film period. Attempting to justify my adoration for this movie could only leave me unsatisfied by what I’ve said, so I don’t think I can actually even try. What I can say is that Anderson has built a deeper, more profound and more magical world with The Life Aquatic than he could ever build elsewhere. The plot follows celebrity oceanographer Steve Zissou as he seeks mortal revenge on the mythical sea creature that killed his partner, but that’s really just the impetus for what the film’s actually about: Steve learning about who he is…and, more importantly, who he’s not. Along with him on this fateful voyage is Kentucky Air pilot Ned Plimpton, who may be his son. Ned’s unexpected appearance is only the first of many things that force Steve to explore inward for once, and his rotating, conflicting emotions manifest themselves in some brutal ways throughout the course of the film, culminating in a display of ultimate humanity…long after it can do him any good. It’s flawed, and it’s unfocused, but then again so is everybody. The Royal Tenenbaums gets my vote for the only perfect film ever made, but The Life Aquatic With Steve Zissou hits me in ways even that one can’t, and that’s why it immediately became — and remains — my favorite film of all time.

Overview: A noticeably quieter film follows The Life Aquatic, with a far tighter focus on a much smaller cast, and an adventure that takes three isolated, entitled American brothers and strand them during their soul-seeking train ride through India. In actuality, though, the trip they take is interpersonal, and the souls they seek very quickly turn out to be each other’s. The Darjeeling Limited feels a little less deliberately constructed than Anderson’s previous three films, and that’s clearly deliberate. Rather than thrusting the audience into one of Anderson’s worlds, Anderson’s taken three of his characters out of an Anderson world and thrust them into our own. The characters in India are less affected, less prone to staring coldly into the middle distance, and don’t rely on the snipes and jabs of the Whitman brothers to get their point across. It’s an experience in personal growth for them, as they realize that they don’t at all need to be damaged and conflicted adults they’ve become. Mark Mothersbaugh did not return as original score composer for this film, nor for anything beyond The Life Aquatic With Steve Zissou. His absence is felt, and Bill Murray’s relegation to a cameo contributes to this not feeling quite the way we now expect an Anderson film to feel. But, again, it works to separate the adventure within The Darjeeling Limited from what’s come before, just as the movie itself feels separate. The brothers Whitman have a lot to work on, after all, and they don’t need you bringing all that old baggage along.

Overview: A strict structuralist like Anderson would no doubt appreciate the fact that we’ve both begun and ended on disappointment. (In fact, as a disappointment fetishist, he’d doubly appreciate it.) Fantastic Mr. Fox had a lot of people asking questions when it was announced, and it’s pretty safe to say that it didn’t satisfactorily address them when it arrived. It almost seems silly to say this, but Anderson’s so gifted at manipulating human behavior, treating his characters like dress-up dolls brought to life and thrust into complex social situations without practice, is lost on a film where that’s what he’s doing to literal dress-up dolls. He’s assembled an excellent voice cast, and his newcomer brother Eric Chase Anderson shockingly blows the rest of the seasoned actors away, but his curious expansion on a minor Roald Dahl story just doesn’t come together the way it needs to. As could be expected he sprinkled the experience with great songs, which might well turn young children on to music they might not have experienced otherwise, but it’s doubtful that it’s turned many children — or anyone for that matter — on to the films of Wes Anderson. Moonrise Kingdom is on the horizon, however, and if the small amount of footage I’ve seen is any indication, Fantastic Mr. Fox is less a catastrophe than just the forgettable lull before a glorious upswing.

10 thoughts on “A Wes Anderson Primer”