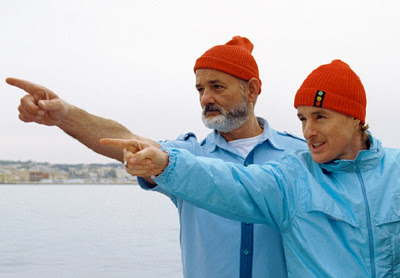 In May, I did this. It was just one post for my Wes Anderson Month project, but ever since then, a larger idea has been haunting me. After all, if it was so much fun — and so self-enlightening — to write such an exhaustive piece on a single scene from The Life Aquatic With Steve Zissou, why not do the entire film?

Unquestionably the concept owes great debt to Fred Clark’s page-by-page trot through the Left Behind series, but, of course, I like The Life Aquatic.

Actually, that’s not really true. I adore The Life Aquatic. It almost immediately became my favorite film when it was released (Christmas of 2004), and it’s had a firm grip on that top spot for me ever since.

So, after much deliberation, I have indeed decided to deconstruct every scene, in sequence, from The Life Aquatic With Steve Zissou. Whereas Fred does a great job of pointing out absolutely everything those books get so appallingly wrong, this will be more of a celebration. It’s a film I love. It’s not without its issues — and we’ll certainly discuss those at the appropriate times — but it’s a chance for me to immerse myself (and a chance for you to immerse yourselves) in a brilliant and misunderstood film.

Join us here on the first Saturday of every month for Steve Zissou Saturdays. We’ll be working through the film in sequence, and I’ll be rewriting my earlier piece slightly to fit in better with this project. Likely that will be the second or third post in the series, so it won’t be long until we have uncharted waters ahead.

I planned on using this post to explain things…to give an idea of what to expect, and maybe even to summarize what I hope to get out of it.

But you know what? Let’s not think too much about it ahead of time. This is an adventure, after all, so let’s just see what comes.

For now, I’m going to go on an overnight drunk, and in 28 days I’m going to set out to study every scene from my favorite movie of all time, and dissect it.

Anyone that would care to join me is more than welcome.