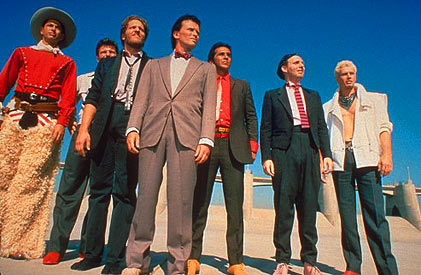 I do know that its full title is The Adventures of Buckaroo Banzai Across the 8th Dimension but that was too long for WordPress.

This is a movie I’ve been meaning to get around to for some time. Mainly because it immortalized in film Yoyodyne, the shady corporation known to literary geeks like myself from The Crying of Lot 49. That means that this film is one of very, very few that could possibly be said to take place within the same universe as any of Pynchon’s works, and that’s worth a recommendation in itself. As an added bonus, one of the characters employed there in Lot 49 was first introduced in Gravity’s Rainbow, which itself featured a character whose ancestors we meet in Mason & Dixon, a-and…I’ll stop myself there, suffice it to say that this indirectly ties the film not just into one of Thomas Pynchon’s books, but — by virtue of intratextual connectivity — the entire Thomas Pynchon oeuvre.

Of course, none of that factors into the plot here, which finds Buckaroo Banzai driving through a solid mountain, only when he comes out there’s a sort of alien fetus attached to the underside of his car, but that can’t be very important because it never comes up again. So the President of the United States calls him up to congratulate him on finding the alien fetus or something but it’s not really the President…it’s an alien from a race that wants to destroy Earth (and doesn’t live inside of mountains so I guess it’s a different alien species to the alien species that includes the alien fetus Buckaroo found on the underside of his car, which makes sense because if you destroy Earth you destroy those mountains AND THEN WHAT). But these aliens that prank called him don’t actually want to destroy Earth, they’re exceptions to the rest of their species, so they electrocute Buckaroo through the phone line and make him write equations on his hand. I have no idea what I just watched.

There’s also, of course, the Wes Anderson connection, and as Steve Zissou Saturdays kick off next weekend, I thought it would be worth seeing the film from which Anderson borrowed the end credits sequence for The Life Aquatic.

He also, I can see now, borrowed the electrical kiss from this film for Moonrise Kingdom. I’m glad he borrowed these things, because I can understand them in their reappropriated contexts. Here, I have no idea what I just watched.

Buckaroo and his band / fellow spies / sex people have to stop the aliens before they destroy Earth, which all started because a long time ago John Lithgow got flung through a wall by a go-kart, obviously. Christopher Lloyd is one of the aliens and that’s about the only thing that makes any kind of sense to me.

And while Buckaroo is at a club playing that rock and roll that the kids love so much, he hears Ellen Barkin crying so he says ELLEN BARKIN WHY ARE YOU CRYING and she tries to shoot herself while he plays a sad song so she goes to jail and he lets her out, because I guess he has that authority as some guy from the 80s who plays Zeppelin covers at a club, and it turns out she’s the identical twin of his ex-wife, who died in some way that nobody cares enough about to explain. So he hangs out with her for a while and puts her in mortal danger, because the aliens can spit spiders and Ellen Barkin is wearing a dress.

Seriously, what the fuck did I just watch? Jeff Goldblum is in it, too, eerily foreshadowing his future roles in the film of anybody who thinks to ask him. He doesn’t do much apart from dress like a cowboy and say to Buckaroo something to the effect of I’M SORRY I DID EVERYTHING I COULD DO TO SAVE HER and then Buckaroo is sad and almost accidentally orders war with Russia, but it turns out she’s just fine so Jeff Goldblum was trolling him I guess. I have no idea, no idea, no fucking idea what I just watched.

If you have any idea what I just watched, please let me know in the comments.

Because I have no. Idea. What I just watched.

Next up: something I understand. Please.

2 thoughts on “My Week of Cleaning Out the Netflix Queue: The Adventures of Buckaroo Banzai (1984)”