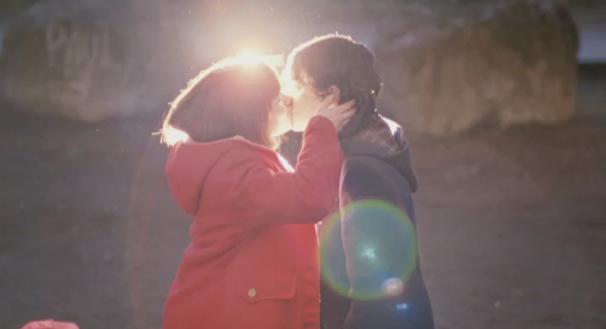 Richard Ayoade has been involved in some great stuff. The IT Crowd, AD/BC: A Rock Opera, and my probable candidate for funniest television show of all time, Garth Marenghi’s Darkplace. I was surprised to see that he directed a film, though, and would have been a bit apprehensive if the reviews didn’t all seem to conspire with one another to convince me that this was exactly the sort of movie I’d fall madly in love with.

And this was exactly the sort of movie I’d fall madly in love with.

Submarine plays games with cinematic grammar, with unreliable narration, and with basic plot and character development, but that’s not what’s impressive. What’s impressive is that it does all of these things in service of a sincerely affecting and bittersweet experience. If there’s one thing I’ve learned from reading endless volumes of modern and postmodern literature, it’s that absolutely anybody can subvert expectations. It’s a trick pulled so often that it’s no longer surprising. Not everybody, however, can utilize that game in the necessary service of a vaster emotional statement.

Submarine does this. And I don’t think I’ll be forgetting it soon.

The film is about Oliver, a teenage boy living in Wales, who finds himself drawn to the crude, nasty beauty of a female classmate as his parents’ marriage disintegrates in the background. But it’s not the plot that holds the film together…it’s the sensibility. It’s the appropriately confused nature of the film, which glorifies the enormity of youth while never losing sight of its fleeting, graceless unimportance. Oliver is prone to flights of internal fancy that border on outright hallucinations, muddling so often the line between imagination and reality that one of the film’s biggest shocks comes after a scene in which he reads aloud his suicide note to the class…only for us to learn in the following scene that, for once, this was not imaginary.

The object of Oliver’s affections is Jordana, a dangerous and equally disturbed young woman who torments her peers and delights in setting fire to things. She brings out the worst in Oliver by mere virtue of existing, and an early, gorgeously-presented moment in the film finds Oliver bullying an unfortunate girl in order to impress Jordana and another friend of his. But then his friends leave and there’s just Oliver, his victim, and silence. Without changing a thing, the entire perspective of Submarine shifts, and it’s a perfect film-defining moment that haunts Oliver in ways he can’t ever understand.

As Submarine progresses Jordana finds her own life injected suddenly with a malign tragedy, and we see at times from that point forward an outward reflection of her own humanity. As we plumb the depths of Oliver’s problems and erase, letter by letter, our perception of his innocense, we find Jordana assembled, piece by piece, to something like a sympathetic human being. Both Oliver and Jordana are rich, challenging characters, but we start at the opposite end of each’s spectrum, and work backward toward the middle, where, with luck, they might finally meet, and be for the other what they each most need.

Submarine is an unquestionable delight. Beautifully flawed, and devastatingly frank. There are no good people, apart from Noah Taylor as Oliver’s milquetoast father…but he gets steamrolled by everything life puts in his path.

It’s funny. It’s sad. It’s heart-breaking. And I loved it.

Next up: The one with that character who needs to accomplish something.