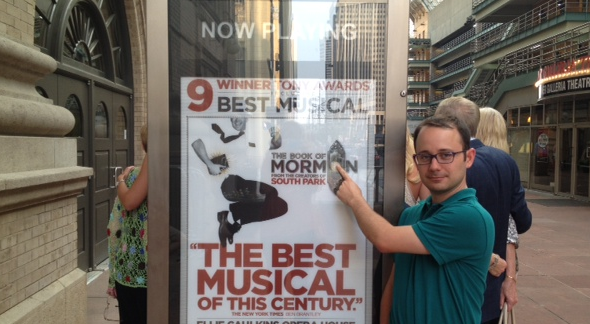 My girlfriend was kind enough — and lucky enough, but mainly kind enough — to get us to tickets to see The Book of Mormon on opening night here in Denver. I was unquestionably excited when she got the tickets, but if she hadn’t been able to get them, I wouldn’t really have felt disappointed.

After all…it’s The Book of Mormon. Matt Stone and Trey Parker are absolutely talented individuals — as well as genuinely gifted showmen — so I knew it’d be fun to watch, but the subject matter sort of rubbed me the wrong way.

Having seen the play, I think I now understand it. Matt and Trey don’t pick on Mormons because they want to upset them, or because they dislike them, or anything along those lines. They pick on them because, in their minds, Mormons are the religious equivalent of a bad horror film. In Mormonism, they feel, the acting is bad, the story is full of holes, and the set pieces are unconvincing. And that’s exactly why they love it.

There’s a level of inescapable affection for the religion, even though they’re quick to point out the problems with it. “All About Mormons” was relentless in its criticism of Latter-Day Saints history, but in the present day Matt and Trey had nothing but good things to say about the actual family of believers. They didn’t turn their Mormon characters into strawmen; they portrayed them as good people who were polite, family-oriented, and community-minded. That’s all good. The undercurrents of their belief system may not hold up under scrutiny, but “All About Mormons” suggested that it didn’t have to. If it made you happy, and if — in whatever way — it made you a good person, then that wasn’t a bad thing. It may not be a factually sound thing, but it wasn’t a bad thing.

The Book of Mormon, perhaps to avoid overlap with that episode, is willing to explore the other side. While “All About Mormons” painted a portrait of good people living a selfless life, The Book of Mormon shows us the passive self-righteousness and willful delusion that may be inherent in such a lifestyle. This could be taken as insulting by actual Mormons, I guess, but in order to be insulted they’d have to block out a substantial portion of the play — say, all of it — as Matt and Trey are careful to put all of the worst things into the mouths of two main characters who emphatically are not meant to represent the religion as a whole.

These two characters are Elder Price and Elder Cunningham. Elder Price comes across as a young man who doesn’t feel he has anything to learn. He not only knows it all, he’s mastered it all, and is also capable of teaching it all. In fact, he deserves to have it all. He is, he’s convinced, the rightful center of everything, as exemplified by the early musical highlight “You and Me (But Mostly Me).”

Elder Price’s issues are his own, and not endemic to the rest of the Elders and Sisters we meet throughout the course of the play. In a word, Matt and Trey are satirizing Elder Price’s psychology far, far moreso than they are his religion.

Elder Cunningham is Elder Price’s opposite in every way. Squat and dumpy, boisterous and lacking confidence, it’s Cunningham’s journey that really resonates. Elder Price, as you might expect, must learn humility. Elder Cunningham on the other hand has a more complicated role: he’s prone to fabrications, and is unfamiliar with the contents of The Book of Mormon. It’s not a spoiler to say that these things will come into play together during the course of the evening…it’s downright essential that that happens. But when it does, it happens in a way that’s both hilarious and oddly moving.

Price and Cunningham are paired up in the Missionary Training Center, and sent to Uganda…the first (and second) of many disappointments for Elder Price. There they find themselves immersed in a culture they neither understand nor wish to understand. After all, they are there to spread their gospel, not to take anything home in return. The play really does write itself from here, and in a narrative sense there’s very little in the way of surprise. In a comedic sense, however, it’s positively bursting, so I won’t ruin any (or many) of the jokes by repeating them here.

The comedy, as you might expect, is where The Book of Mormon shines. The music, of course, is as brilliant as well. The aforementioned “You and Me (But Mostly Me)” is a rightful earworm, but the crowning achievement has got to be “Hasa Diga Eebowai,” based on an expression the Ugandans repeat to help their through their troubled times. (“Does it mean no worries for the rest of your days?” asks Elder Cunningham. His guide’s response: “Erm…kind of.”)

There’s also the insightfully pornographic thump of “Baptize Me,” which is a one-joke song that spirals gorgeously out of control, and the instantly unforgettable “Turn it Off,” sung by a chorus of missionaries. It’s this song that introduces the play’s truly greatest accomplishment, Elder McKinley. McKinley’s repressed homosexuality never becomes so overt that it loses its edge, and it also gives the character a genuine sense of sad humanity. Elders Price and Cunningham may both have issues bubbling below the surface, but Elder McKinley seems like he’s dead inside, that his soul has been smothered by a lifetime of fighting the truth of who he really is. The actor who played McKinley, Grey Henson, received the loudest applause of the curtain call, and that was well deserved. He found the heart beneath the comedy, but never let the comedy drop. He’s absolutely this play’s buried treasure, and wears a hollow smile like very few actors can.

As Elder Price, Gavin Creel had absolutely the right amount of smarm and superiority, but his role, unfortunately, never gets much more complicated than that. Jared Gertner as Elder Cunningham has a lot more to work with, especially as he unknowingly delivers what may be considered the moral of The Book of Mormon: there is real benefit to having a comforting fiction.

And that seems to be what Matt and Trey are saying here. South Park has always had a moral center, as outlandish and sometimes brutal as its comedy can get. And in The Book of Mormon, though we’re always being asked to laugh, they can’t help but develop a solid, redeeming theme for the characters and the audience alike: it doesn’t matter what you believe, as long as it makes you a good person.

But if it makes you a good person, keep on believing it. Because we need more good people, and we need to do less worrying about how they got that way.

Check it out if you get the chance to see it. And if you do see it, I’d love to know what you think.

2 thoughts on “Review: The Book of Mormon”