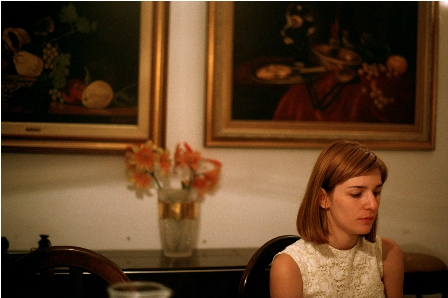 So ends my week of cleaning out the Netflix queue…and what a way to go. Dogtooth is a genre hybrid, a coming-of-age tale crossed with lingering, shivering horror. It’s a story told between extremes…one where we don’t know the beginning or the end, but whose middle is open to us and lets us know that its beginning and end are being withheld as an act of mercy.

The film is a relentless hour and a half of Hell. A family is held on some remote estate by its patriarch, who keeps his children in a state of fear so constant and extreme that they dare not set foot off their lawn for fear of being killed by creatures unknown.

Their mother is complicit in this scheme, though it’s unclear why. She has knowledge of the outside world the likes of which her children will never know, but agrees with her husband that it’s best to keep the children confused, ignorant, and in abstract terror at all times.

They feed their children misinformation to keep from developing as human beings. This ranges from lying about the simple definitions of words to larger, more loaded deceptions…such as when the father comes home covered in blood to report that their nbever-seen brother has been killed by dangerous creatures because he disobeyed orders. The children are forced to deliver eulogies for this boy who never existed, and learn — as far as their father is concerned — a valuable lesson in the process.

We encounter this cruel and unexplained social experiment at the very point that it begins to fray. The children begin to behave monstrously toward each other, lashing out with knives during minor disputes. The son spies a stray cat on the family’s property, and guts it with hedge trimmers in case it’s one of the dangerous creatures they’ve been warned about. And a woman who is brought to the home to service the son sexually inadvertently triggers something in t leads the children to explore their own sexuality with each other.

It’s unflinching and difficult to watch. The camera has a habit of lingering long after we’d wished it would turn away, but that’s an important part of the experience. Great films know what to leave to the audience’s imagination, but Dogtooth knows that these things cannot be left to the imagination. That, in this specific case, the imagined horrors can never live up to the reality. And so you see every last terrible thing.

There’s very little story to Dogtooth, but it’s a powerful and cohesive experience, one which raises a wealth of questions about parenting, about childhood, about family, about society, about truth, about perception, about relativity, about love, about responsibility, about identity, and about knowledge.

It answers none of those questions. In fact, that might be one of the film’s themes as well: questions are deflected, deferred, or answered with a deliberate lie. Like the nameless patriarch of the anonymous family, Dogtooth doesn’t want to give us answers. Unlike the patriarch, it can’t stop us from discovering them on our own.

Next up: Nothing. The series is over. My regular schedule of not posting anything ever shall now be resumed.