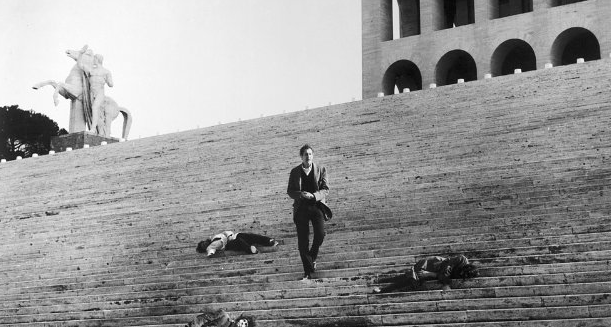 This is one I’ve been wanting to see for a while, and I definitely enjoyed it. Vincent Price is predictably fantastic as the titular Last Man, and it’s a delight watching him simply go about his day. Radioing for help, seeking out fresh garlic for the front door, clearing corpses from his yard and dumping them into a pit…post-apocalyptic New York is a lonely place, and Vincent Price has been trapped there, alone, for three years.

It’s taking a toll on him, but he moves forward. Humanity has been decimated by the very disease he was once working to cure…but now it’s too late. Even if he finds a cure, there’s nobody left to give it to.

He spends his days collecting food and survival gear from abandoned supermarkets, but he’s careful to take only what he needs. Inside he still harbors the hope that somebody, somewhere, must have survived, and he doesn’t want to consume all of the resources himself. It is with this small act of self-restraint that he hopes to provide that phantom pocket of humanity some hope. What’s more, he even makes daily sojourns through the city, methodically slaughtering the deranged mutants as they sleep, just to make the streets a little safer for anyone else who might have to cross them.

If this sounds similar to Charlton Heston in The Omega Man, there’s a reason for that: they were based on the same book. The Last Man on Earth, however, is exponentially better. Granted, the mutants never register as much of a threat here, but the ones from The Omega Man were even less frightening, with their religious-cult overtones and and 1970s souped-up MonsterMobile. The same book was also adapted into Will Smith’s The Last Man on Erff…I mean I Am Legend. That’s a good number of high-profile adaptations for a single text, and in this case the first was probably the best.

For starters, it has a not unforeseeable but still quite brilliant (and Twilight Zone-worthy) twist to Price’s actions that The Omega Man doesn’t have, opting instead of a graphic interracial fuckfest because that’s definitely what we expect from a story about the last human being alive. I Am Legend ditches both of these developments…for all I know, as I haven’t actually seen it…presumably in favor of having Will Smith rap with some mutants, while they all wear nice suits and sunglasses.

The Last Man on Earth interestingly contains a flashback sequence of film-dominating length at its center, which shows Price and his wife and daughter living out the last days before the plague hits America. As might be expected, the death and devastation being felt by Europe at the time feels distant and impossible here in America…until we flash forward, and see his little girl and the woman he loves falling victim to it in turn. Price himself is immune, but all that means is that he gets to watch everybody he’s known and loved die before him.

There’s a particularly lovely moment in the film when Price comes across a stray dog, alive against all odds in the wasteland. He lets the dog into his house and is so excited by the prospect of company that he launches immediately into promises of all the fun things they will do together…only to find out that the dog has been wounded, and is infected with the virus. Cut to the last man on Earth burying a small figure in a shroud with a stake through its heart, and a figurative one through Price’s as well.

There’s more I could say about it, but I won’t spoil it in case anyone out there wants to watch it. It’s early-ish Hollywood horror, so don’t expect to have nightmares over it or anything, but there’s an enjoyable story with a wonderfully conflicted central character, and it outlines perfectly valid arguments about perspective and intent. It’s certainly better than watching Charlton Heston fumble with boobies, or Will Smith and the mutants teaching Carlton how to dance.