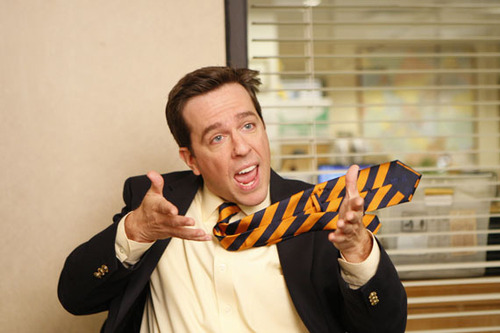 Whenever the characters sing, take a sip.

If dancing is also involved, take a bigger sip.

If the group of singing and dancing characters includes those who are absolutely not the kinds of people who would sing and dance at work but are being forced to because someone wrote it to kill four minutes of screen time, finish the glass.

Whenever we are reminded of the poor financial shape that the company is in, take a sip.

Whenever a new employee is hired on in spite of what we’ve been told about the poor finiancial shape that the company is in, take a bigger sip.

If that new employee’s hiring is redundant because there is already a character on the show doing that job, finish the glass.

If that new employee now hangs around in the background or off-camera of every episode without being given anything to ever say or do by the writers, smash the glass on the floor and rub your face in it.

Whenever you feel pity for the remaining talent on the show which is forced to perform these scripts, take a sip.

Whenever a character you once enjoyed tells a joke you heard on Two and a Half Men four years ago, take a sip.

Whenever the show steals a setpiece from its UK counterpart and Americanizes it by adding farts or two sexy people making out, finish the glass.

Whenever you find yourself laughing more at the between-acts Geico commercial, take a sip.

Whenever the previously fruitful dynamic between two characters is permanently neutralized by an unnecessary plot development, take a big sip.

Whenever a character you haven’t seen in a long time makes a cameo and excites you because you like that character, take a sip.

Whenever that character says nothing funny whatsoever and you can’t believe they’d bring him or her back just for that, finish the glass.

Whenever somebody says or does something that would get them fired or arrested, even though they know full well they are being filmed as they do it, take a tiny, tiny sip. (Volume adjusted for frequency.)

Whenever two characters kiss, consume one molecule of alcohol. (Again…)

Whenever those are two characters that really can’t be kissing without retroactively damaging everything we’ve been told about them in the past, gently introduce a small quantity of alcohol to the tongue with a medicine dropper. (And again.)

Whenever the show spends 20 minutes building toward a narrative payoff that doesn’t come, take a big sip.

Whenever you realize that that payoff doesn’t come later in the season either, and the writers just got tired of the plot strand before giving it a proper resolution, finish the glass.

Whenever you remember that you used to enjoy this show, take a sip from your glass of tears.

Whenever somebody tells you that this show was never as good as the original Office, and just seemed a lot better than it was due to a now-missing charisma and genuine chemistry between cast members who are now so tired of the work they’re doing that the scripts can shine through as the shit they really are, hug that person, because he loves you enough to tell you the truth.