On the third day of Christmas, Ben Gallivan gave to us… 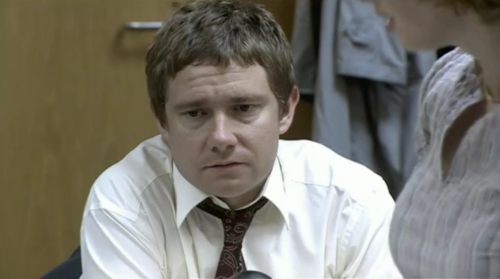 Now, before we start, we’re not talking about the comparatively sub-par offering that the US series of the same name produced. Granted, I know that the show’s principal writing team were also behind it – but to me it just didn’t transfer as well as it could have so I am writing this as a purist; it isn’t bias, it is plain common sense. In all honestly, I am not totally aware if there was an American edition of the Christmas specials of which you will hopefully be reading more of but even still, I would imagine that the emotion shown by each and every single character (and therefore actor, because that is how The Office works) outshines anything that Mr Carell & Co would have the chutzpah to even try and replicate.

In January 2001 a BBC documentary crew filmed the everyday goings on in a typical workplace. Now, nearly three years later, we return to find out what has happened to the employees of…The Office.

In the opening scene, we find David Brent – late of Wernham Hogg – reflecting upon his time as manager of the eponymous office and proclaiming himself not to be “a plonker.” For my American readers, of which I am sure outnumber my friends and family that I will undoubtedly send the link to this over-indulgent synopsis, a “plonker” is an idiot, a numbskull, as vividly portrayed by Nicholas Lyndhurst as Rodney in erstwhile Xmas favo(u)rite Only Fools and Horses. As a brief side note, the show is no longer limited to prime-time Christmas viewing, having been repeated for nigh on 30 years and has lost a little of its original spark. Such is life.

Things have changed at Wernham Hogg; Gareth Keenan is now in the boss’ chair, prompting almost unwatchable exchanges between the former and current residents. Tim Canterbury – sadly, but almost predictably – has moved sideways rather than upwards and still finds himself under Gareth despite his promise in the earlier series, we find that he has gotten nowhere. Even the “new Dawn” doesn’t get his taunting of Keenan – making his life even more of a misery than usual.

Exchanging (un)pleasantries with local grocers, selling chamoix leathers to tiny offices – this is Brent’s life now. Travelling up and down the country selling tampons to anyone who’ll have them. The tables have most definitely turned compared to the series proper; the embarrassment doesn’t come from Brent’s own faux pas anymore (well certainly not as much anyhow) but from how quickly his life has turned around for the worse. Most notably surprising is how he is treated by Gareth. Whilst filling out the internet dating form for Brent, Gareth frequently teases him about his appearance and age and general life at the moment. When pressed to explain where he has been travelling, Brent pathetically suggests Hull; “Well I had to travel to get there, it didn’t come to me; Oh look here comes Hull down the motorway in a car.”

Even his sarcastic remarks have become feeble. 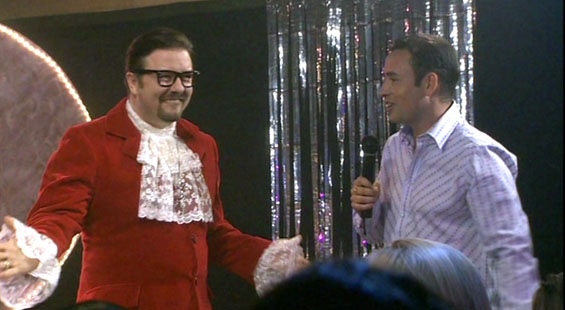 Brent obviously sets himself up for these things. Who else would spend £40,000 compensation money to record a single that is certain to go nowhere? Who returns to his old place of work on an almost weekly basis to “keep up morale?”

Brent’s turnaround is the main focal point of the first part of the Christmas specials. The office Christmas party is the sub-story which gets a look in every now and again (the agenda scene being a particular delight) and some really uncomfortable moments that were one of the keys to the show’s success; this time primarily in the form of Dawn and Lee’s “life” in America, full of bickering and screaming children.

The second part of the specials is more classic The Office than the first. The whole episode generally focuses on the lead up to and happening of the office Christmas party. Brent starts showing his former self again (despite being a picture of frustration and confusion) when it comes to choosing a date for the office Christmas party – after lying to Neil about actually having one. With Gareth’s somewhat limited help, we’re back on the internet dating scene and together they line up three possible women to be Brent’s date for the party.

To anyone who had up to that point been a fan of The Office, the likelihood that you could then “see what was coming” would be pretty high. This is classic David Brent territory; awkward, jerky and somewhat inappropriate conversations whether it is in front of a large group or as a one-to-one. In the first date, Brent somehow manages to steer the conversation towards breasts, seemingly within a couple of minutes of sitting down. The second date doesn’t even get as far as the two actually meeting, with the call – naturally conducted in a lay-by on a motorway – ending as soon as Brent’s potential date mocks the manager of The Office without actually realising she’s talking to him.

One of the most magical moments of the second part, however, is Brent’s visibly disappointed reaction to his third date. These three seconds are the three that I have no doubt rewound and played again and again. But essentially Brent is out of luck, and has to wait until the night of the party itself in order to meet his next date, Carol.

And so onwards…to the night of the party!

It is often said that if anything more was done with the UK version of The Office then it would be ruined entirely and that is because of the genius of the final scenes of these Christmas specials. In many ways, it brings us back to square one; the only difference being that Brent ends up happy and we – well most of us – feel happy for him, despite the years of him making us chew on the backs of the sofa in horror.

Carol – David’s date – turns up and they hit it off immediately. They are seen laughing and joking either on camera or off it. The return of Dawn (not so much Lee) is the highlight of Tim’s year, not because of the possibility that she could be the love of his life, but also because they can taunt the still-oblivious Gareth about his life in the Territorial Army (and the homoerotic connotations that this has). They’re partying like it’s 2001 all over again. But then come three moments of genius that make this special live up to its billing. 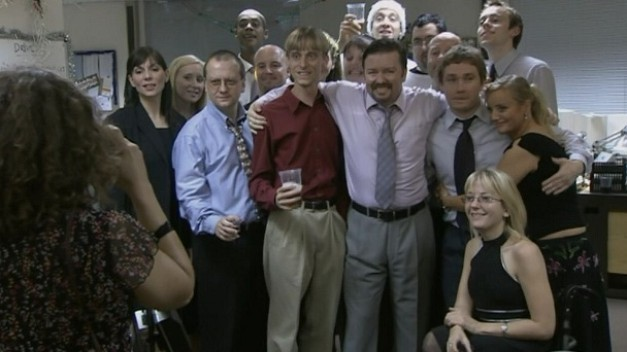 Brent vs Finchy: Well it had to happen didn’t it? The obnoxious Finchy’s endless taunting of Brent finally comes to a head at the party. After years of pandering to him and laughing off any insults, the one directed at his new flame hits hard. “Why don’t you fuck off?” are words that Finchy doesn’t hear very often – and certainly not those expected to come from Brent – and it shows.

Tim and Dawn: Well it had to happen didn’t it? But did they have to do it so well that it can make grown men weep? At first, you think it’s all over; Lee drags Dawn away once he’s had his fun, despite Dawn obviously having a great time with her own friends. Lee is a dick – no change there; even I could have written his lines for these specials. He is sleeping in the front of the taxi when Dawn opens her Secret Santa gift. It’s an oil painting set from Tim – accompanied with a sketch that she’d drawn of him a day earlier with the words “Never give up” written on the back. She leaves Lee, she goes back to the party, she kisses and leaves with Tim. Sorry for the brevity, but I need to go and mop up the tears.

David Brent funny?: And so the party ends with everybody in high spirits (or high, and drinking spirits) when Brent gate-crashes the photo taking and asks for a picture of just him and the “old gang.” He plays the fool, as he does but something is different this time. He makes them laugh.

And everyone thought he was just a big pair of tits.

Tomorrow: A yuletide adventure spanning seven years and one apocalypse.