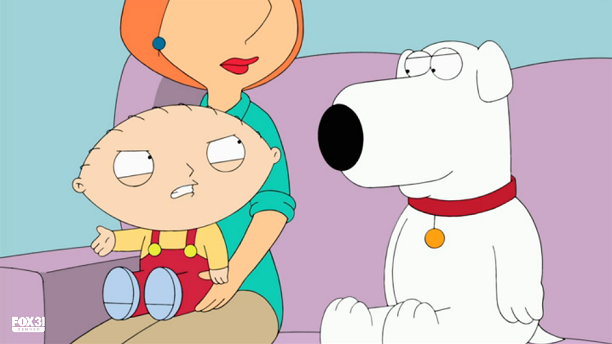 I don’t like Family Guy. You know that already. But it does, at times, manage to make me laugh. Other times it manages to insult me as a writer. With the episode “12 and a Half Angry Men,” it managed to upset me as a human being.

Now this isn’t a matter of taking offense at an off-color joke. That happens too (seriously, Family Guy, I know you find sexual assault and domestic violence to be inherently hilarious, but is it too much for you to at least try to make a joke about these things instead of just putting them on display and assuming I find them inherently hilarious too?) but in this case it was more an example of problematic cynicism, and one that’s potentially damaging to our cultural mindset.

The episode is about Mayor West being on trial for murder. The jurors all see it as an open and shut case, apart from Brian who holds out for a not guilty verdict. As might be expected he gradually sways the other jurors to his viewpoint and Mayor West goes free. Family Guy certainly wouldn’t be above suggesting that Mayor West actually did commit the crime, but I think it’s safe to say that, within the reality of the episode, he didn’t, and Brian and the others rendered a fair verdict.

However at the end of the episode, the following exchange occurs:

BRIAN: It was a pretty intense experience, but the important thing is that, in the end, justice was served.
STEWIE: All you did was let a guy go. There’s still a murderer out there.
BRIAN: Yeah but we saved an innocent man today. That’s something to feel good about.
STEWIE: Feel good about? They found eight more bodies last night. One of them was on this block. There’s a maniac out there. He’s cutting people’s power off, breaking into their homes, and slitting their throats.

Stewie continues his rant, and the episode illustrates, ultimately, that Stewie is correct. There is a murderer on the loose, and Brian shouldn’t be proud of what he accomplished. And here’s the thing: that mindset of Stewie’s, which is clearly endorsed by the episode, is a vastly destructive one.

It’s important to note the context of this exchange, which is just the latest in a long line of “let us spell out a ridiculous thing about that genre convention…” gags. Family Guy likes to poke fun at form…playing it straight (relatively) for a time, before stepping back and saying, “But wait a minute…why did that happen?”

In this case, “Why did that happen?” refers to the deliberations being seen as a success, when, ultimately, the crime remained unsolved. See what’s wrong with that? Just typing it out gives it away: those are two different things. Related, sure, but separate. The deliberations are not the criminal investigation. The jurors do not and cannot catch the bad guy. That’s not their job. That’s not what they should be doing.

Okay, fine. A mindless gag at the end of the episode that thinks it’s being clever but is actually just irrelevant. Except that I then began to see reviewers being convinced of Stewie’s viewpoint, such as in this example from The A.V. Club:

“And Stewie points out what never seems to get highlighted in all these stories: if Adam West didn’t do it, there’s a murderer still on the loose. There are more bodies. And taking too much pride in swinging a jury takes a lot of credit for what amounts to simply letting a guy go.”

It’s not “simply letting a guy go.” Conflating the role of a jury with the responsibility of cleaning up the streets is a bad thing. It’s not a clever insight, and it’s not a problem that someone takes pride in preventing an innocent man from going to jail.

In cases like this — both real and fictional — there are two things at play. (I’m assuming here that a crime was actually committed, which isn’t always the case and can therefore complicate things even futher.) One: Someone committed a crime. Two: Someone is on trial for committing that crime.

Those two things cannot be seen as the same thing. If you don’t understand the separation there, then you’re playing the wrong game. And that’s a problem.

The jurors are responsible for item two…and not at all for item one. They don’t go searching for the criminal…they assess the testimony of the defendant. That’s all they do.

Granted, I have some personal feelings on this subject. And maybe that’s why this felt so bothersome to me. But pull those out and you’re still left with a pretty clear logical conclusion: each group of people involved in this case has a job to do, and it’s the jury’s job to do theirs, only theirs, and to do it the right way.

There should be a sense of pride associated with finding someone not guilty when there is not sufficient evidence of their guilt. Because that’s doing the right thing. That’s being human. That’s taking another man’s fate into your hands, and being responsible with it.

Yes, if you find the man not guilty then that means there is still a criminal out there. But that’s not the issue the jury was assembled to address. We have a police force for that. The fact that you found a man not guilty does not mean you’ve let the world down and failed to do something constructive. You’ve prevented a potentially innocent man’s life from being ruined, or ended. Isn’t that about as constructive as one can get?

Take Stewie’s concern to its (tellingly) unspoken conclusion. He harps on Brian because Brian did nothing but “let a guy go.” So it would have been better for Brian to not let him go?

What then? Mayor West still didn’t commit the crime, which means the criminal would still be out there, racking up bodies. But it would somehow be seen as more constructive for a man to be imprisoned than not? Just so we’d have something to show for it?

Stewie often serves as a voice-box for the writing staff. Part of his role as a character now is to point out these logical inconsistencies. But that’s a role that’s far too prone to cynicism, and it’s important to not let that drift too far along, lest you lose your humanity along the way.

This isn’t an “inconsistency.” Brian didn’t “just let a guy go.” And nobody should feel unproductive for doing the right thing…even if that one right thing leaves another wrong thing unaddressed.

I guess it’s easy to play with fate as long as it’s somebody else’s. But something tells me if a member of the show’s writing staff were on trial for a crime he didn’t commit, and he was found not guilty, he wouldn’t see that as a problematic inconsistency. More likely he’d be grateful that somebody did see to it that justice was served, and I truly doubt he’d be saying with his own voice what he already said here with Stewie’s.

Because he’s one man, and the criminal is another. Their fates are not, and should never be, tethered together. If your cynicism is causing you to bind them up…then I think you’re long overdue for some serious soul searching. That’s not the world you live in. And you should be very happy about that.

10 thoughts on “Stewie Griffin and the Problem of Cynicism”