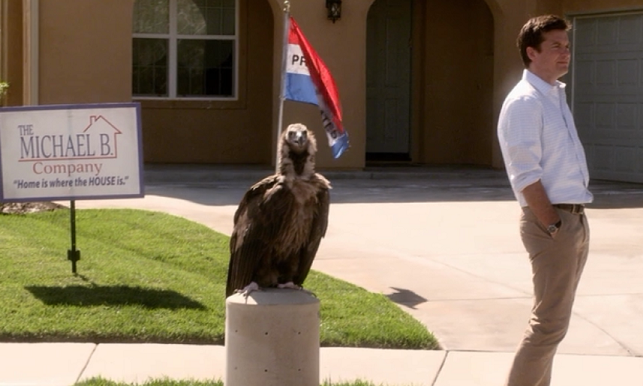 I don’t know if I like this season of Arrested Development. Of course, I don’t know if I dislike it either. As I write this review of the first episode, I’m only halfway through the batch. This has given me, I think, an interesting vantage point: I’m far enough along that I get a sense of what the season is trying to do, but not far enough along that I know how it pulls everything — or fails to pull everything — together.

What I do know is that this season — with its unique structure, twisting timelines and gradual plot reveals — had the potential to be the best one yet. It isn’t.

A lot of this is due to the simple fact that Mitch Hurwitz couldn’t get the cast’s schedules to align. (There were reportedly some budgetary setbacks as well but I don’t know anything about those.) Without the ability to get every actor in the same room at the same time on every day of filming, Hurwitz splintered his narrative. In one episode we’ll see what GOB is up to, in another we’ll check in with Lucille, and of course we’ll circle around and see what wacky Uncle Tobias has been doing as well.

While this sounds gimmicky, the logistical fact is that it was this or nothing, and that goes a long way toward excusing it for even the most negative viewers. What goes the rest of the way toward excusing it is the fact that Arrested Development had an incredibly rich roster of characters in the first place. When you first hear that each installment will be centered around a different character, your reaction is probably skepticism that Character X can carry a full episode on his or her own. Then you stop, think for a second, and realize that any character in this show can carry an episode.

Arrested Development arrived more or less fully formed with its pilot. We got a sense of who everybody was, and also a sense of what got them there. The fact that they then spent three seasons evolving further was something akin to magic.

It would have been enough to keep them in stasis — they were certainly interesting enough as they were — but instead we got to watch them grow, or choose not to grow, and interact in fascinating ways as they each complemented and undermined each other’s goals.

The reset button was never pressed…sure, they’d eventually gravitate back to their comfort zones, but there was always a sense that everything that had happened along the way had really happened, and is now a part of their shared history. Of course, the narratives and sub-narratives that spanned multiple episodes meant that even as one character was returning back to center, there was at least one other plate spinning somewhere to keep up the illusion (…Michael) of forward progression. Long story short: it was good writing.

Which brings us to season four, which isn’t really able to rely on that formula. We have 15 new episodes, but only one plot…and halfway through the season I couldn’t spoil it for you if I wanted to, because I still don’t understand it. That’s okay, or would be okay, as long as the individual episodes accomplish something along the way to stitching up the greater whole. Sometimes they do…other times they definitively do not.

“Flight of the Phoenix” is actually a strong contender for my favorite episode so far, largely because it raises an issue of its own, sees the consequences through, and then resolves them. That shouldn’t sound like much for an episode of television to do, but in light of what follows it feels like an achievement.

Arrested Development was always at its most impressive when it discovered some throwaway detail embedded in its past that, suddenly, could have a new and intriguing resonance. In this case, it’s Michael’s earlier threats to leave the family and run away to Phoenix. Not only does he do this at the end of the episode, but the fact that Phoenix (of any city in the country) was chosen for this detail in the past means we’re now treated to some great jokes about Michael attending notorious scam The University of Phoenix, as well as getting a subtle echo in the fact that the show itself has risen once again. It’s a great theme which gives the episode a sense of consistency that a lot of what follows doesn’t have.

Also working hugely in its favor is the father / son dynamic. Whenever I rewatch the original run, I’m struck by how wonderful the relationship is between Michael and George Michael. They love each other, but are constantly tripping over their own communication, shutting each other out without meaning to. I’m also struck by how unfortunate it is that that theme softened massively after season one. While I don’t think the show got worse when it charted zanier territory, it did leave less room for single-minded Michael and his awkward son to share quiet moments together…which, in turn, made the heart of the show that much more difficult to find.

Here it’s back in full force, and it serves a dual purpose: not only are we re-exploring the relationship between these two characters, but we’re being shown — more vividly than ever — just how delusional Michael is. George Michael has grown up, and he’s starting to see his father for what he really is. In what is unquestionably the most heart-breaking moment in the episode, we see that George Michael voted his father out of the dorm by starting to write “Dad,” but crossing it out and replacing it with the word “Michael.” It’s a rich moment that speaks silent volumes about how the dynamic has shifted, and Michael sulking out of the dorm is the ending the episode should have had.

Instead, however, we get a trip to the airport, a short flight to Phoenix, another flight back, and then a check-in at Lucille’s penthouse. It’s flab appended to what could have been a clean episode, and that’s a criticism I think you’ll be hearing a lot. Streaming on demand instead of airing in a rigid timeslot means Arrested Development has as much time as it needs to tell its story…but it also unintentionally reinforces the creative value of rigid timeslots: choosier editing.

Because these episodes have more room to sprawl, we end up with lengthy digressions and repeated jokes that overstay their welcome. We end up with scenes that would barely deserve to be retained as extra footage on a DVD. We have, basically, a lack of focus, and this works against the final product. That’s why we have the pointless scene with the twins, why Michael and George Michael have the same vague exchange about how the room sharing isn’t working (one single, tighter exchange would have packed a lot more punch) and why we waste so much time in laughless strategizing over who is going to be voted out of the dorm.

The flab is noticeable and absolutely on display, but in “Flight of the Phoenix” there’s at least a lot more going for it. The laughs, when they come, are solid. Kristen Wiig is unbelievably perfect as a young Lucille. The casual racism tossed around about tipping black people and investigating people in burqas is a bit left-field, but it’s at least funny and says something about the characters making those observations.

Best of all, however, we get to see Michael see through his vision of Sudden Valley without interference from or reliance upon his family. As it must be, it’s a total failure, and it’s great to finally see illustrated what had been so masterfully implied from the start: Michael may be the most capable Bluth…but that certainly isn’t saying much.

“Flight of the Phoenix” is a good episode, with a daringly dour atmosphere to position as the fourth season premiere. However it’s also overstuffed and doesn’t seem to have a sense of where its real narrative closure needs to be, nor does it seem capable of telling its great scenes from its needless ones.

From what I’ve seen, the balance is never really found…but it should still be an interesting ride.

Episode 1: “Flight of the Phoenix”
Central Character: Michael
Other Family Appearances: GOB, George Michael, Maeby*
Most Clumsy Reference to Original Run: “Loose seal.”
Scene That Most Needed Tightening: The vote planning sequence, which should have been about 10 seconds long and handled through narration. Instead it drags on for two full minutes, and is then reprised in the airport.
Best Line / Exchange:

MICHAEL: Maybe I’ll go to the real Phoenix and finish school. They’ve got one in Costa Mesa.

* Not counting the penthouse scene, which is returned to throughout the season, the younger version of George and Lucille played by different actors, or archival footage.