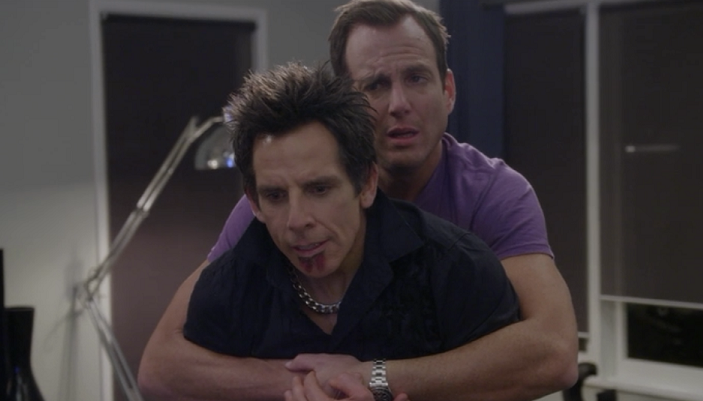 “Colony Collapse” was a flawed piece of television, but it worked well enough as a character sketch…as a method of plumbing what we knew of GOB Bluth and filling in some aspects of his humanity. It was also, overall at least, pretty funny, which is why it qualifies as a genuine highlight of season four.

“A New Attitude” seems dead-set on making up for that accidental success, and giving us a poorer, stupider episode about GOB that fits much more in line with the rest of the season.

One thing I’m noticing is that the second episode about each character is significantly worse than the first. “Flight of the Phoenix” was very much about the two most important things in Michael’s life (his son and his Sudden Valley project) and what it means when he botches them both, but “The B. Team” was about him being a movie producer and the straight man to some self-indulgent jokes about Ron Howard. (Wasn’t there also some simmering feud with Kitty, which was never mentioned again? Better not think about that…)

George Sr.’s first episode, “Borderline Personalities,” was about his relationship with Oscar, a construction project, and his latest scam business, but his second episode, “Double Crossers,” was about all the extra footage they had lying around that didn’t fit into other episodes…and also he becomes a woman.

Both Lindsay and Tobias had terrible first episodes, but their second installments still managed to be worse, which I guess qualifies as a kind of accomplishment.

Now we follow up on “Colony Collapse” with “A New Attitude,” which spends an awfully long and tedious time setting up the fact that GOB is going to pork Tony Wonder. Or vice versa. It’s not character work and it’s nothing to do with who GOB is as a person (one detail notwithstanding, and we’ll get to that in a moment)…it’s just something to laugh at, because gay sex is funny. I guess.

The one aspect of GOB’s personality that this does tie into is the fact that he doesn’t have any friends, and so when he has “feelings” for Tony, the narrator informs us that it’s friendship. GOB, without prior experience of this strange emotion, mistakes it for physical attraction. It’s a bit of a stretch, but it has its roots in a good idea, and it would have been far more affecting (and funny, and interesting, and clever, and everything else) had the two buffoons simply circled around each other this way, misunderstanding their own feelings, and confusing themselves about a romance neither of them actually wants.

Instead it ends with GOB and Tony buttfucking in the model home, so…nuts to that.

There’s a lot that this episode does wrong, and even more confusion that it causes, so I can’t even begin to touch upon everything. As far as the timelines go, either I’m very stupid or things got botched on the production end, because GOB makes an unwitting reference to Ann’s pregnancy before his wedding (something to the effect of “We had sex once and now she’s out to here!”) but here she says the child is Tony’s, because he slept with her after GOB ditched her at the altar. Could be a deliberate lie or mislead, but since I also don’t know why GOB still has the limo, what Michael does for Google or why we’re supposed to care at all about Herbert Love, the wall, or anything else introduced by season four, I’m happy to consider it some more sloppy writing and move on.

Then there’s the matter of Tony and Sally Sitwell, which a friend of mine astutely described as happening only because the actors are a couple in real life. There’s no narrative reason for them to be together, and far less of a reason for Sally to suddenly be a villain, embezzling from Lucille 2 as she twirls a non-existent mustache.

In the original run, Sally was a great (and wisely brief) addition to the show: she was a sweet, attractive example of what Michael could have if he let himself overcome his personal hurdles…as well as a comic reminder of how much of a child he still is. In the opening scene of this season she sees him at Cinco de Cuatro and makes a sarcastic comment about how she’s sorry she let him get away, and that works very well because it’s an immediate and biting acknowledgement of how far he’s fallen. Fine.

Now, however, forget all that…she’s just a scheming bitch. Once again, season four not only has no interest in building its characters, it actively wishes to dismantle the building done by seasons one, two and three. It’s disappointing, there’s no comic mileage in it, and — all together now! — it goes nowhere.

Speaking of going nowhere, we also get an interlude with Michael tearing up the movie rights in front of GOB, Lucille and George Sr., spouting off the little catch-phrase that couldn’t: “You’re outta da movie!!!!!” Can’t wait to buy that on a t-shirt.

So Michael spends the first half of the season or so collecting signatures for the movie, then the rest of the season ripping up the papers. There’s the germ of something funny there, but it doesn’t really land. I think I’ve figured out why: nobody actually gives a shit if they’re in the movie.

The one exception is Tobias, and that’s also the funniest “out of the movie” moment. After the debacle in Ron Howard’s office, Michael gets Tobias to sign the release. He then takes the paper and rips it up right in front of him. This is a funny moment, mainly because Tobias is so excited about it, and Michael gets a rightful moment of dickishness out of that.

In every other case, though, nobody cares. Lucille doesn’t give a shit, George Sr. doesn’t give a shit, and I don’t give a shit. It’s just one more example of season four keeping its balls in the air — so to speak — because it has no idea what else to do with them. There’s no destination in mind, no light at the end of the tunnel, and no conclusion or climax toward which we’re building. It’s a series of 15 episodes in which things happen, most of which aren’t funny and all of which are terribly boring, and then suddenly stop happening.

There’s also a pretty clear unbalance in these episodes, as we have four episodes left and all of them focus around characters we’ve barely seen so far. I think the season would have been better served by mixing them up a little better, so we don’t front-load certain characters and shrug off others entirely, and by limiting each character to one episode. I have nothing against devoting two episodes to somebody in theory, but in practice, the show loses track of what it’s trying to accomplish.

If it’s trying to accomplish anything at all.

TONY: You can’t tell a soul.
ANN: No one I know will care.

As I said. Bad episode.