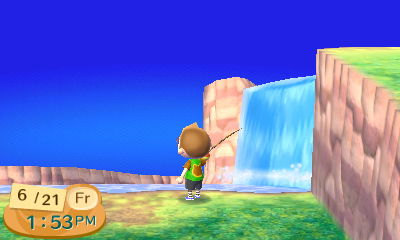 They booted it up one day and passed me a controller and helped me start a new character. I had no control over what my character would look like, and as soon as the game started I was responsible for paying off a home loan and making pointless deliveries to animal-people I didn’t know or care about.

That was the game. Also I had to be extra nice all the time to the animal-people or they’d move out and then, I guess, I’d feel bad about it. 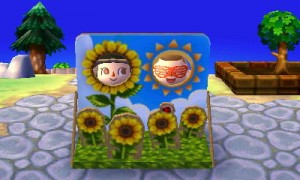 It didn’t click with me. I got nothing out of it. Again, it was a hugely popular game so I figured I just wasn’t cut out for it. There was no appeal. As Mario I could rescue a princess and as Link I could swordfight and as Olimar I could command armies…but Animal Crossing just gave me a dead-end job in a virtual town and that didn’t feel like enough of an escape from my dead-end job in my real town.

Flash forward to a few weeks ago, however, and I got Animal Crossing: New Leaf. I love it. Genuinely, truly, I think it’s a brilliant game. Even though, from what I can remember at least, it’s very similar to the game that left me cold so long ago.

Things change. Contexts shift. The world spins underneath you and if you’re not paying attention you end up in a different place altogether.

I’m in a different place altogether.

It’s what I need.

The game doesn’t just give you a virtual town full of virtual trees to shake and virtual clothes to wear and virtual bees to chase you around. 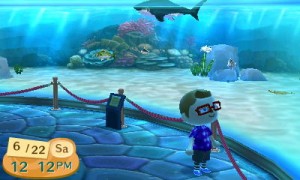 It gives you a place to breathe.

Does it sound sad that someone — anyone — would have to turn to a video game in order to find a place to catch their breath? I don’t think so.

We all need to find a place like that.

Other times it’s in a particularly insightful film.

Sometimes it’s in a conversation over a cup of coffee with somebody I care about deeply and may never see again.

This time, it’s digital. And it’s a world wherein I can rely on things.

Sure, I can hurt the feelings of the animal-people…but why would I? If I’m asked to deliver a package from the frog to the ostrich, I could keep it for myself…or I could follow through and get words of grateful excitement from her. The characters in Animal Crossing appreciate everything you do. They may only be characters…but that kind of appreciation always feels good.

Which is what impressed me about the game most of all. When I first started playing New Leaf I thought I’d go into it with ironic detachment. Why not? A silly little isolated village with its sunshine and rainbows and friendliness? Come on. So I named it Narcisso in tribute to the complex, layered deviousness of the central city in The Crying of Lot 49 and posted silly things on the town message board. 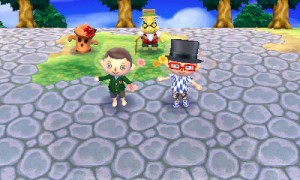 Because, without ever censoring me or pleading with me or forcing me to change my attitude…Animal Crossing changed my attitude. It disarmed me…

Go for it, the game said.

But while you do that…the rest of the characters will be over here. Enjoying themselves. And appreciating each other. And, well, being happy.

A lot of games struggle to keep players interested in doing good. They funnel you on a path toward the villain. They prevent you from sending profanity to friends. They oppressively lower your gun if you aim at a friendly character.

Want to piss off the aardvark in your neighborhood? Good. You can. But if you’re doing that…why are you doing that?

It’s a virtual town, as silly and pointless as that virtual, silly, pointless town I tried to enjoy years ago.

But I’m in a different place now…and the value of having a place to breathe — a town that will always have a place for me, no matter what — is immediately apparent to me in a way that it never was before.

It’s no substitute for the real thing. 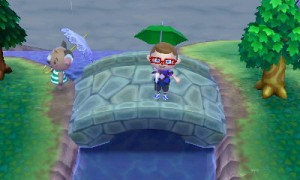 But it’s nice, sometimes, to visit a world in which comfort and appreciation are reliable aspects of daily life.

The sky is blue, the water is clear, and the dog plays guitar for you on Saturday nights.

Because, in reality, it’s not.

And as long as it’s yours, you might as well make it a great place to be.

One thought on “Animal Crossing: New Leaf is disarmingly disarming”