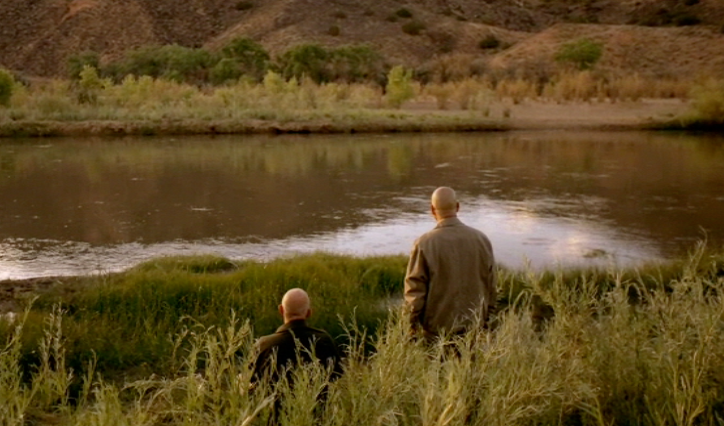 When critics want to convince their audience that a certain television show — or television event — rises above its peers, one word that gets tossed around is “cinematic.”

I understand what they’re saying…or what they mean to say. They are suggesting that television, even good television, is one thing. But movies? Man…that’s a whole other ballpark, and here is a show that can run with the big boys.

I guess I never really saw that distinction for myself. I don’t think of film as being an inherently “higher” artform than television. Both movies and TV shows have left me cold, and both movies and TV shows have moved me to tears. It’s all in the hands of the actors, and the writers, and the directors, and the composers, and everyone else involved. I wouldn’t say it’s a particular compliment to call a television show “cinematic.” Or, at least, it’s no more a compliment than it would be to call a great movie “so good it would make for a fantastic episode of television.”

Here’s where I’ll show my bias: I think a true complement to a television show would be to call it “literary.”

I say that because of its approach. Not its content, or its acting (though I’d have very nice things to say about those as well), but because of the way it layers and progresses its narrative. The way its details unfold in a way that actually feels like one sentence following the next.

Long, quiet stretches and deceptively brutal montages feel dense…like we’re watching a text play out but aren’t allowed to read it. There’s always a sense that even in its wordless moments, we’re being enveloped by narrative, by atmosphere…that we’re in the hands not of a writer or a storyteller, but an artist and a wordsmith.

I think this is because Vince Gilligan and his crew have managed to tell a story that functions exactly the way a great novel could. While episodes might have self-contained little narratives of their own (Walt chasing a fly, Jesse protecting a child, Hank being transferred to El Paso), they all function the way chapters would. They have their rising and falling action, their punctuations and their punchlines…but they layer. They reveal. They inform our readings of the other chapters, and they feel — for all their long, quiet stretches and moments of false relief — like important pieces of a greater whole.

It’s not a show you can parcel out. There’s no episode that truly stands on its own. A show described as “cinematic” might be easily broken into its spectacular component parts, but one that’s “literary?” No. No no no. That needs to stay together.

I’ve only recently caught up on the first half of the final season. The second half — the final chapters — will play out later this month, and I intend to review them. Why? Because this television show feels like the longest novel I’ve ever read, and it’s still one I don’t want to put down. But I know I must…because art is a statement, and statements end. And when it’s over: a long, quiet stretch. We can take as long as we like to think about what we’ve just seen. I get the feeling Walter White will not have the same luxury.

Breaking Bad feels literary because it’s unfailingly true to its own logic. While I wouldn’t describe the show as realistic, per se, I would describe it as relentlessly logical. Even now, as we tumble through these final moments, the characters are still dealing with repercussions of the very first episode. Nothing goes away. Consequences linger. The dead make their presences known. Details once so rigidly attended to now bubble to the surface, unseen.

I like that, because it provides a brilliant, ongoing tension that’s entirely earned by the show, and also because we never know when we’re going to see the same idea in a different light. In the article I linked to above — a discussion of the excellent “Peekaboo” — I talk about how Walter’s decision to cook meth gradually loses its own rationale: he needs the money to pay for his cancer treatment, but some old friends are willing to pay for it out of pocket. He needs the money to provide for his family, but he doesn’t stop when they have more than enough. His motives blur, almost visibly, but it’s only in this most recent batch of episodes that he explains why: he’s in the empire business.

It’s not about money, or drugs, or family, or cancer, or anything. It’s about pride, wounded decades ago, and what he sees as his first opportunity to earn it back. Walter is a broken man — there’s no surprise about that — but we’re still plumbing the depths of just how broken, and in what ways. And the fact that they can still pull this off, without re-treading ground or re-writing histories, is phenomenal.

I remember watching the first season and thinking that I didn’t like Cranston’s performance. Or, rather, I didn’t like one aspect of his performance: he seemed a bit too obviously broken. I saw a good man who was making some bad decisions, so I wondered why Cranston played him like a bad man making bad decisions. That was my first lesson to trust Vince Gilligan, and I haven’t stopped since.

And even now, toward the end, we’re not drawing limply toward a finish line. Breaking Bad is a story, a literary tale, and it continues to evolve right up to and through its final point. By his own hand Walter has lost Jesse and Mike…replacing them with Todd and Lydia, who are just competent enough for him to justify his decisions but flawed enough that we know what’s coming. It’s a ramshackle arrangement he’s built up around himself…and however tall he manages to get it, it’s only a matter of time before it all comes crashing down.

It’s a simple concept, and nothing particularly clever, but the way in which Gilligan and his crew pulled it off was just perfect. Jesse managed to be not only superior to Walter morally, but also intellectually as he’s the one who suggests the magnets and the train robbery while Walter is too upset to think straight. He blossomed into a more valuable member of the team than Walter could ever appreciate…and as soon as he did, he was replaced with Todd, who murdered a child in cold blood, and whose chief recommendation is that…well…he’s there.

And the cool, collected, calculating Mike…the one man who knows how both sides of the game must be played…is killed by Walter’s own hand. The moment that gun went off was an incredible one, played perfectly, Cranston’s face betraying the most genuine, “Oh shit,” he’s ever given this show, and for the first time he’s thinking it for the same reason as the audience. Now, with the last man who could have possibly navigated him to safety dead by the riverbank, Walter must turn to Lydia, another newcomer, easily shaken and prone to letting details slip unintentionally.

Walter had one world. He built another.

The madness of that small success encouraged him to knock out those supports and build another still.

His tower grows higher, but he’s using the wrong materials.

It’s a warped tale of hubris and fate…both self-manufactured and the kind that is thrust upon you. It’s the story of a man who could have a gentle associate killed just to make a point, and then chuckle fondly when he finds a reminder of that person.

And then, of course, leave it on the toilet.

Just in time for his DEA brother in law to find.

Right after swearing the life off forever.

It’s a novel. It’s a work of literary fiction.

Just because you finished the chapter…that doesn’t mean the chapter is finished with you.

All you can ask is that somebody shuts up…and lets you die in peace.

2 thoughts on “Why I Care About Breaking Bad”