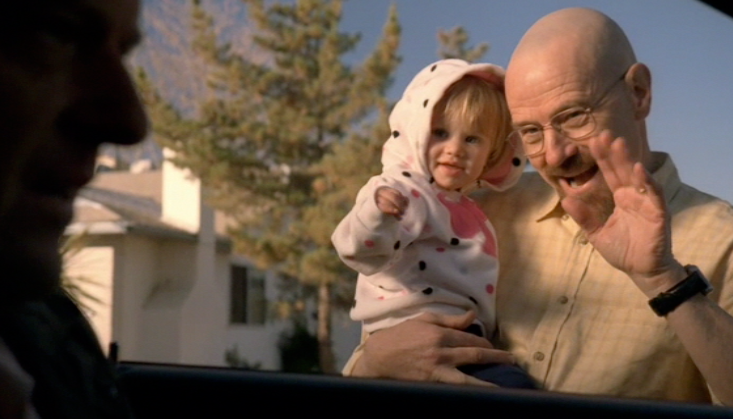 Breaking Bad begins (or continues…it’s debatable) sliding its pawns toward their final positions. “Blood Money” is the kick-off to this final batch of episodes, and it’s a strange one. So strange that I’m tempted to call it unsatisfying. Tempted, but I won’t, because Hank driving a long-overdue fist into Walter’s head would automatically make any installment of this show satisfying.

I think it’s the pacing that throws me off in “Blood Money.” Certain episodes (most notably “Fly”) deliberate, and allow deliberation. They take a small moment or set of moments, and revolve an entire hour of television around them. Other episodes (perhaps most notably “Gliding Over All,” which ended the first batch of season 5 episodes) skip quickly onward, showing us escalation in place of meditation. And most episodes, of course, fall somewhere in between…but “Blood Money” is the first time I’ve felt that I was toward one end of that spectrum, only to learn that we were very much at the other.

For starters there’s the flash-forward, which follows on from that of episode one of season five. Walt’s got hair, a full beard, and a trunk with a machine gun in it. His home — the home of his family — is torn to pieces and vandalized. This seems to take place around half a year* into the future, and it immediately presents us with a sense of false momentum.

That’s okay. Gilligan is toying with us right now. Just as Hank once toyed with Gus…and Walt, until very recently, toyed with Hank. They know more than someone else knows. They’re having fun with it. That’s good. That’s allowed.

But after that, the episode feels almost determined not to move us closer to that point. It’s as though the show itself has received a glimpse of its characters’ futures, and it’s digging in its heels so that they don’t actually have to get there.

Yes, the first batch of episodes ended with Hank finding Leaves of Grass**, which absolutely suggests, as the kids are all saying nowadays, that shit is about to go down. But even that’s toying with us…yes, Hank found the book. But with eight episodes still left to watch, it’s pretty clear that taking Walt down won’t be that easy. It looks like we’re at the edge of the cliff…but really there’s, structurally speaking, a long way left to climb.

So the big moment with Hank on the crapper gives way to an episode that’s…well…oddly peaceful. Walter actually begins working at the car wash. He’s more playful with his kids. Lydia stops by to invite Walt back into the criminal underworld, but he refuses and she doesn’t make a scene. Then Skyler kicks her out of the car wash and she still doesn’t make a scene. Saul gets a massage. Jesse sits silently while his friends discuss Star Trek***.

Shit’s about to go down…but then shit doesn’t go down. And suddenly the massive shakeup in the previous episode turns out to be a storm in a bottle. Hank may feel like the world is crashing down around him…but when the camera pulls out, life continues as usual. It’s telling that the little boy with his RC car is in the background as Walter and Hank finally have it out…he’s toying around too. It’s all a game.

Which is fine, but it really does feel like we went from barreling ahead (the flash-forward) to going nowhere (the car wash) to barreling ahead (Hank slugging Walt) to going nowhere (Walt planting a seed of doubt). It’s a kind of pacing that doesn’t feel particularly well-paced, and it’s doubly puzzling in the face of the fact that there are now only seven episodes left to get Walter to that future point (and then wrap things up from there). Shit’s about to go down? Shit needs to go down…and “about to” can’t cut it for long.

At that point, I’m sorry, Hank really should have just kicked Walter to death in the garage and dealt with the consequences later. God knows he hasn’t been above that kind of street justice in the past, and now he knows an extraordinarily dangerous man is onto him and knows he’s a threat. As dim as Hank might have been to some clues dropped in the past, I’m willing to chalk that up to his basic, fallible humanity. Now…he just seems like an idiot, making the wrong decision while knowing it’s the wrong decision and will likely get he and his wife and sister-in-law and niece and nephew and partner killed. C’mon Hank. This isn’t you.

Am I down on “Blood Money”? It sounds like it, but I really did enjoy it. It’s more of a dip of the toe than a full on plunge, and I just wish it committed to that instead of trying to also qualify as the other.

I will say this, though…Jesse’s attempt to send money to the Sharps and Mike’s granddaughter was the most touched I’ve ever been by this show. Poor Mike worked his whole life — and did some truly terrible things — to give that little girl stability. She was his meaning, and with Mike dead and his original deposits seized, he wasn’t able to leave her with anything. Not even a goodbye.

Jesse steps up — hypothesizing Mike’s death for the same reason Lydia hypothesized it earlier — and attempts to bridge that gap, fulfilling the man’s intended legacy. Only for good ol’ Walter to step in and knock it all back down again, all while convincing Jesse that Mike’s alive, living on a farm somewhere with the rabbits.

The conversation between the two of them was a great exploration of what makes them truly different. They’ve both done and been through some horrible things, but whereas Walter finds it easier to let go and move ahead (with a little bit of his humanity being let go every time as well), Jesse holds onto it. Walter is a man whose ethics have been stripped and worn down by the terrible things he’s done, and Jesse is a man whose ethics are inflamed and troubled by them. They’ve been through the same year, and they’ve been through it together. One of them became a monster, and the other is deeply troubled because he didn’t. It’s great character work.

It’s going to be sad to say goodbye to a lot of these characters. Even the ancillary ones, like Marie. I’m going to miss what Betsy Brandt does with Marie…the way she manages to be just off-putting enough to be loveable for it, the little flourishes of purple around the house so that you know exactly how much say she had in decorating, even just the way she rushes to poor old Hank when he’s at his lowest.

And though we’ve only just met her, I’m going to miss Laura Fraser. Lydia’s skittish professionalism has been an interesting addition to the show, and I’m curious to see where it takes us. She’s also icily, scarily hot. SO THERE’S THAT.

Come on Hank. You’re a better man than you think you are. Do what needs to be done. Otherwise, it’s getting done to you.

—–
* I’m estimating based on things I’m not interested in arguing about so by all means if I’m wrong, let me know. But it reminds me of something interesting: since we’ve seen a more or less uninterrupted year pass in Breaking Bad time, why have we never seen anyone celebrating Christmas? Or New Year’s? Or Thanksgiving or Halloween or Easter or…am I just forgetting? I’m not complaining, but I wonder about that. I can’t imagine many shows following its characters along this methodically for 12+ months without even acknowledging the holidays as they pass. Not that I wanted “A Very White Christmas” or something where Walter is visited in the night by the ghosts of Krazy-8, Tuco and Gale, ending with a celebration of life and Walter Jr. declaring “Good breakfast, every one.” But still.

** Genuine question: what’s the legality of this? If a police officer is in somebody’s home by invitation, say a friend or a family member, and they just happen to find some piece of incriminating evidence that has to do with an ongoing investigation, is it actually admissible? In Hank’s case it’s a physical object, which could easily have been planted, and he didn’t help his case by taking the book with him (though I guess Walt’s — and Gale’s — prints are all over it so that’d have to have been a hell of a clever plant), but no matter what it is…a bloody handprint, a scorch mark from a fired weapon, anything. Could you actually do anything with that? Or does the fact that you weren’t on the clock merit an OJ-style forfeit?

*** Skinny Pete’s right, by the way. It’s a punchline in the show, but in reality there is some science behind the idea that a Star Trek style teleporter would actually kill you, and a copy — not actually you — would come out on the other end. I read an essay about that in some philosophy text years ago. It might have been The Mind’s I. Wherever it was, go Skinny Pete. You found a nut, you blind squirrel you.

EDIT: I just realized Jesse Plemons was listed in the credits, but Todd wasn’t in the episode. I guess there was a deleted scene or something where Todd comes over to pick Jesse up so they can go out and kill some kids, and Jesse was all, “NO I DON’T KILL KIDS THAT IS WRONG” and Todd is like, “IT IS FUN TO KILL KIDS” then he smiles and Jesse says “I DISAGREE WITH YOUR WORLDVIEW” and they punch each other.