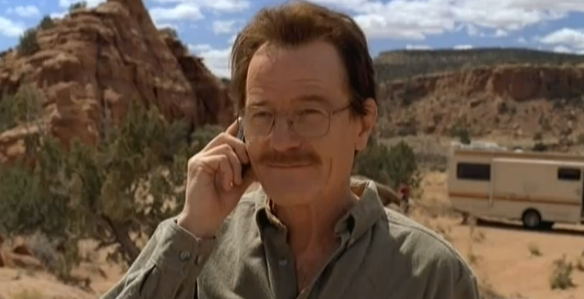 Years ago, around the time the Watchmen movie came out, I was speaking with a friend of mine. He said he didn’t like how obviously the film framed Ozymandias as a villain; in my friend’s opinion, the graphic novel left that much open for interpretation.

Yes, the character was indeed responsible for the loss of many lives. But ultimately, my friend argued, it was worth it. He did it for the right reasons, and there was a substantial net benefit to the carnage. There was, at least arguably, a justifiable ends to the means.

And throughout season five of Breaking Bad — both halves — I’ve seen people defending Walter for the same reason. Of course we can criticize his methods…but isn’t he doing these things for the right reason?

After “Ozymandias,” I think somebody would have to work pretty hard to defend any aspect of Walter White’s character. This was comic book Ozymandias sliding into silver screen Ozymandias*, right before our eyes.

We might have been able to make those arguments before. It was ultimately for his family. He was loyal to Jesse. If there was any way to minimize the violence, he would.

…but not anymore. Walter is a villain. There is no debating it. And perhaps you’ll be disappointed for the same reason my friend was disappointed. I can sympathize, if that’s the case; it’s always more satisfying to be able to explore shades of grey for ourselves than it is to have the world broken into blacks and whites.

Oh well. These aren’t our rules. We’re not entitled to anything. We crave things that we can’t have.

“To’hajiilee” ended where it did because if it had continued even one second further, we would have known. We would have known there was no hope. Like Grandpa Joe in Willy Wonka and the Chocolate Factory deciding not to tell Charlie that the final golden ticket has been found, the show needed to let us have just one more dream.

The cold open of “Ozymandias” makes the distinction as clear, cold, and inarguable as it needs to be. We get a flashback to the afternoon of Walt and Jesse’s very first cook. Back to when we could sympathize with Breaking Bad‘s main character. Back to when Jesse was not broken and could still function as comic relief. Back to when there was a future to look forward to…whether that was financial stability for the Whites, or something as simple as a pizza with the family after a long day.

But it fades. As it must. And it’s replaced by the direct and fatal result of those seeds planted with the best of intentions: Steve Gomez dead on the ground. Hank about to be shot through the head. And Walt brainlessly bargaining his money away for nothing.

All of the bodies. All of the blood. All of the carnage and the treachery and the deceit. The innocent and not so innocent lives caught in the crossfire. Gale. Mike. Gus. Drew Sharp. Jane. They were all inside of those barrels. And Walt traded them away. For nothing. Hank is dead. As it had to be.

And just as I was able to feel sorry for Walter toward the end of the last episode, for the first time in what feels like ages, I was able to feel for him again here…bargaining with the only thing he has left, and losing it all. When Walter fell to the ground my heart fell with him. Hank could not be spared. Of course he couldn’t. We hoped anyway. And then he was gone.

And as solid as the contrast between the cold open and the action of the episode, we saw how Walter handled his next problem: he turned in Jesse Pinkman, consented to his torture, and then plunged and twisted an unnecessary blade into the boy’s heart.

This isn’t Heisenberg. This is Walter White.

I think everybody has their own idea of when Walt finally became irredeemable. Fittingly enough, a very common one is the moment he let Jane die. Bryan Cranston himself seems to think it happened in the very first episode, simply because he allowed himself to become something he wasn’t. For me, I’d say it’s when he killed Mike. Not because Mike was a saint or a hero, but simply because of the context of the killing: Mike was no kind of threat. Mike was on his way to a new life, to ride out the rest of his days as a quiet old man in a place where nobody could hurt him. Any other time Walt killed, there was some justification…sturdy or not…that it was that, or be killed himself. But in the case of Mike, he was just being a dick.

And, of course, there are those who continued to feel that Walt was redeemable. That there was no moment that permanently shifted him into the realm of being hopelessly lost.

“Ozymandias” was difficult to watch. I started working my way back through Breaking Bad when this half season began, and it’s amazing how much the show changes as it goes on, without ever actually losing (or even substantially altering) its identity. The worst of Walt was present from the start…it was just easier to overlook in the face of his more realistic goals, his identifiable concern for his family, and the basic comedy inherent in his situation. After all, he’s a chemistry teacher who teams up with a former student to cook meth. That’s a can’t-miss premise…and sure enough, it didn’t miss. Hank’s body, buried in To’hajiilee, will attest to that. This is where it all had to go.

And all of this — all of it — follows on directly from the previous episode. Marie visiting the carwash? Yep, that’s the same shift that just featured the Saul and Junior double act. Hank’s brains being blown all over the desert sand? Yep, that’s the same plan that followed on from the comical interrogation of Huell. That’s why “To’hajiilee” broke where it did. This is another chapter…tightly related to what came before, but completely, totally, brutally distinct.

As my uncle used to say…it’s all fun and games until somebody loses an eye.

I’m also genuinely in awe of just how callously the episode handled the death of a major character like Hank. That is to say…it just kept going.

No beautiful shot of the violence, no slow motion collapse…no gentle pop song to give us pause. Just a bullet, and then it’s time to dig up the money. It was made more painful simply because we didn’t have time to dwell. We wanted to go back…

…but there is no going back.

Just further into the future.

I hope you got your laughs in last week. I hope you enjoyed that brief flash of happier times that opened the episode. And I hope Jesse Pinkman got a good, long last look at those birds.

—–
* Yes, I’m aware that the Watchmen Ozymandias isn’t what’s being referenced here. I just thought it was an interesting parallel. And I’m still kinda reeling SO SUE ME